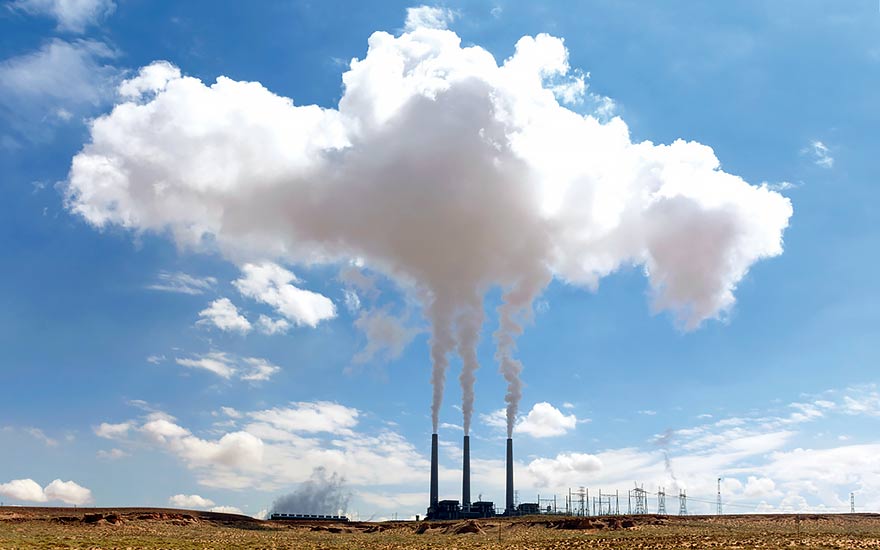 Those who arrived later had to park alongside the roadway or elsewhere. Some jobseekers waited in a long line for at least three hours before the facility opened its doors at 10 a.m.
“We didn’t know what to expect,” said Daniel Wilson, engineer at SRP in Tempe, Arizona. “This is certainly a lot more (people) than we expected.”

Wilson said SRP selected several major contractors for the decommissioning project, but only two of the contractors – Ohio-based Independence Excavating and Indiana-based National Salvage and Service Corporation – were at the job fair on Monday.

Independence will be working on the removal of the power block (three 800-megawatt generating units) at the plant. This will begin in January 2020 and continue through 2021.

“And then National will be removing the catenary system on the railroad,” Wilson explained. “So the railroad’s going to remain for the Navajo Nation, but the catenary, which is the wires and the poles –basically the electrical components – that’s going to be removed.”

Wilson said National’s work will begin some time next month and continue through fall 2020.

National will be removing more than 2,500 catenary poles, electrical wires, supports, brackets and support poles along 81 miles of railroad tracks. The railroad, as part of the NGS extension lease, will remain on the ground.

“We’re also going to have one to two civil contractors that will be awarded at a later date and we’ll be having another job fair probably in a couple of months with them,” Wilson said, “and there will be a lot of jobs associated with that as well.”

Independence’s sub-contractor, Earth Services and Abatement from Commerce City, Colorado, was also at the job fair. Earth Services, Wilson says, will be doing all the abatement work.

NGS’s Unit 3 went offline in September, shortly after receiving its last delivery of coal from the Kayenta Mine on Aug. 26.

Wilson said the remaining coal will be burned and units 1 and 2 will go offline next month.

“We can burn coal up until Dec. 22, 2019, but we anticipate being done earlier,” Wilson said. “So those units will come offline likely in November at some time and then we’re going to have some folks at the plant do some initial de-energizing activities.”

Wilson said SRP is looking to hire around 150 people for the decommissioning project, but that number could be higher if it includes sub-contractors.

“So all of the workforce that has taken jobs down in SRP in the (Phoenix area) has been replaced with contract work, so that typically hovers around 450-500 employees … under NGS management,” Wilson explained.

SRP has a joint consultation with the Navajo Nation and meetings have been taking place, said Wilson, who was part of the negotiations for the extension lease, which was signed by President Russell Begaye and then-Vice President Jonathan Nez in July 2017 in Twin Arrows, Arizona. The lease allows for a five-year period to decommission the plant.

“We’re going to start meeting with them more regularly,” Wilson said of the Navajo team, “basically on a monthly basis. We coordinate with them and work with them on retirement or decommissioning activities with the plant.”

“Specifically, we’re looking to supplement the contractors that are doing the work out of the plant,” Cereske said. “So any fluctuation in the workforce, we’ll be able to supply them with flexible contingent labor and skilled trade.”

Cereske said when NGS completely shuts down just two days before Christmas this year, it’ll be a huge economic hit for the area.
“It’s kind of sad to see, in my opinion,” he said. “It provided a lot of jobs for a very long time. Disappointed that they’re ending up closing it, but this will be kind of a little bit of way to help the community before they leave town.”

Cereske added that anybody who was signed up for a job with Tradesmen on Monday will be offered a job in this state, Utah, Colorado, New Mexico or in Nevada, and they will be offered travel pay to work.

One jobseeker, who did not want to be named, said she recently returned home from Sulphur, Louisiana, where she was working for the Chicago Bridge and Iron Company, and was looking for another job. She said she visited all the booths and applied for several jobs and is hopeful that she gets a callback soon.

“They should have opened the door a little earlier so we can do all of our paperwork and have more time to do everything,” she said. “I’m done, now I’m going to wait for a call.”