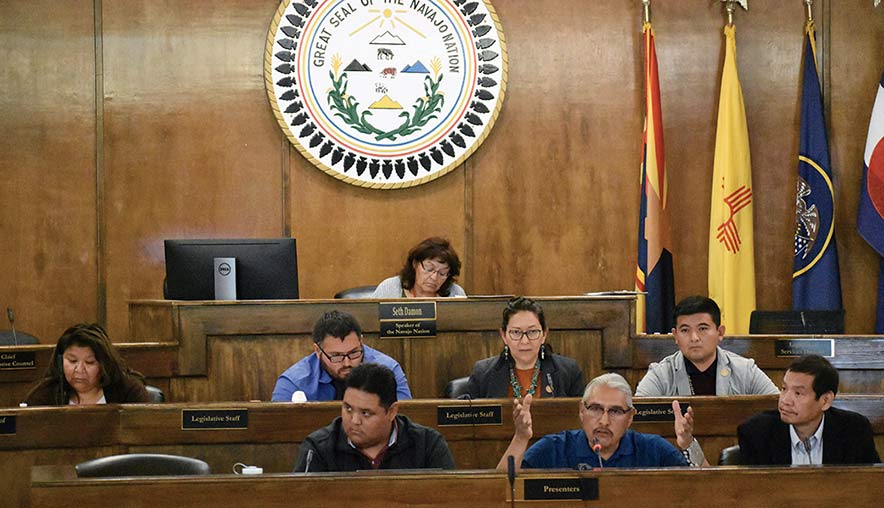 In the past six months, leaders have learned that planning the energy future for the Navajo Nation is no easy task, especially in the face of changing markets, declining revenues and a shortage of energy experts at the table.

Delegate Elmer Begay’s renewable energy bill (No. 0073-19) had been around the block more than a few times since it was proposed last March and was the subject of numerous legislative work sessions, debates and proposed amendments.

In a shock to many in the Council Chamber, it finally died on Tuesday during the fall session when delegates voted 10-7 against reconsidering the bill.

“I was very confused by the actions of this Council and specifically, the members of RDC (Resources and Development Committee),” said Begay. “There was no opportunity to speak on the final product. They just voted on it.”

The bill’s demise was not due to a lack of support for prioritizing and clarifying the Nation’s energy policy, but instead because the powers that be could not come to consensus on how that should proceed and who should be responsible.

“I feel that this is a horrible mistake that the Navajo Nation Council has made,” said Percy Deal, former Hard Rock Chapter president. “Everywhere else around us, people are improving on their energy policy to go from coal to renewables. We’re the only government in the Southwest that is not moving in that direction and we’re going to lose big.”

While Begay’s bill failed, it definitely got everyone thinking about what the roadmap to future energy development might look like.

“I listened to the people,” said a dismayed Begay, who has consulted with everyone from “grassroots” people to medicine men. “I did everything that the Council and RDC requested, so I don’t understand why they killed the bill. They had every opportunity to make objections and comments. It’s just a real big surprise that there was no more support for this legislation.”

As originally proposed last March, Begay’s legislation would have rescinded the 2013 Energy Policy to be redrafted by DOJ in favor of moving “beyond coal” toward “sustainable and renewable energy sources,” and would have established an NGS/Kayenta Mine transition task force.

In last July’s summer session of the Council, after another round of debate, the bill was referred back to RDC with a directive that it be returned to the fall session.

However, not much progress was made in the past four months and the Council requested that RDC have another work session with sponsor Elmer Begay, which took place Oct. 14.

The goal of the work session was to clarify the intent of the legislation and discuss the impacts of rescinding or updating the Nation’s 2013 Energy Policy.

In attendance were members of President Jonathan Nez’s Háyoolkáál Work Group, made up of directors of key Navajo Nation divisions and president’s office leadership, and members of the Office of Government Development and environmental protection groups, who assisted Begay in crafting the legislation.

The work group was formed by Nez last April to work toward creating “a new economic vision for the Navajo people through healing the land, fostering clean energy development and providing leadership for the energy market,” in line with the Nez-Lizer Háyoolkáál renewable energy proclamation.

In the work session, Begay again put forth amendments that changed the main focus of the bill to creation of an “Energy Policy Task Force” that would guide the process to update – not rescind – the 2013 Energy Policy, in line with fundamental law.

“Our intent is ‘How do we update the energy policy?’” said Begay at the time. “We know the earth is alive, the earth, sky, air, water. How do we preserve and protect it? How do you go about it? Who does it? That’s why we’re trying to create the task force.”

Some delegates questioned whether the new amendment changed the original intent of the legislation altogether but RDC’s legal advisor said it did not.

By the end of the work session, RDC and the work group did agree on one thing—that it was in the best interest for all that the two groups work together to tackle the issues.

They decided to schedule another work session in November where they would invite energy and fundamental law experts to present their thoughts and ideas.

Begay agreed to this proposition, and also allowed the bill to go back to Council again by default.

However, now that the bill is moot, the joint work session also goes away along with it, said RDC Chairman Rickie Nez on Tuesday.

“We told Elmer that we agreed to have a work session to reconsider the legislation,” said Nez. “But somehow he decided to put it on the Council agenda and it happened the way it did.
“It’s over. It’s done,” he said.

Nez said that in moving forward RDC plans to hold an “energy summit” in December along with another work session with Jonathan Nez’s work group to consider amending the 2013 Energy Policy.

Meanwhile, Nez separately sponsored bill No. 0271-19, also on the fall session agenda, that would amend the 2013 Energy Policy to “authorize the creation of the Energy Office within the Division of Natural Resources,” which many agree is long overdue.

As it stands, the 2013 Energy Policy, which remains in force as is, includes a mandate to establish an independent Navajo Energy Office that would serve as a “clearinghouse” for energy projects and development, but that has not happened.

In the Oct. 14th work session, Division of Natural Resources Deputy Director Michelle Henry said that the 2013 Energy Policy had actually amended the 1980 Energy Policy and the process took two-and-a-half years to complete.

She said that included taking the policy out to the public for comments, which were incorporated into the updated policy.

“It took some time and a lot of effort and dedication,” said Henry.

Henry clarified that Nez’s work group was created to work on issues related to energy mainly because the energy office wasn’t yet established and they were receiving energy development proposals that need to be vetted.

Division of Economic Development Director JT Willie stressed that as the group looks toward the future in regard to renewable energy it is also working directly with chapters, particularly those most impacted by the Navajo Generating Station and Kayenta Mine closures.

“We want to make sure projects are beneficial for economic development and local communities,” said Willie.

Division of Community Development Director Pearl Yellowman said her division is already providing technical assistance to chapters that want to explore renewable energy projects, and is working to establish criteria and gain an understanding of what resources are out there in the different regions.

Willie said the 2017 Navajo Nation Economic Roadmap from the prior administration was being used as a guide and emphasized the importance of seeking out individuals with the proper expertise to inform their work with “professional insights,” whether it be from academia or industry.

“We are here to make sure whatever we do is good for human health and environmentally friendly,” added Navajo Nation Environmental Protection Agency Director Oliver Whaley. “We are covering a lot of new ground as we move forward.”

Department of Justice and RDC attorney April Quinn made a point to remind everyone at the work session that the Four Corners Power Plant and Navajo Mine are still operational.

While the goal of the working group is to focus on renewable energy and diversify the tribe’s energy portfolio, coal is still part of the mix — and unlike renewables, it yields royalties, she said.

“The Four Corners goes to 2021 and the Navajo Nation can’t terminate that lease,” she said. “Also, oil production leases can’t be terminated either as long as they’re in production. Legally, we have no right to end all fossil fuel on the Navajo Nation.”

Questions came up about if there were an Energy Policy Task Force, the Háyoolkáál group, RDC, and an Energy Office, who would do what, how would they work together, and who would be the final authority?

“It seems like there’s a lack of communication and a lack of teamwork,” said Delegate Wilson Stewart.

“It’s difficult to know how to craft legislation if we’re going to be creating a duplication of services,” said Stewart, who recommended scrapping the work session and starting over with the legislation. “It’s just built up so much to where we can’t even untie it.”

“I think there’s too much confusion with this legislation,” said Slater. “The Nation has never proven its competence in going after these larger ideas and goals because we can’t break them down into specific objectives. We don’t have the follow-through and the coordination between the branches as the government is set up now. It seems like we’re operating in silos.”

Slater emphasized that the process needs to ”have vision about where the Nation is going” and what can realistically be accomplished over the next 50 to 100 years.

“We should be discussing the merits and the substance of the policy right now instead of tripping over ourselves trying to define what the process is going to be,” said Slater.

Rickie Nez also suggested that the energy policy should also go back to the Navajo people again and recommended conducting public hearings at all five agencies.

”I think the people have to have some input,” said Nez.

At the end of the day, Speaker Seth Damon said the termination of the bill by Council sent a message that the legislative and executive branches need to work closely together to put an energy policy in place.

“Some members of RDC are saying, ‘We can talk about renewables, but we need to talk about how we’re going to get there,’” said Damon.

He stressed that since the Nation currently still relies heavily on fossil fuel revenues, a transition has to be planned that directs some of those monies to funding renewable energy projects.

That, in fact, was the original mission of the Navajo Transitional Energy Company, he said.

“The Navajo Nation, like it or not, is a natural resource energy nation,” he said.