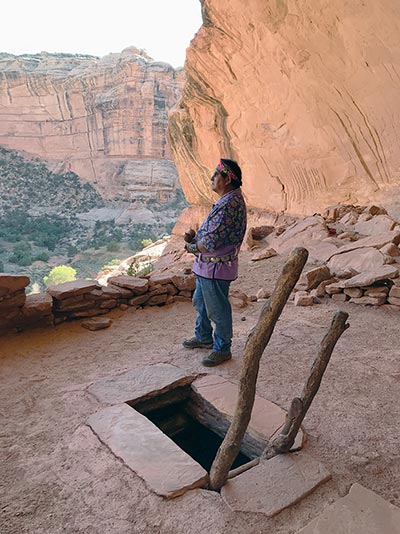 Hopi Chairman Timothy L. Nuvangyaoma and Vice Chairman Clark W. Tenakhongva attended the signing of the proclamation along with other federal, state and tribal leaders, according to a news release from the Hopi vice chairman’s office.

“The signing of this proclamation and the restoration of Bears Ears is an important victory for all Native people,” Tenakhongva said. “On behalf of the Hopi people, I thank President Biden, and Secretary (Deb) Haaland, for upholding the commitments they made to our Native communities, and I am pleased that we were able to work together to bring this issue to a successful resolution.”

This move comes four years after former President Donald Trump stripped protections away from the Bears Ears National Monument, a place sacred to surrounding Native nations, reducing the area by 82%.

The Bears Ears monument was originally established in December 2016 by the Obama administration following a multi-year effort by Indigenous-led organizations to protect the public lands.

The creation of the Bears Ears monument was significant because for the first time in history, Native nations were given a voice in managing a national monument as the proclamation called for the establishment of a Bears Ears Commission, staffed by a representative of each of the tribes comprising the Bears Ears Inter-Tribal Coalition.

These tribes include the Hopi Tribe, Pueblo of Zuni, Navajo Nation, Ute Indian Tribe (of the Uintah and Ouray), and the Ute Mountain Ute Tribe.

Upon assuming office in December 2017, Tenakhongva was appointed via Hopi Tribal Council resolution to the Bears Ears commission, replacing outgoing Hopi Vice Chairman Alfred Lomahquahu, who along with the Hopi Cultural Preservation Office, played a key role in establishing the coalition and in ensuring the national monument declaration.

Extending his priorities for the preservation of Hopi culture, history and language, Tenakhongva, as co-chair of the coalition, continued efforts to protect Bears Ears from vandalism, commercial development and other activities while also keeping the area accessible for the traditional and cultural practices of the tribes.

In April 2021, as Secretary of the Interior Deb Haaland toured Bears Ears as part of her executive-ordered review, Tenakhongva and other tribal leaders voiced support for the restoration of the monument to its original boundaries.

“Meeting with Secretary Haaland was a valuable opportunity to share the true significance that Bears Ears—Honmuru—has for the Hopi people,” Tenakhongva said.

“This landscape is an ancestral home to many Hopi clans (that), in the past, migrated throughout the Four Corners region, and the responsibility to educate and impart to others the value and history of this place is a not one that I take lightly.”

Following the signing of the proclamation, Biden was gifted with a hat, Hopi tribal flag, and a Hopi veteran’s lapel pin by Tenakhongva, to which Biden reportedly responded, “Clark, you are one man who has worked so hard on this matter, and I have so much respect for you. You never gave up. Please continue the work of the Nation, your people and the world.”

Yet despite the restoration of the monument, legal battles surrounding the monument will likely continue and require Hopi involvement.

Following President Trump’s action to revoke and replace the Bears Ears National Monument in 2017, the Native American Rights Fund, representing the Hopi Tribe, the Pueblo of Zuni and the Ute Mountain Ute Tribe, filed a lawsuit against the Trump administration.

The suit claimed such action was not only an attack on the five sovereign nations with deep ties to the Bears Ears region, but was a complete violation of the separation of powers enshrined in the U.S. Constitution. The suit also asserted that no president had ever revoked or replaced a national monument before because it is illegal to do so. Only Congress may alter a monument.

However, this lawsuit has been on hold since Biden issued an executive order in January of 2021 to look further into the matter.

Regardless, Biden’s decision may not prevent future lawsuits, with Utah Gov. Spencer Cox already having stated that he would sue Biden if he restored the monument.