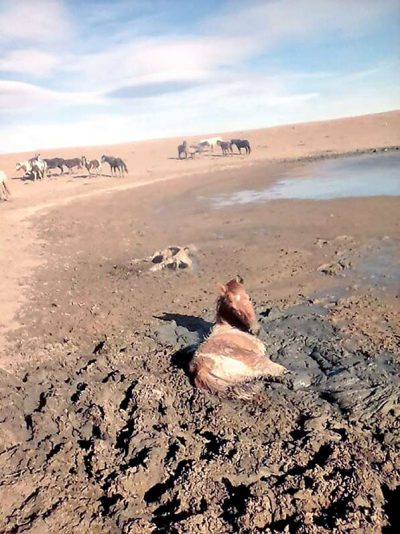 Fish & Wildlife Department | Courtesy photo
Near Salina Springs, Ariz., a horse struggles in mud near a water hole, while a dead horse lies nearby, and a herd of horses look on as they attempt to find a way to the water. Gloria Tom, director of the Navajo Nation Department of Fish and Wildlife, said 80 horses were removed from the area last week.

The Navajo Nation president’s office said the growing population of feral horses has to be addressed with a drought expected in the coming season – but not by hunting them.

In a Tuesday news release, President Russell Begaye announced the cancellation of a horse hunt proclamation posted on the Navajo Nation Department of Fish and Wildlife’s website.

The hunt would have given hunters a bag limit of one feral horse, with tags running at $10, and the possibility of more tags becoming available if there were leftover permits.

The proclamation would have allowed the taking of non-branded mature stallions and mares without colts present. Individual hunters would have had to be escorted by a wildlife conservation officer.

Hunting would have been prohibited within one mile of a community and within half a mile of an occupied residence.

“My administration will not condone a horse hunt for controlling the overpopulation of feral horses,” Begaye said in a statement. “But we do need to implement a management plan to preserve and protect Navajo land for future generations.”

Begaye’s statement said an immediate threat exists in the likelihood of an upcoming drought.

According to the president’s office, the Navajo Nation Commission on Emergency Management on Monday approved a state of emergency drought declaration.

The president’s office said the commission is anticipating large-scale drought conditions this summer, which will create a critical shortage of water and range feed for livestock, resulting in the poor physical condition of livestock and an increase of disease.

Herman Shorty, chairman of the Navajo Nation Commission on Emergency Management, confirmed the accuracy of the statement and said a research tool called the “standard precipitation index” had indicated the likelihood of a drought.

The SPI allows researchers to use historical data in an area to determine precipitation rates, which Shorty said put parts of Arizona, New Mexico, and Utah overlapping the Navajo Nation at drought levels.

The president’s office made clear in their statement that the hunting proclamation has been rescinded.

Gloria Tom, director of Fish and Wildlife, pointed out that the proclamation covered only Big Game Management Unit 12 in the Carizzo Mountains.

A memo from the president’s office received moments before deadline and Tom confirmed that she authorized the proclamation on Feb. 14.

“The department made the determination to address the overpopulation of feral horses on Carizzo Mountain,” Tom said.

She said the department anticipated a need to remove about 120 horses in that area, and would proceed with alternative means of removal.

She said the department is working with a New Mexico animal rescue group to remove that number from rugged and wooded terrain, unlike open areas where feral horses also live.

“Horses are going to be difficult to get to there,” she said.

The president’s office referenced a 2016 study conducted by Fish and Wildlife, which the Navajo Times had seen in part and used in reporting in March 2017 after a hunting expo where the possibility of a hunt was discussed.

“One horse consumes approximately 32 pounds of forage and 10 gallons of water per day,” the president’s office said. “The Navajo ecosystem cannot support the number of feral horses that exist.”

The statement said the feral horses have heavy populations in remote locations and winter range areas like the Carrizo Mountains.

Feral horses competing with mule deer, elk, or even sheep are aggressive and push other species out of a given area Tom said.

She also stressed the impending threat posed by the upcoming drought.

“It’s really important for people to realize that we’re in an extreme drought situation,” she said.

She sent photos and an email that demonstrated that feral horses face dangers in current conditions, and showed how removal could avoid potentially painful deaths for them.

She said photos were taken near Salina Springs, Arizona, of dead horses in the mud surrounding a small pond and live horses still stuck in the mud.

She said all the animals were trying to get to the water in the small water hole as it quickly dried.

She said Navajo Nation Rangers rescued some horses alive, but some horses had to be put down because they were too weak to stand.

“Those types of situations are going to happen more and more, because our precipitation situation isn’t good,” Tom said.

She said Natural Resources has developed a strategy to manage the feral horse population. A copy of the strategy stated that the division has documented extensive damage to the land, wildlife habitat, vegetation and other natural resources by the overpopulation of feral horses on the landscape.

The Horse Management Plan includes methods other than hunting, which include trapping, castration, birth control and adoptions.

In response to comments and inquiries regarding the hunt proclamation, Navajo Nation Council Speaker LoRenzo Bates issued a statement prior to the statement issued by the president’s office.

“ … the former Resources Committee delegated its authority in 1993 to the Division of Natural Resources to approve the annual hunting and trapping of wildlife and the scheduling of fees,” Bates said.

He said his office was not aware of the executive branch’s decision to issue “special permits to take feral horses.”

“As Navajo people, we are taught to respect all life forms and that includes horses,” Bates said. “Considering the cultural and historical factors and concerns over water shortages and overgrazing – this is certainly an issue that should have been brought before Navajo leadership and medicine people to discuss and consider.”