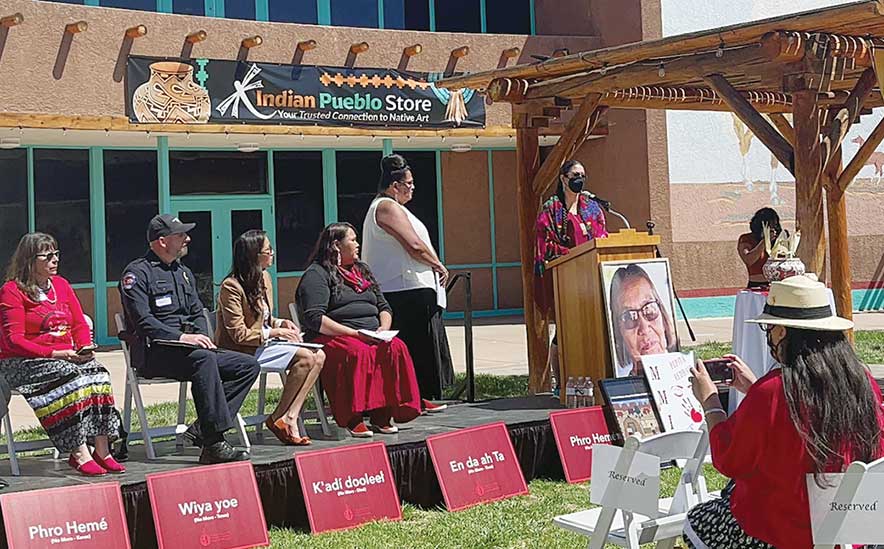 Courtesy photo | New Mexico Indian Affairs Dept.
On May 5, New Mexico released its official state response plan to respond to the Missing and Murdered Women and Relatives crisis in the state.

On May 5, the New Mexico Missing and Murdered Indigenous Women and Relatives Task Force released its state response plan at the Indian Pueblo Cultural Center in Albuquerque for how to confront the crisis.

“We honor and acknowledge the strength and perseverance of all survivors and families who have shared their experiences and testimonies with the task force and helped guide us with recommendations,” said Lynn Trujillo, secretary of New Mexico Indian Affairs and MMIWR Task Force Chair.

“It is our responsibility to continue working towards identifying and breaking down systemic barriers while creating safe spaces and healthy communities for our Indigenous relatives,” said Trujillo.

In a statement to Navajo Times, MMIWR task force member and first lady Phefelia Nez thanked the state for allowing the Nation to be a part of the “historical movement” of “reuniting, restoring, and healing” Native families and communities.

Since the task force was established by Gov. Michelle Lujan Grisham in 2019, Nez said it has identified gaps in case response, jurisdiction misinterpretations, and the need for coordination among tribal, state and federal partners.

She said the plan reflects the collaboration of key partners who shared a common vision to assist law enforcement, provide victim services, and bring loved ones home.

“The release of the report also signifies that we are moving closer to minimizing the number of unsolved MMIWR cases on the Navajo Nation and in New Mexico,” said Nez.

In 2020, the National Crime Information Center reports that 5,295 indigenous women and 4,276 indigenous men were missing in the U.S.

“Our Indigenous relatives experience some of the highest rates of cases involving MMIWR and this really reinforces the point that we must continue working together to streamline safety responses, establish prevention and data-drive initiatives to protect our Indigenous people,” said Trujillo.

“Sadly, we still don’t know how many Indigenous relatives are reflected in this broad number,” said Trujillo. “Our work is underway to improve how New Mexico is collecting missing persons data.”

Anita King, from Crownpoint Chapter, said although it is painful to talk about, she was honored to be at the IPCC event where she again shared the story of her daughter Pepita Redhair, who went missing in 2020 in Albuquerque.

King describes the grief and anguish of not knowing what happened to her 27-year-old daughter.

“Pepita M. Redhair was last seen on March 27, 2020,” King testified. “She was last seen in this very area, right here… but the exact circumstances of the situation remain unknown.”

King struggles with the fact that the burden of continuing to raise awareness for missing loved ones falls on families like hers with limited resources, which takes an additional toll emotionally and financially.

She also believes the lack of communication and support from law enforcement both in Albuquerque and on the Navajo Nation caused delays in her daughter’s case investigation, without which her daughter may have been found.

“For the last two years and 29 days, we have placed flyers on street posts, on windows and inside businesses, held prayer walks, rallies, hoping that someone will speak on what they’ve seen or heard,” she said. “We’ve searched every inch of the area for her and will not give up until we know the truth behind her disappearance.”

Lujan Grisham said it is critical that every available tool is used to deliver resources to the loved ones of missing people and bring more awareness and public attention to cases.

“I am deeply grateful to the members of the New Mexico MMIWR Task Force, the family members, and the statewide advocates for lending their voices and expertise to the state’s response,” said Lujan Grisham. “Together we will continue to do everything in our power to bring closure, justice, and healing to New Mexico’s tribal communities.”

“Because of the work and testimony of mothers, fathers, daughters and sons across our state, the epidemic of Missing and Murdered Indigenous Women and Relatives has been pulled into the light,” he said. “No community should have to answer this call to action alone.”

Bernalillo County District Attorney Raul Torrez said his office, which represents the largest county in New Mexico, is the first in the state to have created an MMIWR Task Force Unit to help solve cases and share data amongst law enforcement and government partners.

The unit has recently hired a dedicated analyst and investigator who are working full time to address jurisdictional issues, compile data and share information so that justice can be delivered, he said.

“I think the publication of this state response is an extraordinary first step, but as the secretary mentioned, it’s the beginning of a very long journey,” said Torrez.

He said the DA’s office is most acutely focused on trying to break down the barriers and the “siloed systems” that law enforcement relies on in trying to address MMIWR.

In addition to working on building a new data platform that will integrate information from different agencies, Torrez said his office is working on setting up MOUs, including with the Navajo Nation, to facilitate sharing of information about open missing persons investigations or any leads that may be generated.

“It’s sad that it has taken this long for this issue to get the attention it deserved, but my hope is that if we get strategies in place like they’ve outlined in the report, and we get all the stakeholders together and we get them committed to doing just basic things like opening up their data systems, then we can start to have a real impact on people’s lives,” said Torrez.