‘I stand for humanity’: Bearsun returns to Diné Bikéyah for three-day visit 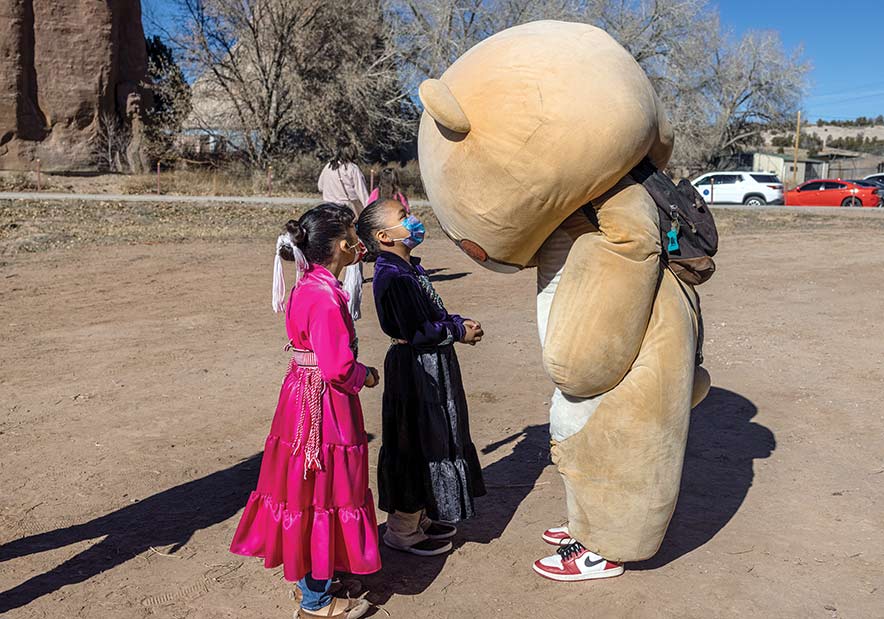 Special to the Times | Sharon Chischilly
Siblings Reema Deerwater, left, and Harlym Deerwater, middle, ask Bearsun a question at the Zoological and Botanical Park in Window Rock on Nov. 26.

Bearsun and his friends had a Thanksgiving meal with the president last Thursday.

The next day, Bearsun, the teddy bear suit worn by 33-year-old Jessy Larios of Los Angeles, had a busy day at the Zoological and Botanical Park and at the fairgrounds where he received hugs and gifts from fans, signed autographs, ate more food, posed for photos, and ended the day by doing a voiceover for KTNN.

Larios said he brought Bearsun back to Diné Bikéyah on Wednesday and left on Friday evening. And on Saturday, Bearsun spent the day with Hualapai’s People of the Tall Pines dancers at the Museum of Northern Arizona in Kin?ání-Dook’o’oos?ííd.

“I’m not home yet, unfortunately,” Larios said in an interview with the Navajo Times on Monday morning. “I’m close to Las Vegas, (Nevada).”

Larios’s goal was to walk from Los Angeles’ Little Tokyo neighborhood to Times Square, a focal point of Manhattan in New York City, inside a 70-pound suit to raise money for five different charities.

He started his walk on July 5 and reached the finish line on Nov. 14. Larios completed the 3,000-plus-mile walk in 134 days, braving the wilderness and the elements.

From inside his Bearsun suit, Larios met thousands of people (and animals), during his walk through 11 states. And many people and animals walked alongside to support him and his causes.

“It was really fun,” Larios said about returning to Diné Bikéyah for a three-day visit.

“The zoo, I got to meet people there, and the animals too,” Larios said, adding that he met with the shash.

“I revisited some people,” he said, “familiar faces that I remember walking with (when) I trekked my way through this part of the Navajo Nation. I had a blast.”

Larios said returning to Diné Bikéyah was a different experience because he wasn’t on the move, and he had more time to meet more people. Diné Bikéyah is where the idea of Bearsun gained momentum and its creation – that blinds society to its gentle, kind nature – represents, said Larios.

While Larios’s real life is fairly a mystery, he said he knew there would be a time he would have to expose parts of his body, such as an arm, a leg, or feet, to the public.
For his own protection, he didn’t quite allow more than a few people to know his appearance.

To most, Larios is only known by the Bearsun suit and his voice and laugh while his identity remains anonymous. This is where trust comes into play for his fans.

For instance, Larios had to extend his arm out from Bearsun’s mouth to sign autographs and he had to expose his ankle and part of his leg to put on moccasins.

“There was going to come to a point where I was going to have to show an arm or a leg, or something like that,” Larios explained. “It was bound to happen. It’s also connecting to people. That’s OK.

“People didn’t expect a hand to come out of (Bearsun’s) mouth like that,” he said. “But adding to the experience, to the character, it’s even more bizarre. But people ended up liking it even more because of that. It was a positive thing.”

When he was given time to introduce himself at the zoo during Navajo Nation Heritage Day, Larios took a microphone inside the suit.

“I eat in there (too),” Larios said. “People ask, ‘How does he put a whole bowl and a whole plate inside the suit?’”

There’s enough room for a plate of food to fit inside the suit, said Larios. And there’s wiggle room.

“That’s how I eat when people hand (food) to me,” he added. “I eat inside the suit. It kind of gives people that cartoon feeling, right? It’s bizarre and it played out well.”

Larios’s Bearsun suit has been with him through thick and thin, but he isn’t going to throw it away even though it is in tatters with tears, holes, safety pins, and sewing by seamstresses and dressmakers like Felix Earle of Earle Couture.

When Larios in his Bearsun suit first arrived in Window Rock in early August, he needed help patching up the suit and his fans obliged, and found him Felix Earle, who spent several hours repairing the Bearsun suit.

“It was pretty interesting,” Earle told the Times. “It’s a costume. Working on something or fixing something like that like what (Larios) has is put together a lot differently.

“The mechanics are pretty much similar but then the actual technique and the process of putting together a suit like that was pretty interesting,” he said.

Earle, a Diné fashion designer, said he’s never worked on a suit like Bearsun and now he’s got a good idea of how a suit is made.

“It was made very, very well,” Earle explained. “The biggest problem I ran into was the padding. It’s entirely padded and entirely lined. It was impressive. But I did my best.

“The quality of the fabric was losing its integrity (at the time he repaired it),” he said. “It was polyester fabric. If you’re walking in that and the friction continues, obviously you’re going to start getting wear and tear.”

Earle’s sewing skills were put to the test that day, and the experience took him to the next level.

“I had to take apart what the previous person did,” Earle explained. “I had to remove all of that, and I went from there and started piecing things back together. It was so awesome.” 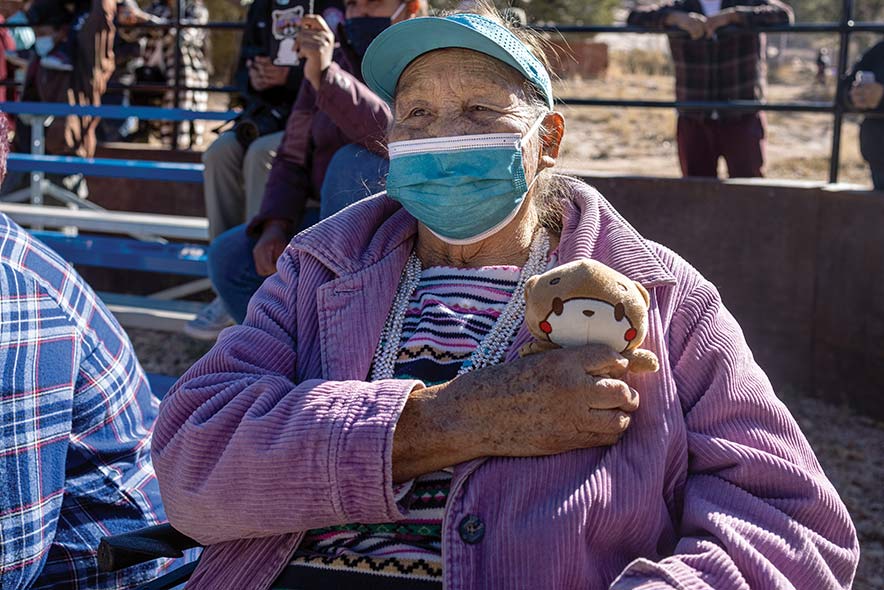 Special to the Times | Sharon Chischilly
Isabell Mitchell holds a Bearsun plush while Jessy Larios, inside his Bearsun suit, speaks to a crowd the Zoological and Botanical Park in Window Rock on Nov. 26. Mitchell followed Bearsun’s journey all the way to New York. Every morning she asked, “Háadi shiyáázh, Bearsun?”

Earle said Larios carried around a piece of Bearsun’s fabric.

“He handed over a piece of the fabric the outer shell is made from and said, ‘I don’t know if this will help’ and he gave me a piece of it,” Earle said. “And it did. I took some pieces out of that and reinforced the existing fabric on the suit and with that I was actually able to do a lot more mending.”

Earle said when he first saw Bearsun at the fairgrounds during his initial visit, he took a gander at the suit and saw that most of the damage was around its bobbly tail.

“The tail was ready to fall off and it was being held by a safety pin,” he explained. “I knew then it would take a while. It wasn’t something you could take a hand needle and run some thread through.”

Earle repaired the Bearsun suit in about six hours as a kind gesture.

“It was being held together by several safety pins,” he added. “Once I was finished, I handed it back to (Larios) without any safety pins. He was pretty excited about that, and he was kind of embarrassed about it because it (the suit) had a bunch of safety pins.

“I joked he would be a ‘patch-work bear’ by the time he made it to New York,” he said. “I trusted my ability.”

Earle said he learned his skills from his late grandmothers who were seamstresses.

“All of us wanted to be part of (Bearsun),” Earle added. “He gives us hope. That’s the reason.

“At the same time, we have to respect his wishes,” he said.“If you really want to do something, make a difference, have your voice heard, go to his website and donate to his causes.”
Larios is now preparing for another journey across the country – a run from Miami to Seattle in January 2022, while wearing a new Bearsun suit.

Larios expects to complete his run in about 180 days and his causes are all military veterans, post-traumatic stress disorder, and mental health.