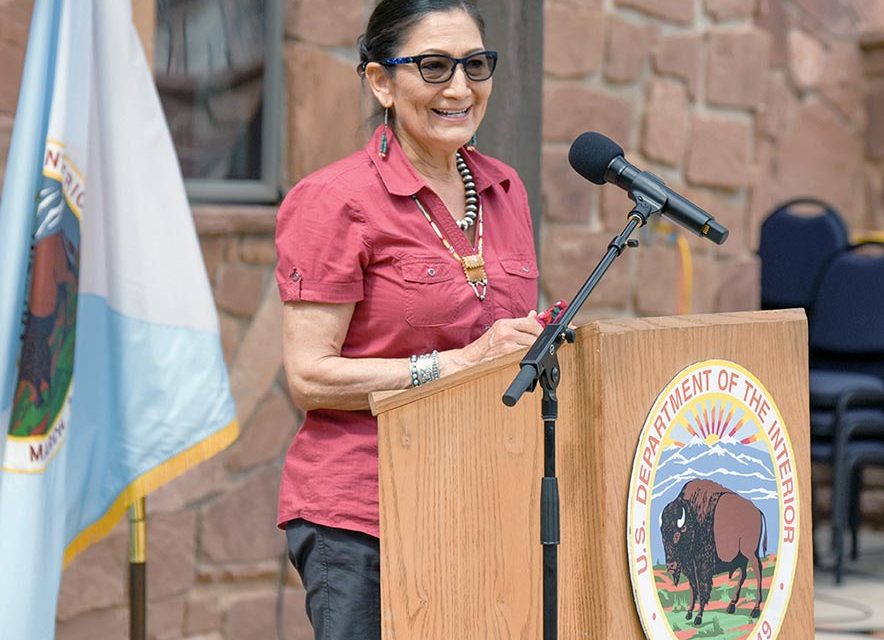 Special to the Times | Krista Allen
Interior Secretary Deb Haaland speaks at a press conference outside of Edge of the Cedars Park Museum in Blanding, Utah, on April 8. Haaland visited the Shash Jaa’ region as part of the Biden administration’s review of the monuments’ boundaries and management conditions.

The Interior secretary hiked to the Butler Wash anaasází ruins on April 9 after an early-morning meeting at Muley Point.

“I’m so happy to be back here in Utah. I’ve been here several times before and it’s just as beautiful as it has every time I’ve been here,” Haaland said. “I appreciate the opportunity to join the governor and the Sooléí delegation.

“The governor’s been an incredible host,” she said. “I’m so grateful for his company on the trails … and all the conversations we’ve had on this land.”

Haaland wrapped up her three-day trip after a number of field visits and meetings with elected officials, tribal leaders and “stakeholders” invested in the stewardship of Bears Ears and Grand Staircase-Escalante national monuments.

Haaland spent time in both Kane and San Juan counties in response to President Joe Biden’s executive order for a review of former President Donald Trump’s Dec. 4, 2017, unprecedented move – a reversal of protections put in place by his Democratic predecessors. The Trump administration at that point in time was pushing for fewer restrictions and more development on public lands.
Biden’s executive order instructs her to provide recommendations about monument management and boundary revisions.

“The purpose of my visit this time around is to really listen,” Haaland said. “To listen to the governor, to listen to the Utah delegation; listen to the tribal leaders, listen to the local folks and the stakeholders who care deeply about this land and who have lived here all their lives.”

Haaland said she made sure to listen to as many people as possible during her visit. Now she’s a step closer to completing a full report on the two national monuments. That report will be submitted shortly after her trip, according to Interior.

Haaland is expected to recommend that Biden restore the Bears Ears boundaries – and expanded to 1.9 million acres – established by former President Barack Obama at the end of his term in 2016.

“I know that the Biden administration is considering the boundaries and management conditions of Bears Ears (and Grand Staircase-Escalante) national monuments,” Haaland said. “And my message is really, very simple: I’m here to listen, I’m here to learn.”

Haaland said she knows decisions about public land are incredibly impactful not only to the people who live in the region today but also for future generations who can enjoy the area.

“So it’s important that the president gets this right,” Haaland said. “I spent time on the land. I’ve looked at pictographs, vistas that take your breath away. I’ve spoken with other folks who’ve said, ‘This is an extremely special place.’

“So it’s pretty clear that people everywhere have a feeling about this area and know that the cultural heritage of this area belongs to all Americans and it’s so important that we think of that for the future,” she said.

Haaland’s trip here is being watched closely by the many groups who have stakes in the management of the federal lands she oversees.

“I will take back what I learned to President Biden and he should have the benefit of all the perspective that I’m hearing from,” Haaland said. 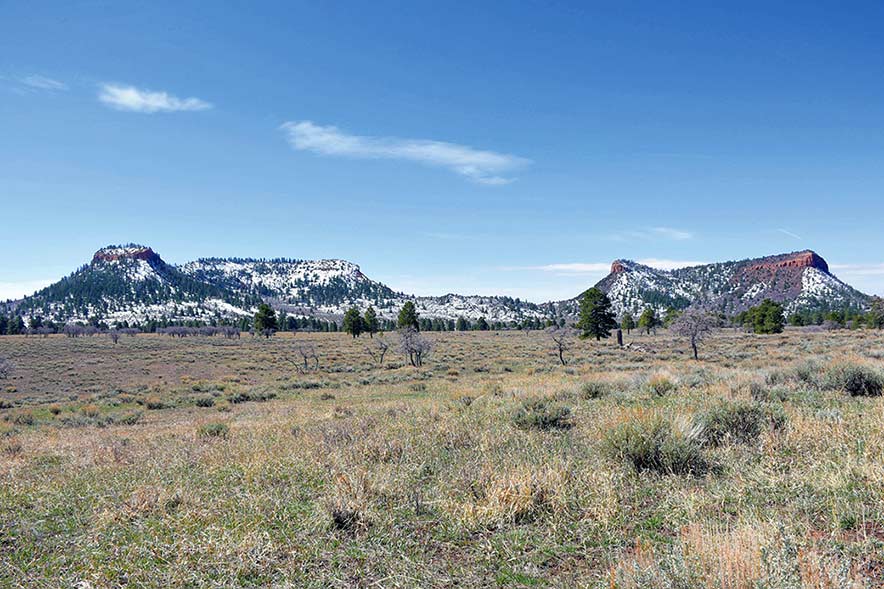 Special to the Times | Krista Allen
The Shash Jaa’ buttes are partly covered by snow in the Manti-La Sal National Forest on Thursday. Interior Secretary Deb Haaland two weeks ago visited the Shash Jaa’ region but wasn’t able to visit the buttes because of road conditions.

“The takeaway from meetings from the past 24 hours is that we want to try to take the divisiveness out of this as much as we possibly can,” said Cox, who praised Haaland for listening to the people and visiting Utah. “That’s probably impossible but there are better ways to do this.

“There are better ways to take these shared landscapes for generations to come and to honor the spirit of the people who have been here before, and the people who are here now,” he said.
“And recognize the complexities of these issues that are economical, spiritual – there are so many different issues that are interacting here. And really trying to get into the core of what matters.”

It’s what matters to tribes, to Utahans and to the residents of surrounding communities who depend on these lands for their lives and livelihoods, said Cox, who’s one of the top state leaders in opposition to the restoration of either national monument.

Sooléí leaders, including Cox and Romney, are calling on Biden to be “collaborative” on a long-term, legislative solution with Congress for the future of the monuments.

The Sooléí delegation argues that roughly two-thirds of Utah’s landscape belongs to the federal government, meaning that land management actions have often been done “to us rather than with us.”

“We share a sincere desire to find a collaborative, broadly supported solution to the political football of national monuments in Utah, specifically Grand Staircase-Escalante and Bears Ears national monuments,” reads a joint statement by the Utah congressional delegation.

“A review in name only with predetermined results,” the statement says, “which ultimately leads to a unilateral executive order enlarging the monuments’ boundaries, will not solve the root of the problem and will only deepen divisions in this country.”

Cox said “monument” is just a word but there are laws around monuments. He asks, what is it that we really want?

“This is the dichotomy because these places are so spiritual,” Cox said. “We heard these stories (during Haaland’s trip) about how we want to protect these lands. The minute we made it a monument; people started coming.

“The more people that come, the more degradation that happens to the land,” he said. “How do we protect the things that need protection but still be able to provide jobs for those that live in this area? And where are those intersections?”

“We all want pretty much the same thing right? We want to protect the land,” Haaland said. “We want to make sure that it’s there for generations to come.

“It’s my job to put together a report for the president of everyone we met with, everything we heard – what the competing interests are and ultimately, it’ll be (Biden’s) decision,” she said.

Even though Shash Jaa’ remains a divisive issue, the crowds are coming fueled by social media and the national spotlight.

“This started right around the millennium (with) a guy by the name of (former) Senator Bob Bennett,” said Davis Filfred, the board chair for Utah Diné Bikéyah.

Bennett’s goal was to make a decision about the longstanding public lands dispute that continues to be looted and vandalized.

Filfred said it’s been happening for a long time and hunters are still shooting at petroglyph walls.

“And I told (Haaland) that,” Filfred said. “There’s no police in this area. All this vast area is unprotected. We have Anasazi ruins and all these cattlemen that use this area, their cows (step) on these ruins and they collapse. And they trample all over this – even the pottery.

“We need protection,” he said. “Yes, there’s looting that is still going on.

“Just like today, if there was a tourist that came in, they’ll see a pottery,” he said. “They’ll pick it up and they’ll take it. That’s looting!

“Yes, it does, it’s still happening,” he said. “I don’t care what they call it, but to me, that’s called looting.”

Utah Rep. John Curtis, whose district includes Bears Ears, said if Biden uses an executive order to restore the monument the likelihood that it will be rescinded by a future president or taken up by the Supreme Court is extremely high.

Sooléí lawmakers say they can build a more durable solution through legislation that would allow for negotiations among competing interests.

Haaland said she doesn’t know what that legislation would look like, but she’ll continue to stay in touch and talk.

“That’s a terrible way to resolve these issues,” Curtis said. “Nobody wins.”

Haaland added, “I wish I could spend two weeks here. It’d be an amazing opportunity for me to really dig down. We had a limited time.”