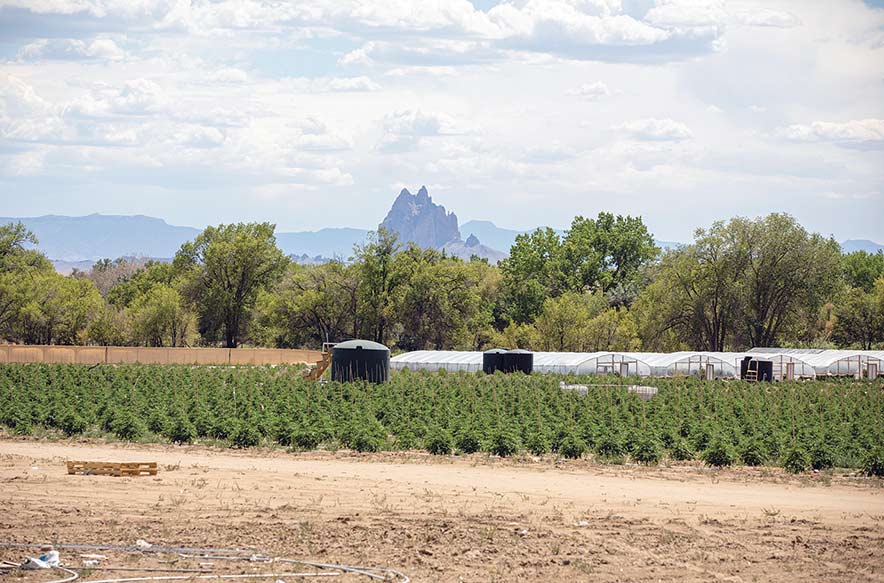 San Juan River Farm Board President Dineh Benally and his attorney, David Jordan, argued that the district court is not the proper entity to resolve agricultural disputes and the case brought against him by the Navajo Nation should be dismissed.

On June 11, the Navajo Nation’s special counsel, Charles W. Galbraith, of Kilpatrick Townsend & Stockton LLP, submitted a complaint with the Shiprock District Court to enjoin Benally from illegally cultivating, growing, possessing, transferring, selling, developing or propagating industrial hemp within the exterior border of the Navajo Nation, among other things.

On July 6, Jordan filed for dismissal and on the same day Galbraith filed a motion opposing this.

During Monday’s dismissal hearing, presided over by Judge Genevieve Woody, Jordan listed two reasons why Benally’s case should be dismissed: the two corporate entities, Navajo Gold and Native American Agricultural Company, named in the complaint do not exist; and disputes regarding agriculture should be handled by the farm board itself and appealed to the Office of Hearings and Appeals, according to the Navajo code.

Jordan continued, saying that 3 NNC, section 60(A) 5, gives the farm board the power to be mediators and resolve issues regarding land-use rights; fences; rights-of-way; land boundaries; weed and pest control; and other agriculture disputes within the Navajo Nation and unresolved matters should be taken up by the Office of Hearings and Appeals.

Making another argument that since the farm board took the position that it approves the cultivation of hemp, and it approved it for their president, Benally, and other farmers then the farm board is “a necessary party” for this case as well.

Jordan’s argument is nothing but a distraction from the real issue, said Galbraith.

He said Benally’s hemp farming has caused disharmony to the community of Shiprock, the Navajo Nation, and it is “clearly illegal under Navajo law.”

“The fact it is now a violation of civil regulatory law as opposed to the criminal drug violation, like it used to be, is the only reason this is a civil matter and not a criminal matter,” argued Galbraith. “This is not a political dispute. This is about the authority of the Navajo Nation Council to enact laws and govern the entire Nation.”

When it comes to Jordan denying the existence of Native American Agricultural Company is interesting, since this is the company that is listed on the farm board’s website that screens all potential farms and farmer applications wanting to learn how to grow hemp.

As for Navajo Gold, this company has its own website where currently it is asking for donations for COVID-19 relief. But it states that it is a premium cannabis company developed by Aqueous Sciences in association with the Native American Agricultural Company “based on the sovereign Navajo Nation.”

Whether or not these two companies exist or not in the eyes of the Navajo Nation doesn’t matter, because Native American Agricultural Company does exist to One World Ventures Inc., a legal hemp and cannabis industry, based out of Las Vegas.

Benally is also listed as the president of the NAAC, according to One World Ventures Inc., which appointed Benally onto its board of directors.
In a March 18, 2019, press release One World Ventures stated that Benally played a key role in the legalizing and promotion, propagation and implementation of hemp and cannabis on “Navajo Nation” land.

It also stated that Benally is also the formulator behind the American Indian Agriculture Regulatory Agency, which regulates and monitors the hemp and cannabis regulations for the Navajo Nation.

“To the knowledge of Dineh Benally, neither of those companies exist as corporate entities,” said Jordan. “I think it was sloppy work on part of the plaintiff to not actually check to see if that company existed before naming it as a party.”

Although it states in the World Ventures press release that Benally is part of a regulatory agency for hemp and cannabis on Navajo, the only people that can regulate this is Navajo Nation Council, and this is what Galbraith argued.

New Mexico State University is the only entity the Council had given permission to grow a 200 square-feet harvest of hemp, which recently grew to five acres, at the Navajo Agricultural Products Industry site.

Benally has planted up to 2.5 million hemp plants on 300 acres, according to Galbraith.

Resolution CO-75-18 states its enactment does not authorize the cultivation, growth, possession, propagation, or development of industrial hemp until the Navajo Nation creates a regulatory system for industrial hemp.

“Primary reason that such regulations are important because they are important to ensure the hemp that is grown is not actually marijuana,” said Gailbraith. “Please do not allow his political skills … to distract this court from the basic underlining fact issue.

“Unregulated industrial hemp is illegal on the Navajo Nation,” he said. “The Navajo hemp laws are clear. This is not a political dispute. This is a distraction.”