Navajo Times | Donovan Quintero Meskee Yatsayte from Gallup places signs on her car Jan. 22 before a human trafficking awareness walk begins. The walk concluded on the doorsteps of the Navajo Nation Council Chamber in Window Rock.

Navajo Times | Donovan Quintero
Meskee Yatsayte from Gallup places signs on her car Jan. 22 before a human trafficking awareness walk begins. The walk concluded on the doorsteps of the Navajo Nation Council Chamber in Window Rock.

By Jenni Monet
Special to the Times

A cold snap had arrived that morning on the Navajo Nation, but the chill didn’t deter Yatsayte. Dressed in a head-to-toe wooly Pendleton coat, she joined a dozen or so others to walk to the sandstone steps of the nearby Council Chamber about a mile away on Jan. 22.

There, the winter session of the Navajo Nation Council was set to begin; the morning’s demonstration was timely and intentional. Six months after a new law had been enacted to curb human trafficking on the reservation, little government action had since occurred.

“No one’s talking about it,” said Yatsayte referring to a growing list of the tribe’s disappeared.

A tribal citizen, she is also one of the founders behind Navajo Nation Missing Persons, a nonprofit organization that chronicles those who have mysteriously vanished. Like many advocacy efforts from Indian Country, NNMP thrives on Facebook.

“The number one comment that we get is, ‘Oh, my God, I thought they were found already,’” said Yatsayte. “A lot of the individuals have been forgotten about.”

Advocates across America declared the month of January “Human Trafficking Awareness Month,” a campaign that is in lockstep with tracking missing persons cases nationwide.

On the Navajo Nation, the situation is similar. The president’s office has begun routine meetings with Yatsayte and NNMP volunteers. The walk that took place in late January was one way that the groups are collaborating. So far, human trafficking is a crime that advocates say few people on the reservation know anything about.

Following the walk, Begaye and the tribe’s vice president, Jonathan Nez, signed a proclamation to encourage education and awareness of trafficking, a crime that the Department of Justice defines as the fraudulent or forced exploitation of a person for labor, involuntary servitude or commercial sex.

“We have predators that prey on our children and they know what to look for and who to look for,” said Begaye. “People are going after our children and we need to make sure that we bring this awareness to our schools, chapters and executive departments.”

For all the politicking, though, not even Begaye perhaps understands the scope of the tribe’s human trafficking problem. Data is drastically limited. Survivor stories are scant.

So far, putting a human face to a victim – what often encourages others to identify and sympathize – appears to be a stretch.

When Begaye signed into effect the Navajo Nation Law against Human Trafficking in August, sponsors of the bill say they relied on trafficking information stemming from Arizona. It’s there where the majority of the Navajo Nation’s tribal lands are situated, but also, where an extensive campaign to combat human trafficking has been led by Cindy McCain, wife of long-time U.S. Sen. John McCain, R-Ariz.

What is known about sex trafficking on and around the borderlands of the Navajo Nation is largely anecdotal, though – not statistical.

For instance, in September when Mrs. McCain testified before the Senate Committee on Indian Affairs, she recounted the day she said she spotted six girls “on display” for customers inside a tribal casino near Phoenix. 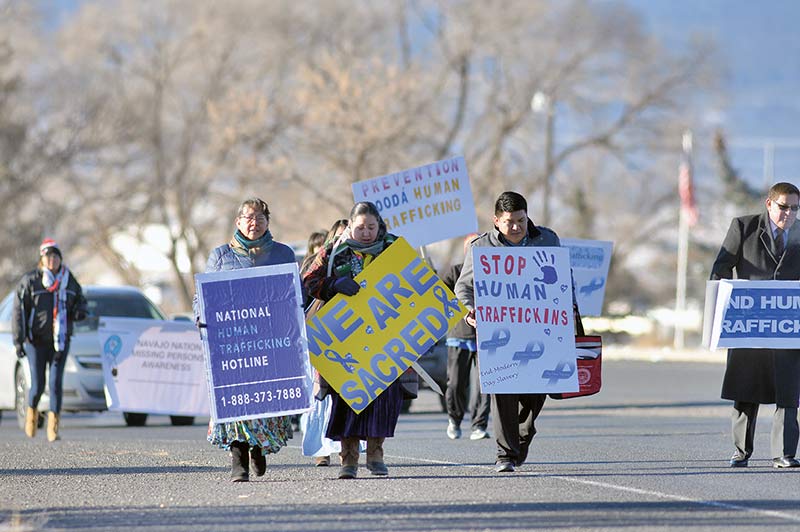 “Unsure what to do, security personnel allowed the girls to stay at the casino,” McCain told committee members, a story to emphasize her point about how Native Americans are largely overlooked as sex trafficking victims.

The exhaustive collection of studies conducted by Arizona State University’s Office of Sex Trafficking Intervention Research, data gathering that was funded in part by the McCain Institute for International Leadership, offers little in the way of understanding the impacts that the crime has on the Navajo Nation.

One study on homeless youth surveyed a small percentage of Native American teens living on the streets. But it is unclear from the data to what extent these Native youth were exposed to sex trafficking, and also with which tribal nation they may have been affiliated.

More research needs to be done.

In a press release following the day’s proclamation, the Navajo Nation president’s office quoted statistics from the National Center for Missing and Exploited Children.

“An estimated one out of six endangered runaways are likely child sex trafficking victims,” the press release read.

For now, the quoted data, at the very least, has shone a light on where the tribe’s intentions are centered – on the guarding and protection of its Navajo youth.