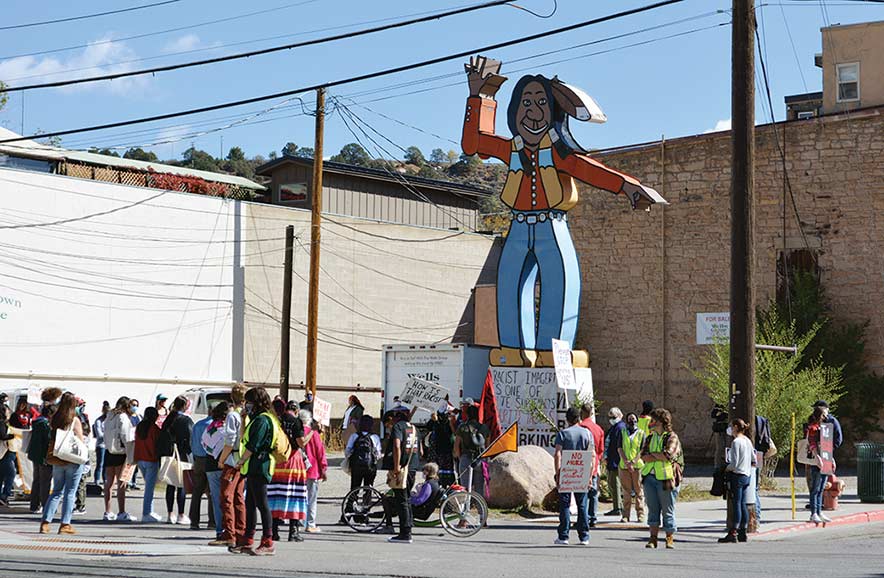 Navajo Times | Crystal Ashike
The Durango Indigenous Peoples Day march ended at To-Atin Gallery where a caricature of a Native American called “the chief” stands pointing to the To-Atin Gallery. It has been controversial throughout the years.

Hailey Big wanted to dress up for Indigenous Peoples Day at her school. Because it was closed, she asked her mother, Rhonda Adeky, to take her to the Day of Rage.

The marchers gathered at the Transit Center to pray and moved along U.S. Highway 550 before looping around to be heard on Main Avenue.

“As organizers we wanted to highlight Indigenous Peoples Day,” said Trennie Collin, a member of the Southern Ute Indian Tribe.

Collin wanted to bring awareness to the controversial sign owned by the Toh-Atin Gallery where the marched ended.

The 25-foot tall sign is a caricature of a Native man known as “the chief” by locals. It was a sign for the Chief Restaurant in the 1960s.

“The fact is it is problematic and harmful, and hurtful,” Trennie said. 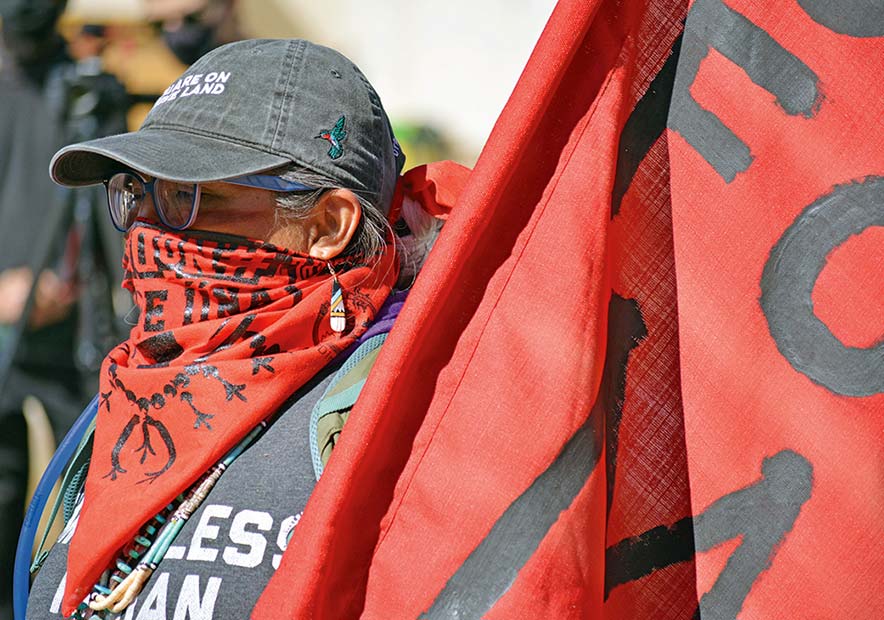 Navajo Times | Crystal Ashike
Lead marcher Stephanie, who lives in Ignacio, Colo., wanted her voice heard at the Durango Indigenous Peoples Day march. The march was in downtown Durango, Colo., and ended at the To-Atin Gallery on Sunday, Oct. 10.

For years, she advocated for the removal of the sign. A few months ago, a middle school student, Julia Miller, took a survey for a school project, and found it to be offensive to children.

She wrote a letter to the Durango Herald to inform the community about her results.

The march was a response to the Indigenous Peoples Day of Rage, or the Day of Rage, a protest started last year in Portland, Oregon, where statues were toppled and damaged in the city’s downtown.

The march in downtown Durango did not mimic any of the violence that happened in Oregon, instead it allowed people to voice their disagreement at the base of Toh-Atin Gallery’s sign.

“I came here today because we are done with white supremacy and white racism … and to put our voices out there,” said Stephanie, the lead marcher who did not want to disclose her last name.

A truck driver from Arizona observed the marchers from City Market’s employee parking lot and wondered why people were gathering under the sign. He did not see anything wrong with the sign, but was interested in the uproar.

The owner of Toh-Atin Gallery, Jackson Clark, was out of town when the protest happened, and was not available.

Hailey stood with her mom near the Toh-Atin sign after the march.

“I thought it was really cool that they are standing up for this, and trying to take it down,” Big posted on social media, “and I thought it would be a cool idea to support that.”