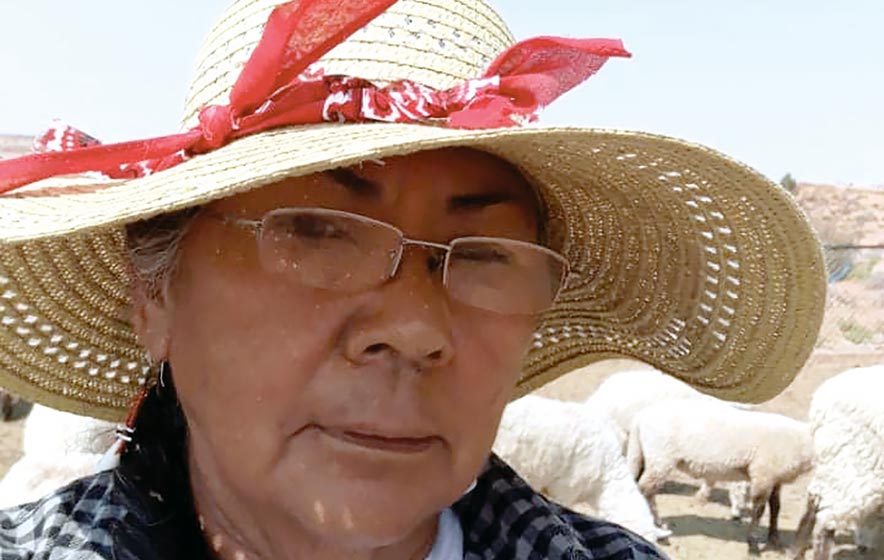 Courtesy photo | Harold Yazzie
Rancher and sheepherder Darlene Yazzie, 71, said because there has been no rain and no wind, windmills and vegetation have dried up, which means she has to buy hay for her livestock and haul water from Dennehotso, nine miles away from her home.

Many Mexican Water residents say they have been waiting on running water and/or electricity for a long time but the coronavirus pandemic, coupled with the drought and the government shutdown, have made their needs even more acute. 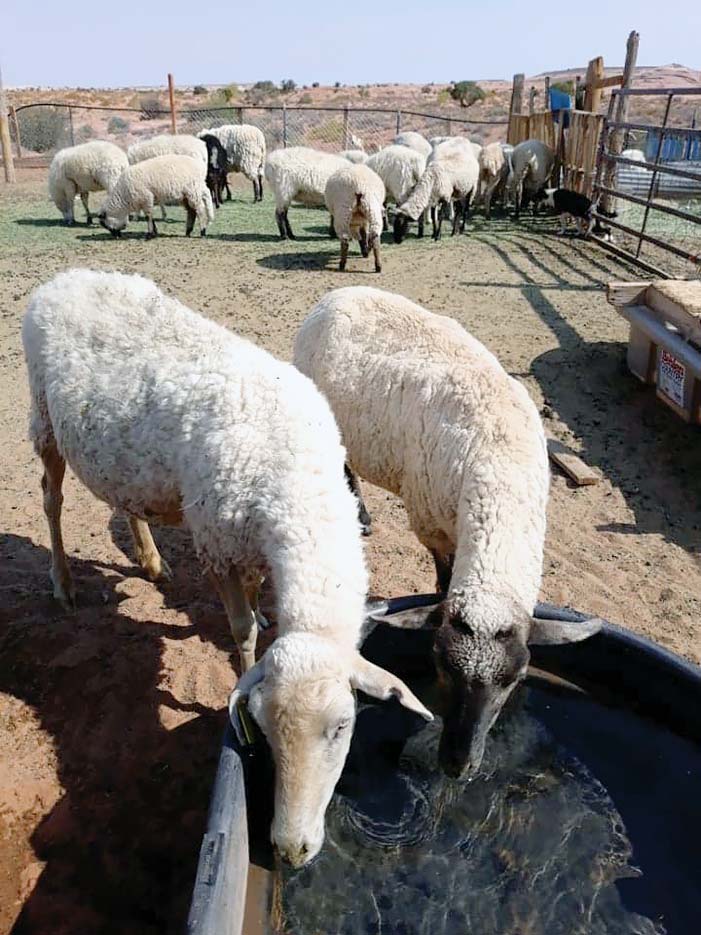 Chapter officials say the community is suffering deeply from the impact of COVID-19 and are disappointed in the leadership in Window Rock. “My concern is at the local grassroots level, people who live in hogans with no running water, no electricity,” said Chapter Vice President David John. “People out here are not getting any kind of services regarding COVID-19. Some of these elders and even younger people are out here without any kind of resources or assistance from the Navajo Nation.”

John said when the chapters were closed due to the state of emergency declaration, there was no plan for providing essential services or clear communication to chapter officials and staff, yet they feel an obligation to meet the needs of their community with little support.

The central government also did not provide any Personal Protective Equipment to the chapters, said John, failing to protect officials and staff who are on the front lines. Additionally, Mexican Water has just one Community Health Representative who is assigned to serve five chapters in the midst of the pandemic.

John said the recent newsletter from the president’s office, which was distributed through the Navajo Times, reminded him of a “dog and pony show.” “All they said in there is everything is good,” said John. “That is not accurate. They’re not addressing the issues that are happening down at the hogan level.” John said there are some water projects in his area that are construction ready but they’re “just sitting there.”

“Right now there’s a drought and there’s a shortage of water,” he said. Rancher and sheepherder Darlene Yazzie, 71, said because there has been no rain and no wind, windmills and vegetation have dried up, which means she has to buy hay for her livestock and haul water from Dennehotso, nine miles away from her home.

“Sometimes there’s a long wait,” she said. While living on a fixed income, she also buys cases of water for drinking, cooking and washing. “I’ve been living like this for years and years,” said Yazzie. John said the only real assistance the community received is from nonprofit organizations. The president’s office and the Navajo Health Command Operations Center don’t respond to requests for help, he said.

“I’ve left message after message, written letters,” he said. “They’re ignoring the chapters. Their staff is not even returning calls, which is really unprofessional. There’s zero customer service. It’s terrible how they operate.”

He said the administration has forgotten the people who elected them. “That’s what the chapters are saying,” he said. “We’re the one who put them in there and now they don’t even respond to our requests.”

John says their delegate, Charlaine Tso, has also not been communicating regularly with the chapter. “It’s really hard to reach her,” he said. Tso did not respond to requests for comment from this reporter.

Elder Juanita Frazier has lived in a home without running water her whole life. “When I was five years old, I carried water in homemade buckets from holes made to collect water seeping from the walls of washes or rock cliffs,” said Frazier. “That was 75 years ago.”

She said over the years her father and other residents requested help but it was never a priority. “The excuse was always, ‘No funding available,’” she said. Since that time, windmills popped up around the landscape with no guarantee that the water is safe for consumption.

“Now we haul water to our homes, filling containers to use for cooking, drinking and personal hygiene,” said Frazier. “Today, after 75 years, I still have to use buckets to carry water into the house. The only difference is the distance between my 55-gallon water barrel to my front door is a lot shorter.”

Frazier says she hopes the Nez administration will heed the chapter’s request for funds. Mexican Water recently submitted a proposal for direct allocation of $2.7 million through their chapter’s Navajo CARES fund expenditure plan, but they haven’t received any follow-up on that, said John.

This week President Jonathan Nez finally approved over $475 million in CARES Act appropriations, which includes funding for water projects ($130 million), power line projects ($44.2 million), solar projects ($35.1 million), and broadband internet ($53.2 milion). John wonders if any of those funds will trickle down to the chapter. “We’re always left out,” he said.

“I am very frustrated, just like everybody else,” said Maryboy. “I think everybody just pretty much stopped calling the Navajo Nation. There are so many restrictions and too much red tape. It’s very disappointing.”

Maryboy said the only thing that the Navajo Nation government has done during the pandemic is bring one round of food boxes from the president’s office.

“The sad thing about it is the vegetables were spoiled,” he said. Maryboy said it’s been outside organizations like Utah Diné Bikéyah that have been the only ones helping to bring donations.

He said one of the hardest things they’ve had to deal with is the aftermath when someone passes on, such as burial arrangements and finding someone to sanitize their home. “When folks pass away, nobody’s wanting to help,” he said. “There’s no equipment to dig the gravesite. It’s so overwhelming sometimes.” Maryboy says he’s worried about what will happen come winter. “A lot of our elders are still using firewood,” he said. “I’m wondering how are we going to get firewood to these folks.”

Maryboy said he doesn’t know what to think or who to turn to anymore. “That CARES money is going to be expired pretty soon and here our leaders are mucking around with it still,” said Maryboy. “The way things are going with our Nation’s leaders, they’re too busy squabbling over everything instead of helping the people.”

Maryboy said it’s going to take some time for the Nation to disburse the money. “The process is so slow,” he said. “Even a stipend for employee’s checks takes over a month to get paid, so how are they going to be able to disperse $600 million? That expiration date is around the corner.”

To make matters worse, Maryboy said that many residents who live in remote areas still don’t understand what’s going on. “They don’t realize our chapters are closed down and they’re over there looking for certain things,” he said. ‘

“We’re in very bad shape,” said veteran Howard Yazzie, from Garnet Ridge, which straddles Mexican Water and Dennehotso, where he says about 60 people live without water, many of whom are elders and/or health compromised individuals. “We all need water,” said Yazzie. “We are really in a bind. We really need help.”

Yazzie says residents do their best to haul water for themselves and their livestock. “It is very difficult, especially during the COVID-19 pandemic,” he said. Yazzie said they even have a water tank installed up on Garnet Ridge but the waterline isn’t connected from Dennehotso yet, which is four miles away. He said the health department from Kayenta surveyed the area, and the project is construction ready. “The IHS said they were just waiting on money,” he said.

Yazzie said they are looking forward to help from the Navajo Nation. “We heard about the CARES Act, but we have no word from any chapter official or Council delegate or anybody from Window Rock about an assessment of how we are living here,” he said. “I only wish they would see us and help us. It’s very hard for us.”

Yazzie said nobody from the Navajo Nation has come to Garnet Ridge to help during the pandemic. The only aid they’ve received was one donation of bottled water from Apache County, but that was it. He said with the chapter shut down, no one answers the phone. “The chapter communication system is so bad out here,” he said.

They also don’t have internet, he said, and he’s very concerned about kids who are supposed to be starting school. Yazzie said there are only dirt roads where they live and they are really worried about winter. Delegate Nathanial Brown said he was familiar with the needs of residents in Dennehotso, including the Garnet Ridge area, and has been working to try to expedite water and power line projects. “It’s really rough out there,” he said.

Brown said the “Dennehotso East project” to provide water for 60 homes has already been funded and the groundwork has been done, but the pandemic has slowed things down even more than usual. He said funding was approved in 2016, but the shortage of engineers and the amount of steps and red tape that each project has to go through on Navajo make things very difficult. Brown said even the Navajo Tribal Utility Authority’s “Light up Navajo” projects have been delayed because of the Nation’s COVID-19 emergency order, which prohibits visitors on the Nation, including off-reservation workers, he said.

The reclamation of Kayenta Mine has also stopped because of the order, he added. To compound the problems, several Office of Environmental Health and NTUA employees tested positive for COVID-19, he said, which contributed to the slowdown in operations.

Mexican Water resident Melissa Todecheene said her family lives without running water or power, and she’s been asking for help for years, she said. “All we hear is ‘no funding, no money,’” said Todecheene. “I don’t know how they’re organizing their priorities.”

She said they have have received some COVID-19 relief donations from outside organizations and one box from the president’s office. “All they gave us was a bandana, a pair of shoes that don’t fit, one corn, one squash, one cantalope — that was basically it,” she said. Todecheene said she would have appreciated flour, potatoes, canned goods and water. “I wish they would help out more with what our families need,” she said.

John says registration at the Mexican Water Chapter is declining because people have lost hope in the system, and many young people are moving off-reservation. “They say, ‘What’s the use? We’re not getting any assistance from the Navajo Nation anyway,’” said John.