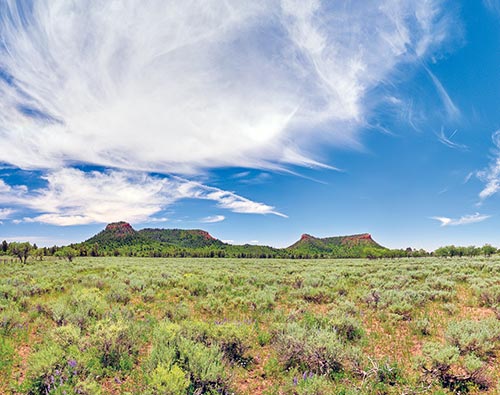 President Barack Obama has designated the Bears Ears buttes in southern Utah as a national monument with 1.35 million acres of protected Federal Land.

In a White House conference call Wednesday afternoon, Chrissy Goldfuss, managing director at the White House Council on Environmental Quality, and Navajo President Russell Begaye confirmed President Obama would designate Bears Ears as a National Monument under the Antiquities Act of 1906 at 5 p.m. He also declared the Bears Ears Commission, with representation from local tribes, to help manage the new monument.

“Today is a great day for the Navajo Nation, tribal and elected officials (who are) part of the Bears Ears Inter-tribal Coalition,” said Begaye cheerfully.

The Inter-tribal coalition is comprised of the tribes of Navajo, Hopi, Ute Mountain Ute, Pueblo of Zuni and the Ute Indian Tribe.

Begaye added Bears Ears National Monument will serve as a cultural and recreational site for all tribes who use the land and under the resolution from President Obama, all local tribes will have access to the land for gathering plants and saying prayers.

The legislation was passed after the U.S. Department of the Interior and the Obama Administration reviewed hundreds of applications for destinations of national monuments. The narrowed them down to two locations: Bears Ears and Gold Butte, Nevada, according to Goldfuss.

Begaye said this was a great day for all Diné, as the area holds rich history and is a sacred area for many Diné, whose ancestors once lived in the area and hid there from the U.S. Calvary during the Long Walk.

“Chief Manuelito was born here and it holds many history for our people,” said Begaye.

Begaye acknowledged the Bear Ears Inter-tribal Coalition for its tireless effort to protect the area.

The five tribes will also make up the Bears Ears Commission, with each tribe designating a representative to make decisions to best implement the protection and governing of the Bears Ears National Monument.

“Having a seat at the table is important, to make choices, work hand-in-hand and to have a voice,” said Begaye, adding the commission will work closely with the Department of Interior and White House.

“This is monumental, has never been done before, a coalition for a National Monument,” Begaye added.

Goldfuss said the incoming Presidential administration will not be able to dissolve the legislation to designate Bears Ears a national monument.

Under the Antiquities Act, a President can create a national monument, but not destroy it. Only by Congress can the resolution be overturned, but no such act has ever been done according to Goldfuss.

“He is the leader for the Utah area of the reservation and strongly represents his area,” said Begaye of Filfred, adding he was a driving force is getting support for the coalition.

Although the Inter-tribal Coalition originally proposed 1.9 million acres of land, after reviews from the Department of Interior and local governments, 1.2 was proposed, but all agreed on 1.35 million to be sufficient for all tribes.

Since the Bears Ears National Monument is in place, Begaye would like to see other sacred sites designated, especially Dibé Nitsaa (Hesperus Peak), as it has a lot of history and is sacred to the Diné.

“It’s our Place of Emergence and we need to protect more sacred sites,” said Begaye.