Due to virus, fans banned from N.M. state tourney games 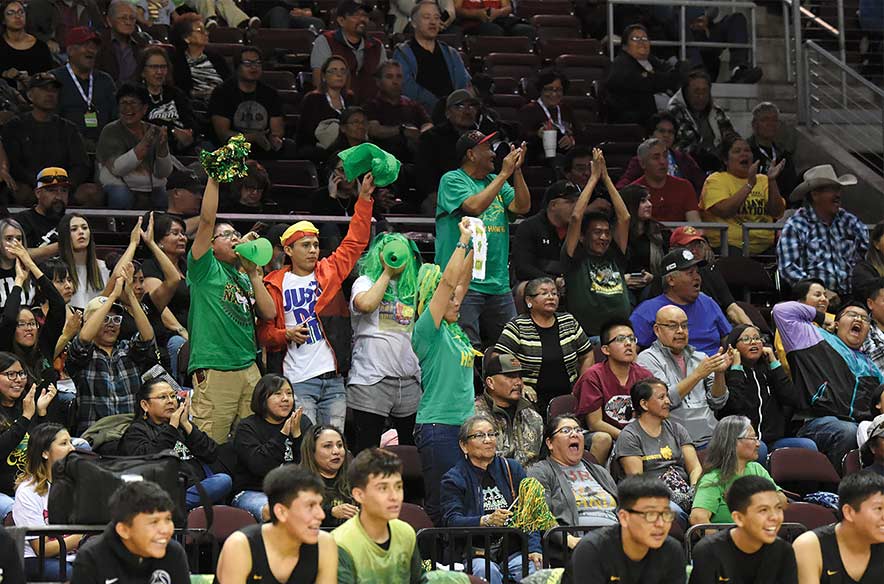 In light of the confirmed cases of the novel coronavirus in three New Mexico counties, the New Mexico Activities Association made the decision to ban fans for the remainder of the state basketball tournament late Wednesday night.

“Per the guidance of Governor Michelle Lujan Grisham and recommendations from both the departments of Health and Public Education, the 2020 NMAA state basketball championships will move forwards without fans,” the NMAA stated in a news release.

The NMAA stated that all of the games would stay on schedule for Thursday, Friday and Saturday at both the Santa Ana Star Center and Dreamstyle Arena sites.

“Only team members, officials and essential facility and tournament workers will be allowed in the building,” the release stated. “Members of the media will not be allowed entrance to either facility.”

The NMAA said the semifinals and finals game can be viewed online via the NFHS Network (www.nfhsnetwork.com) for a subscription cost of $10.99.

A number of area coaches said it was very unfortunate that the NMAA was forced to make this decision.

“This is a very big event for the state and a lot of people were looking forward to it,” said Kirtland Central girls’ basketball coach Devon Manning, whose team was scheduled to face Portales at 11:30 a.m. on Thursday at the Pit. “It’s just unfortunate this has to happen but sometimes it’s better to be overcautious than under-cautious.”

Piedra Vista girls’ coach Joe Reed felt the NMAA made the right decision to protect the well-being of the student-athletes.

“This is an unfortunate circumstance but we have to keep our student-athletes healthy,” he said.

Newcomb boys coach Dominique Richardson said he respected the decision made by the NMAA.

“It’s all in the name of safety and health for everybody in the state,” Richardson said. “It was hard decision for them to make but I understand why they had to do it.”

With the state tournament winding down, Richardson said he “felt real bad” for all the seniors who were still playing.

“Knowing that this is literally their last time to play they won’t be able to play in front of their parents,” he said. “It’s very unfortunate but at the end of the day the NMAA is focusing on what’s best for the safety of everybody.”

Gallup coach Joshua Dunlap said his kids are going to miss the experience of playing in front of a large crowd when they take on Albuquerque Highland today at 6:30 p.m. at the Pit.

“I’ve been showing them videos of when I played in a state championship game with 14,000 people watching,” he said. “Now we’re going to be playing in the Pit with nobody in it. Their experience it’s not going to be the same.”

With a huge following, the Gallup coach said it’s going to be hard to replace their sixth man.

“That’s one of our biggest advantages,” he said. “We were expecting to have ten thousand people (on Thursday). I even had coach (Justin) Woody from Highland texting me that they have been practicing with music blaring all week because they were getting ready for it.

“It’s going to be a little setback but we’re going to have to create our own energy,” he said.

Manning was also counting on their fan base to give them a little push as KC is seeking its 20th state title.

“It’s going to be weird not having them but we still have to go out there and play basketball,” he said. “Nothing is going to change between those sidelines to the baselines.

“We still have to go out there and shoot the basket and play defense,” he added. “We just have to create our own energy in an environment that’s unprecedented.”

Fans who purchased advance tickets through the University of New Mexico for Thursday through Saturday are asked to contact the Lobo ticket office on Monday, March 16.