The 13-mile BIA dirt road that runs between Low Mountain and Polacca in Arizona crosses federal and tribal jurisdictions and is washed out in several sections due to heavy rain and flooding.

Large shelves and deep crevices have emerged in the road making it impassable for most vehicles.

Begay said about 2 to 3 miles of the road goes through Navajo Partitioned Land and the rest goes through Hopi land.

“The majority of the road is under Hopi jurisdiction, but it is used by Navajos every day too,” he said. “There’s got to be a solution.

“We have to address this,” he said. “Why aren’t we helping members of both tribes who travel through this road, especially our kids?” 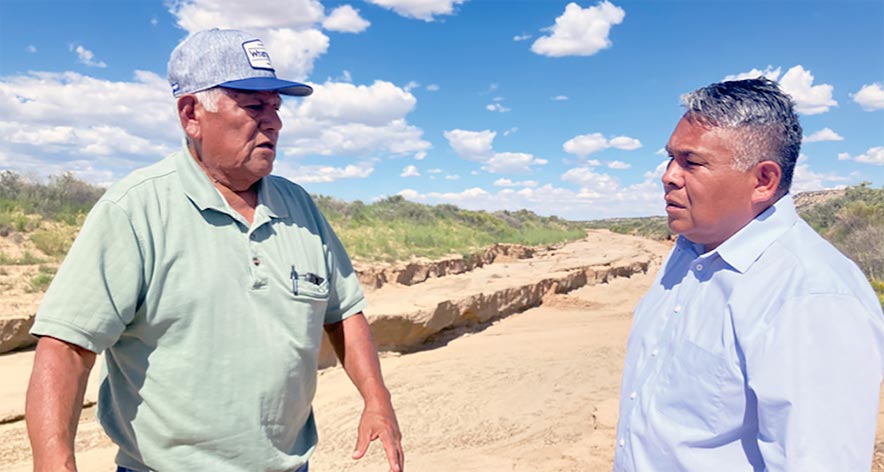 Begay, who has been advocating for H60 to be paved for many years, said now the situation has risen to the level of a crisis for the rural artery that many people depend on for transportation.

Begay and Sidney both expressed concern over school buses, first responders and emergency vehicles that are unable to serve residents from Low Mountain and Polacca due to the washed-out sections of the road.

“There’s no way they can go through,” said Begay. “They have to go all the way around through Burnside.”

Begay said that detour adds another hour to what is normally about a one-half hour trip, including for school buses that transport both Hopi and Navajo students.
Additionally, local residents and unknowing travelers are at risk for getting their vehicles stuck somewhere on the road, which is a serious public safety issue.

As shared in an Aug. 30 speakers’ office press release, Teller, Begay and Sidney recorded a video to send to U.S. Secretary of Transportation Pete Buttigieg and congressional leaders urging them to visit H60 and take immediate action to repair the the road and move toward paving the 13-mile stretch.

“I am pleading to Secretary Buttigieg on behalf of the community, children, and elders who rely on H60 for both daily and emergency services,” stated Begay.

“This issue is shared between the Navajo Nation and the Hopi Tribe, so I am asking for your consideration to act on behalf of your constituents to have this road paved.”
Begay said with all of the money that is now available for road infrastructure projects, there has to be a way to fix and improve the road.

“Right now, the short term is let’s make it passable again and in the long term how do we get funding to get it paved,” he said. “My biggest plea is to the federal government to help these two tribes.”

Both Begay and Sidney also discussed how both tribes have been stuck in the crippling bureaucracy of overlapping state, tribal and federal jurisdictions, policies and processes, which impede progress in resolving priorities like the H60 situation.

“In the past, both tribal governments were able to effectively work together on different road projects, however, with the change in politics over time, we are finding ourselves needing help from the federal government,” said Sidney.

“However, I am willing to put as much effort and resources needed to see this road be paved before I retire from politics,” he said.

Begay said on behalf of their communities, he and Sidney are also working cooperatively to appeal Arizona’s leadership, including U.S. senators Mark Kelly and Kyrsten Sinema, Rep. Tom O’Halleran and the BIA for assistance.

To this date, no one has responded.

“Both the Hopi Tribe and Navajo Nation need support on a congressional level due to the many jurisdictions that are within this single road,” said Begay.

Begay has also reached out to surrounding counties, the state, and both tribes’ transportation departments asking for a joint effort to repair and improve the road.

“As of today, not even one of them has responded,” he said. “Nothing. Not even a plan for how to make it passable.”

Navajo Division of Transportation Director Garrett Silversmith did not respond to a request for information from Navajo Times about what his office is doing to fix H60.

On Aug. 4, the Navajo Nation Commission on Emergency Management declared a state of emergency due to increased flooding and washouts caused by monsoon rains, which was intended to bring in additional relief resources and aid to impacted communities.

In the meantime, Begay said that he is grateful to Sidney, a former Hopi chairman, for his support.

“He’s stepping up as being the lead person,” he said. “He’s on board with me. He really wants this road to be paved as well.”

According to the speaker’s office, with the help from Teller, Begay and Sidney said they will continue their efforts to lobby for help from all parties involved.

Teller did not respond to a request for comment from Navajo Times.