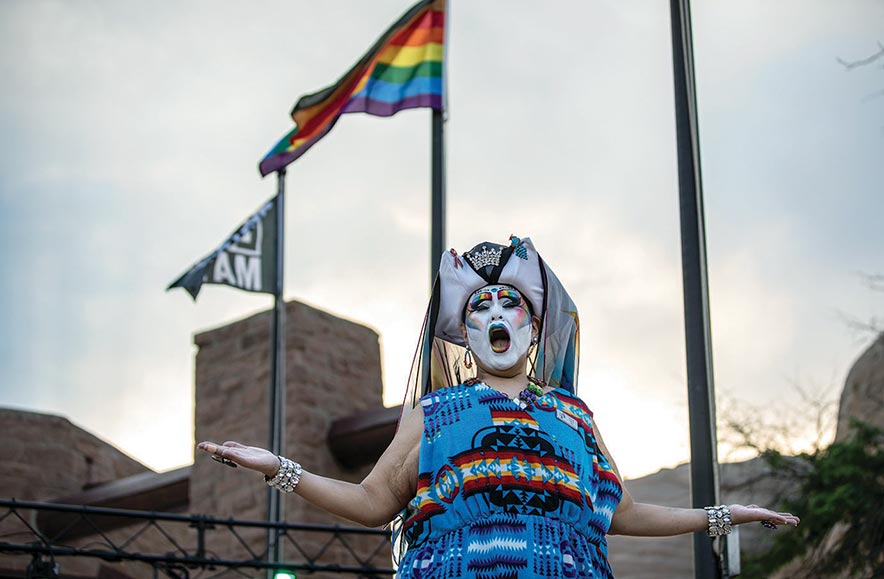 Recent Shiprock High School graduate Devon Norberto said he plans to pursue political science in hopes that one day he can go into government and advocate for the LGBTQ2S+.

On Saturday, in front of the Council Chamber, Norberto was one of two recipients of Navajo Nation’s Pride Nááts’íílid Rainbow Youth Scholarship. This award was one of the few events during the annual week-long Pride celebration mostly held live because of the pandemic.

But organizers had the Pride parade starting from the Navajo Nation Museum, ending at the Council Chamber where they held their closing ceremony.

“My main goal is to go into government,” said Norberto, who will be attending University of New Mexico this fall. “I want to advocate for our Navajo people, as well as the LGBTQI community.”

Norberto said the advocacy to have Navajo Nation recognize gay marriage is one area he looks to address. However, this he said is a discriminatory law that needs to be changed.

He also said federal-level discriminatory laws are passed against the LGBTQIA + community. Whether it be Navajo Nation or the United States, he plans to make an impact of change.

“We don’t have equal marriage here on the reservation,” Norberto said. “That’s something I feel is very discriminatory against us.

“In the United States, there are different bills being introduced in Congress that are discriminating against the LGBTQ community and I want to help change that and be more progressive without policies that are placed upon our people.”

According to the Freedom for All Americans website, there are no laws protecting people from discrimination based on sexual orientation or gender identity in employment, housing, and public accommodation in 27 states, including Arizona.

Speaker Seth Damon signed a resolution to proclaim the third week in June of each year as Diné Pride Week in the Navajo Nation back in 2020. In addition, he signed a second proclamation reaffirming this, which was the kick-off to this year’s Pride event.

So far, there has been no legislation to repeal the 2005 Diné Marriage Act, which suggests “marriage between persons of the same sex is void and prohibited.” But legislation – the Navajo Nation Equality Act – is in the works to address the LGBTQ+2S community.

“That’s to protect our LGBTQ relatives on the Navajo Nation,” Delegate Nate Brown said. “Imagine that day as us gay couples to have the right to adopt our children to help raise, to have medical benefits. We are excited … I know there is going to be resistance. I’m going to ask all of you to show up that day to support this legislation.”

Andy Nez, the cofounder of Navajo Nation Pride, said, “We shouldn’t have to invite tribal members to be a part of this conversation. We exist. So they should be here.”

Nez said he envisioned for years what the response would be if they started a narrative on Diné identity “around queer, gay, lesbian, transsexual,” which led to the beginning of Navajo Nation Pride.

The humble beginnings started with Nez handing out flyers four years before the event. The first event was held at K’e Info Shop at the Chihootsoi Flea Market. This is where he asked people to speak. One of the speakers was Alray Nelson, another cofounder of Navajo Nation Pride and who has grown it to what it is today, said Nez.

“A lot of the work I do now is outside of the organization. However, I still maintain the vision I saw several years ago,” Nez said. “We are equal with one another.”

Nelson has been at the forefront of bringing awareness to Navajo Nation Pride, the LGBTQ+2S community, and the need to repeal the 2005 Diné Marriage Act. He said this year’s Pride parade and events are symbolic because of the challenging year Navajo Nation has had with the pandemic.

“Our community dealt with a lot this past year with the pandemic,” Nelson said. “So the question is how do we create a community gathering again that everyone feels safe, protected and able to celebrate Pride month?”

The week of Pride was mostly virtually, but the parade and the iconic closing ceremony were in-person and held in front of the Council Chamber.

The admission was $5 and 120 seats were sold out in two days. The proceeds will go into the scholarship fund, just like Norberto and Monument Valley High School graduate Earlson Manson received.

“We had to adapt over the year and make everything virtual,” Nelson said. “We were really on a journey as an organization to do our programming and outreach, to reach that one Navajo gay kid, that one trans girl in the middle of Navajo, and to actually bring an event where they actually feel safe and be who they are.

“The pandemic hit and we lost a lot of relatives who identify as Diné and LGBTQ, this is our journey to stand back up and say we are going to be strong.”