NEPA may be able to cite hemp production 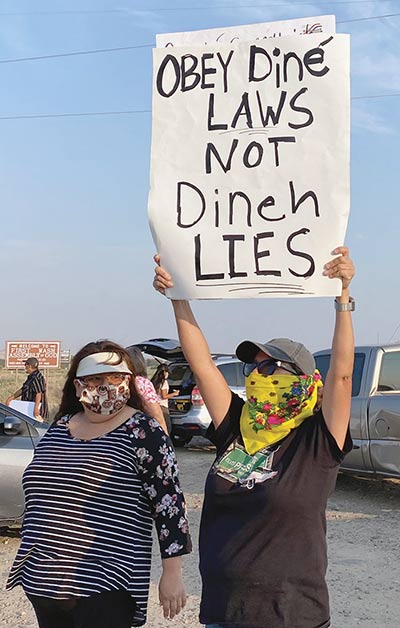 Navajo Times | Arlyssa Becenti
Residents hold an early morning protest at the turnoff to Mesa Farm Road in Shiprock. The protesters wanted to get the message out to the non-Navajo hemp farm workers they are unwelcome.

Oliver Whaley, director of the Navajo Environmental Protection Agency, believes Clean Water Act violations committed by Dineh Benally and his hemp greenhouse production are enough for his office to stop operations, but there needs to be coordination.

When NEPA received reports from residents that Benally’s hemp workers were discharging sewage into the San Juan River, NEPA began looking into it. Although NEPA’s Water Quality department did not find sewage in the river, they found a list of other concerning issues regarding the mobile homes workers have moved onto farms and other parts of the land, which goes against the home-site lease process. NEPA also found violations regarding the hemp greenhouses.

“We found they installed septic tanks without any regard to our domestic wastewater regulations,” said Whaley, a clear violation of the Clean Water Act. “They didn’t get any permits or anything like that. It didn’t appear they were using them to hold sewage but for shower, hand-washing water. But it still has to be put in place properly and still has to be pumped out and disposed of properly.”

Then there are the generators running fans in the greenhouses, which can be found in Shiprock, Gadiahi, Hogback, and other communities throughout the Navajo Nation.

Benally has planted up to 2.5 million hemp plants on 300 acres as of early August, according to Charlie Galbraith, special counsel for the Navajo Nation, during an Aug. 10 hearing. By now this may have increased. “They’ve got a number of generators running the fans, air vent systems in the greenhouses,” said Whaley. “That’s a question of air quality. There are thresholds that you have to meet in terms of pollutants you release and whether you need a permit.

“In this case,” he said, “the greenhouses are big enough, and there’s enough of them it may need minor source point permit to operate those.” There is also the matter of large gas storage tanks to feed the generators.

Whether the aboveground storage tanks adhere to regulation depends on their size and capacity. Last week, these issues and more were brought to the attention of President Jonathan Nez and Attorney General Doreen McPaul, as well as others in the executive branch, in hopes some sort of inter-agency coordination could take place to end the hemp production.

“We have some administrative authority and can take some action, but any action we take still has to be coordinated in some strategic fashion,” said Whaley. For the most part, any coordination Whaley was hoping for wasn’t determined and not much came from this meeting.

But due to Benally’s blatant violation of the Clean Water Act and not complying with other rules and regulations set forth by NEPA, Whaley said his office can demand compliance and if that doesn’t happen they can terminate operations. “I think we have enough information that they violated the act, and there is potential environmental impacts so that we can take action,” said Whaley. “On my end I can issue and serve an order requiring compliance and even emergency orders. We can do that now … but when it comes to enforcing those order it needs to go through Navajo DOJ.”

The Navajo Nation, its leaders, and its courts are not moving fast enough to put a stop to the crops, which has aggravated communities that are impacted directly and have had to deal with the plants’ strong smell as well as bright lights and heavy vehicle traffic for the entire spring and summer, when Benally ramped up production.

What faith the community had in leadership has dwindled to nearly nothing and on Monday, Shiprock residents held a second protest on the Mesa Road that leads to Benally’s home and a few of his hemp operations. As non-Navajo workers drove by, the group screamed to them, “Go home!” while waving signs.

“I don’t know what the Navajo Nation is going to do,” said protester and Shiprock resident Bea Redfeather-Benally. “I feel like they’re useless. I’m really disappointed with their justice system. “I’m angry because my family’s safety is on the line,” she said. “Is it going to take someone to die or get injured for them to wake up and do something? If the tribe and DOJ cant handle this, maybe they should turn it over to the state. They can’t handle their own laws.”

She also claimed the workers can be found at City Market in Shiprock looking at young women and taking pictures of them. Bissonette said she worries about the “man camps” that are being built by these workers. “We got two man camps going on north of me,” she said. “I’m concerned of our children and for our safety. We are tired of this. Our delegates, our President Nez, they need to hear us. “We put them in those positions so they can stand for us,” she said.

“They’re supposed to keep us safe. We want them to step down … the councilmen, the farm board members all to step down. It’s time Shiprock gets a new face.”

Navajo Nation Police and their chief, Phillip Francisco, were also at the protest and at one point a vehicle of non-Navajo workers stopped in the middle of the road after protesters waved their signs at them. Francisco told the driver to pull to the side and after checking the workers the chief said they didn’t have picture identification and did not understand much English. “We are gathering up their names and sending it to the chief prosecutor to have them excluded,” said Francisco. “They’re trespassing on the Navajo Nation.”

Redawn George, another resident who has been vocal about the hemp production, said she texted Vice President Myron Lizer about the protest and said the community would begin to start taking matters into their own hands. When she saw Navajo Nation Police there, she said she wasn’t too sure if they were there to keep the peace or to protect Benally’s workers.

“I let the VP know we were going to take things into our own hands based on no enforcement from local law enforcement,” said George, who said reports given to police officers usually aren’t addressed. “We are tired of waiting. All these officials, elected officials, law enforcement – it’s money that is the bottom line.” Francisco said calls made to dispatch have to be prioritized because of low manpower. Communities have been calling officers and reporting on speeding and curfew and lockdown violations.

“Sometimes we can only respond to major calls like domestic violence,” Francisco said. “Violent crimes are a priority. So calls like speeding are put at the bottom, which isn’t fair, but it’s the reality of us not having enough people.” Whaley said Francisco informed him he’d provide officers should any NEPA officials go to Benally’s hemp farms for any inspections, which Whaley said may need to happen.

For now Whaley is waiting on feedback from U.S. EPA in terms of how they can assist NEPA, since a lot of what is happening falls under federal purview, and if that’s the case this gives NEPA teeth to move forward, rather than waiting for Navajo Nation leadership to act.

“To my understanding their final harvest is supposed to be the end of September or early October,” said George, who is one of many disappointed in Shiprock District Court Judge Genevieve Woody’s lack of action during an Aug. 10 hearing on a civil complaint filed by the Navajo Nation against Benally.

Woody had delayed her ruling pending additional briefs by both sides, which Benally’s opponents argue will give him time to harvest his crop and pull up stakes. “They’ll pull all of them (hemp plants) out and then they’ll leave all these structures, and these people will get their permits and home-site leases taken away,” she said. “Those things are going to happen.”