Despite the parched weather and the ever-high temperatures, the summer season is fading away, and along with it, the cross-country season.

The first races would have been completed by now, but with the coronavirus pandemic still gripping the world, most school sporting events on the Navajo Nation have been canceled.

For athletes from St. Michael Indian School and Page High School, this comes as a big blow; both their teams have had a victorious streak for consecutive years. Page’s cross-country boys have held the state champion title for six years, while St. Michael’s cross-country girls held the title for four years. Both teams were determined to defend their state titles for the 2020 season, but the coronavirus changed that. 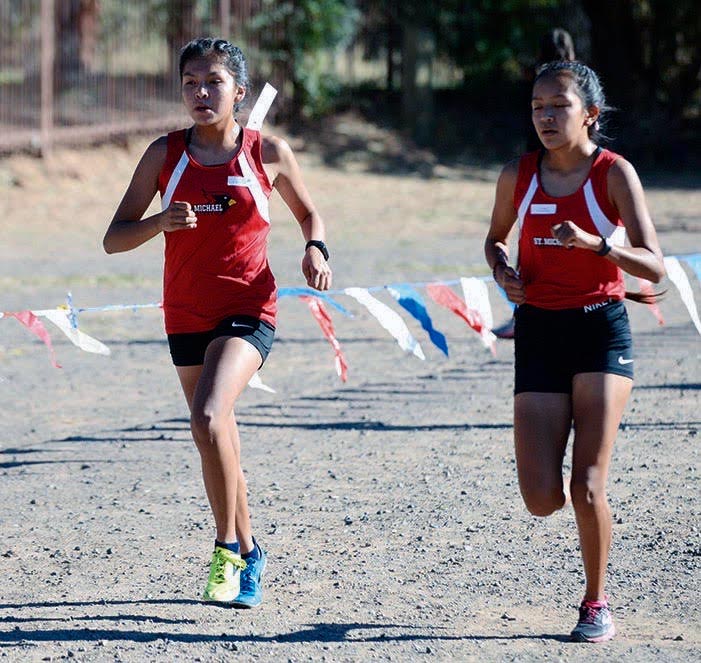 File photo
St. Michael’s Chiara Holgate, left, and Amber Woody run side by side at last year’s Curtis Williams Invitational at Red Rock Park. The Lady Cardinals captured the Arizona Division IV state title with a bevy of underclassmen. Due to the cancellation of fall sports St. Michael will forgo the cross-country season.

Carl Adams, athletic director at St. Michael, says their girl’s cross-country team is still working to stay fit on their own. The team follows a training routine taught to them by coach Kelly Bia, who helped them achieve consecutive championships. The athletes hope to be ready to defend their title when the time comes.

“We’re trying to think of new ways [to train],” Adams said. “I think this whole COVID-19 pandemic really is making every athlete, athletic director, and coach think outside the box with what they are going to do in regards to their athletes staying fit, keeping up to date and are ready if we ever could salvage a cross country season.”

Meanwhile, at Page, the reigning six-time boys cross-country champions are doing their best to stay fit, according to cross-country coach Theo Martin.

Martin describes the team as a close-knit group of friends whose bond has helped them win consecutive championships. Training on their own is challenging, despite Martin sending bi-weekly training instructions to them in an attempt to keep them fit.

Usually, Martin would have his team train at a running camp during the summer, but the virus made that impossible.

“Our main thing for training was the summer camp,” Theo said. “But we were unable to continue for the first time in 30 years. But that’s what we have to do to stay safe.”

Martin didn’t go into detail, but he said that members of the team have been personally affected by the virus and have lost loved ones.

Still, the thirst for the run is there.

Trent Holiday, who came in third at state last year, had reported to Martin that he’s been running six to eight miles a day, depending on how he feels.

Even though safety is a priority, both Adams and Martin, are concerned about the pandemic limiting opportunities for student-athletes.

Martin pointed out how other schools in Arizona, like Flagstaff, still have their cross-country team meetings and are training together. He fears this may put the Sand Devils at a disadvantage as they’re currently training on their own, missing the camaraderie of the team sport. With these different advantages, will there even be a 2021 champion?

“Too early to call. It’s a tough call,” Adams said when asked if there will be a 2021 championship meet. Since there are schools in Arizona that still have their racing on schedule while others are canceled, it would be unfair for them to claim the state title if not everyone is participating. “If we’re not participating in it, then it’s not a state championship,” he said.

However, what is weighing heavily on the athletes is their performance. Martin has his team send him their time and mileage whenever they go on runs. He records the statistics in case they ever return to racing, so he’ll know where the team will stand in regards to performance. Despite all that Martin does for them, the senior runners are concerned about their future when it comes to earning a sports scholarship.

“If cross-country stays canceled, that will not be good at all,” said Rex Martin, son of Coach Martin. “We still have a lot to prove.”

It is because of this uncertainty that Rex Martin has decided to run at the Desert Twilight Cross Country meet in Queen Creek, Arizona. Although a number of schools aren’t scheduled to run, young athletes from various locations are said to be participating in an attempt to get noticed by college scouts.

Desert Twilight will have new regulations to try to keep athletes safe from the virus, such as social distancing and canceling the junior high/middle school races out of health concerns for young runners. The organizers stated in an online message that the purpose of the race is to allow school athletes to run and to keep them safe while doing so. Although they are still revising the meet to follow the current COVID-19 protocol set by the Arizona Interscholastic Association and Centers for Disease Control, the first of four sessions is scheduled to begin on Oct. 1 (a week later than usual).

Fully aware of the risks, Rex said he will be mindful of his surroundings and will be taking precautions whenever possible.

“Yeah, I’ve been a part of it [winning state titles],” Rex Martin said. “It’s definitely an accomplishment, but I had hoped to get one more [win] for school.”

Rex Martin isn’t the only one concerned about their career. Theo Martin stated he wouldn’t be surprised (nor would he be upset) if some runners move to schools that still have sports. He understands that they are trying to find an opportunity to race.

Although the team is spread far apart from each other and cell phone signals can be choppy, Theo Martin wants his team to be ready if and when the season starts.

“Training on our own can make them a stronger runner,” Theo Martin said. “When we come back together, they’ll be an even stronger team.”

Adams said he and other athletic directors on the reservation are collaborating and are following AIA and CDC guidelines to try to have a sports season this year. They may even have a late cross-country season during the winter if COVID-19 cases go down and if it becomes safer to participate in large groups again. Offering students sporting opportunities in the safest way possible is the goal, according to Adams. It may not be convenient, but the directors are working to give their athletes, particularly their seniors, a chance to shine.

Adams described their potential plan on the Navajo Nation to be in three phases, beginning with “Phase 0.” This first phase will have the athletes train on their own while communicating with their coaches via Zoom or email. The ultimate goal is to reach “Phase 3” where sporting events will return to pre-pandemic normalcy, but when that will occur is unknown. The planning is still being discussed, but Adams hopes to have a concrete agenda soon. It is his hope that they will have some kind of sport season for their athletes this school year.

“Here at St. Michael’s, we don’t just teach about the competition itself,” Adams said. “It’s a life lesson. You’ve got to stay healthy from here on out.”

Trent Holiday issued a statement earlier to his coach and school about how he felt about the school’s cancellation and what it could mean for the students.

“Just as every athlete, I miss my team and the sports,” Holiday said. “Us seniors are still hoping to have a season before we graduate. As a runner, most of us are fine because we’re tough, and runners always find a trail to run on. But most of us are wanting to race.”