Nez to deliver keynote at DNC 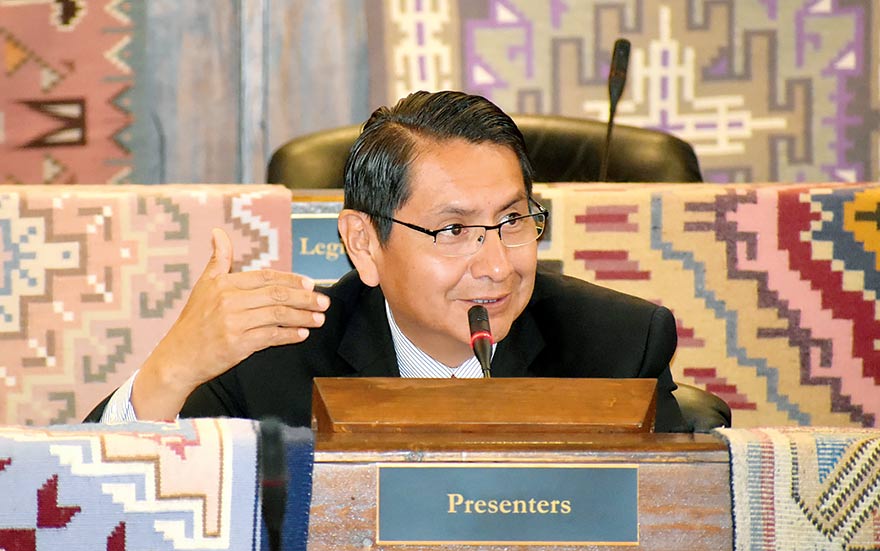 President Jonathan Nez presents his state of the nation report in this 2019 file photo.

Navajo Nation President Jonathan Nez will be one of 17 prominent Democrats who will give a keynote speech at this week’s virtual Democratic National Convention.

Nez has stated that he supports the Joe Biden and Kamala Harris ticket. Although his communication director Jared Touchin confirmed through text that Nez would be giving a speech, he didn’t mention what Nez will be speaking about. The speech will be aired Tuesday.

Nez said he is a delegate for Joe Biden and an honorary chairman of the Arizona Democratic Party.

In 2016, Nez endorsed and was a staunch supporter of then Democratic Presidential candidate Hillary Clinton. He was vocal in his support of Clinton throughout the entirety of the election, even attending her acceptance speech.

When President Donald Trump was sworn into office, Nez, who was Navajo Nation vice president at the time, did not attend but rather Council delegates and then Navajo President Russell Begaye did. These days when Trump, Vice President Mike Pence, or anyone from their administration visits Arizona, current Navajo Vice President Myron Lizer, a Republican and Trump supporter, meets with them.

In May 2019 Nez met with Biden’s wife Jill in Tuba City to view the ongoing development of the very first cancer treatment center on the Navajo Nation.

“The Navajo Nation was honored to welcome former Second Lady Dr. Jill Biden, the Cancer Support Community, and many health industry leaders and professionals to the Tuba City Regional Health Care Corporation in support of the very first cancer treatment center in Indian Country,” stated Nez at the time of Biden’s visit. “Working together through strong partnerships is key to providing these much-needed services for our Diné people who require cancer treatment.”

The Democratic National Convention will take place Monday through Thursday and air from 7 to 9 p.m. Mountain Daylight Time in lieu of an actual convention. Caucuses will meet virtually during the day with the Native American Caucus set for Tuesday.

The decision to hold the entire convention online was made to protect would-be attendees from catching the coronavirus.