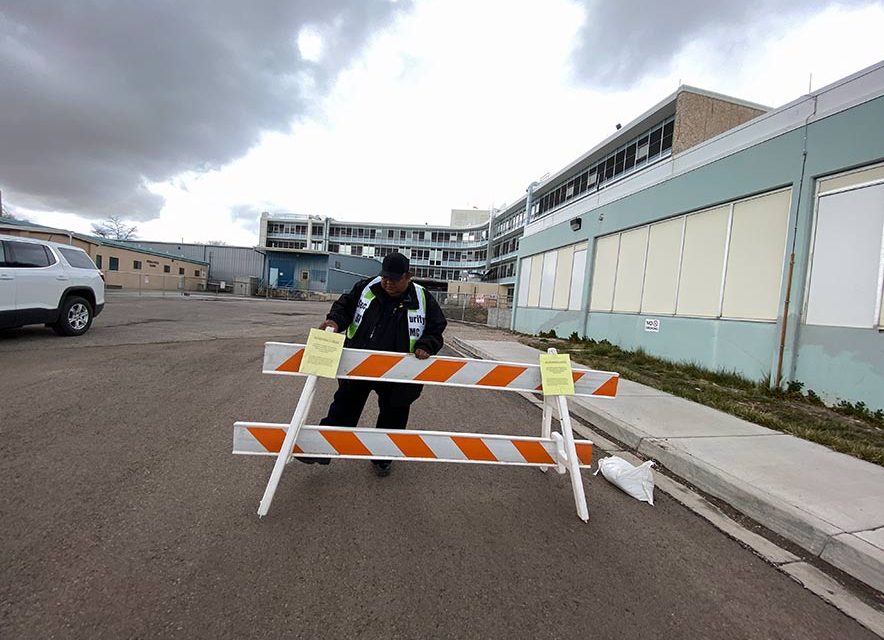 Navajo Times | Donovan Quintero
A Gallup Indian Medical Center security guard places a barrier to prevent traffic from entering the hospital property on Wednesday in Gallup. The hospital has been screening visitors in an effort to prevent the spread of the coronavirus.

Although there are still no confirmed cases of COVID-19 on the Navajo Nation, all three states that contain parts of the reservation were reporting cases as of Wednesday.

New Mexico has confirmed three state citizens have tested positive for the coronavirus, while Arizona has six confirmed cases, and Utah two.

Nationwide, only eight states remain uninfected as of Wednesday afternoon.

McKinley County Emergency Management, Gallup Police, Gallup Indian Medical Center, Rehoboth McKinley Christian Hospital and other agencies got together on Tuesday to brainstorm how they could better inform the county and surrounding areas.

The intent, said Adam Berry, coordinator for McKinley County’s emergency services, was to figure out the county could unite to get out the message on COVID-19.

Even as states, cities and news organizations, have all told the public to get their information from the U.S. Centers for Disease Control, people have been getting information about the virus from many sources, including rumors on social media.

Hysteria was heightened last Saturday by GIMC and other local health facilities starting a screening process for visitors to the hospital.

Guarded by security, medical screeners at GIMC stood behind a table, stopping and asking visitors if they have been coughing. If a person says “no,” then they enter. If they say “yes,” additional questions are asked.

GIMC representatives at the meeting highlighted that the approval process before they can pass on pertinent news about the virus sometimes took up to a week. They explained that to get approval, they first had to call the IHS Navajo Area office in St. Michaels, Arizona, who then had to call the IHS office in Washington, D.C., who then would approve or disapprove the information, and then send it back to the area office before it was sent back to the original source.

To circumvent the “red-tape”, the GIMC reps said people with questions can call the hospital directly and they’d direct the caller to a public health nurse. The hospital’s number is 505-722-1000. They have also set up a “drive-through” for people who want to be screened, they added.

Navajo Nation Council Delegate Amber Crotty said she’s been letting people know they can call a toll-free hotline to the San Juan Regional Medical Center in Farmington if they have any questions regarding COVID-19. That number is 888-949-5387.

Dr. Flor Caballar-Gonzaga with Rehoboth McKinley Christian Hospital was leading the charge on preparing the hospital for a potential coronavirus outbreak in the Gallup area.

According to an RMCH news release, they are closely monitoring the spread of the virus around New Mexico and the county.

RMCH stated they would be focusing on “testing anyone showing symptoms, providing adequate care for infected residents.”

Both hospitals said at the meeting they were working together to better provide services. They, too, were screening anyone visiting the hospital asking them if they were coughing or if they’ve recently traveled to areas the CDC states are infected areas. Both hospitals said they are prepared to intake anyone infected with the virus.

County officials and the Gallup Police Department have said they source the New Mexico Department of Health as their means of passing on COVID-19 related information.

Another issue that was discussed was shortages of personal protection equipment, or PPE, which consists of a full body suit, a mask, and rubber gloves that provide basic protection for health workers.

Both hospitals said they were low on PPE and have been working with other hospitals to ensure they do not run out.