NM flags at half-mast due to COVID-19 deaths 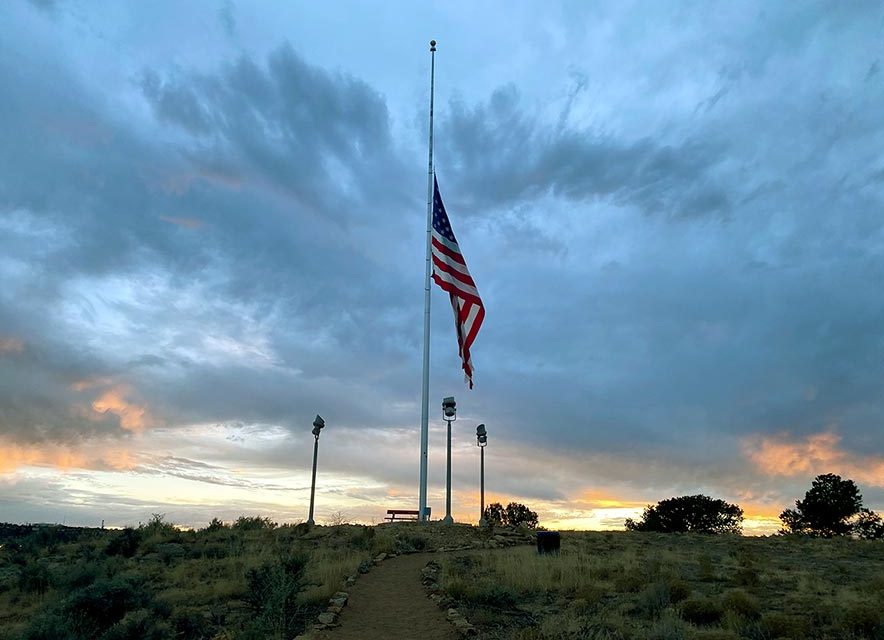 Navajo Times | Donovan Quintero
The large U.S. flag on a hill next to I-40 in Gallup is at half-mast in recognition of the more than 1,000 deaths reported due to COVID-19. New Mexico Gov. Michelle Lujan Grisham ordered state flags to remain at half-mast until Friday.

Since then, according to the New Mexico Department of Health, 29 more New Mexicans lost their lives to the virus, bringing Monday night’s number to 1,036. NMDOH reported its first death on March 25.

As of Monday evening, McKinley, San Juan and Cibola counties accounted for 491of the state’s number of deaths.

Grisham said the loss was an “unfathomable tragedy.”

“These are not numbers, they are not merely data points,” Grisham said. “They are mothers, fathers, husbands, wives, sons, daughters, grandparents, aunts, uncles, friends, neighbors, educators, first responders, nurses, doctors, business-owners, entrepreneurs. Every one of these 1,000 New Mexicans was loved by someone.”

Since March 11, when the NMDOH reported four positive tests, the number of positive cases began increasing but remained steady with three big spikes in April, June and July. In August, cases began to decrease.

Then on Sept. 24, NMDOH reported 237 cases, which was the last time the number of reported cases was that low. From that point, the numbers took a sharp upward turn.

Three days before high number was reported, 360 doctors, nurses and other health care workers signed a letter pleading with people to “stay home as much as possible” and to limit travel.

“If you must go out, please wear a face mask,” the letter read. “Make sure it covers your nose and mouth.”

The letter added that gatherings should be avoided and people should wash their hands thoroughly and frequently with soap and water.

Gallup Mayor Louie Bonaguidi said on Monday it was “too bad” the state had to lose a thousand people to the virus.

“The virus has turned us upside down in every direction,” Bonaguidi said. “All we can do is avoid social gatherings and social distance and pray we get this thing over with fairly shortly.”

As of Monday, McKinley County had a total of 262 deaths and 4,754 positive cases.

Grisham said flags across the state would remain at half-mast until this Friday.