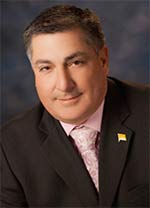 Sen. George K. Munoz, as he appears in a legislative directory.

State police confirmed the alleged incident on Monday morning. Fake IDs were allegedly used by the senator’s sons on Nov. 7 at Fire Rock Casino. Witnesses say Muñoz was present when his sons were caught, but state police did not say he was.

He added that, to his knowledge, the case was dismissed by “the courts” but did not know when it was dismissed.

According to the nmlegis.gov website, Muñoz has been a state senator since 2009 and is a member of the Senate Finance Committee and an interim member of the Indian Affairs Committee.

State police stated upon completion of their investigation, their findings would be submitted with the McKinley County district attorney’s office in Gallup, where it will be reviewed and a course of action determined.

New Mexico underage drinking law states that it is legal for a person under the age of 21 to drink so long it is given by a parent or guardian at an establishment that does not sell alcohol.