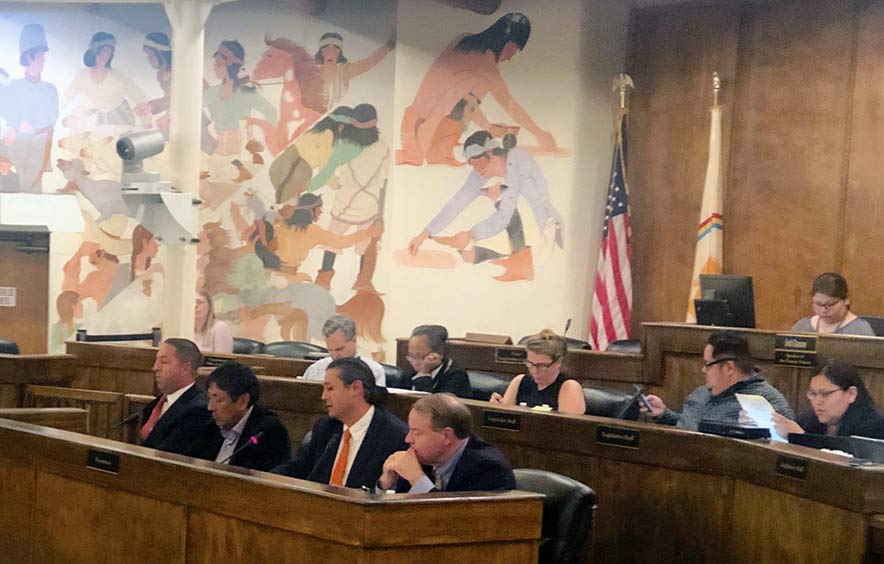 Navajo Transitional Energy Company board Chairman Tim Mclaughlin told members of the Naabik’iyati Committee last Thursday that purchasing three coal mines in Wyoming and Montana was an “incredible opportunity” that couldn’t be passed up.

“We will probably never see this type of deal again in the next who knows,” said McLaughlin. “It was an incredible opportunity and we took advantage.”

The NTEC report was moved to the end of the four-page agenda in order to get through other bills first. The report from NTEC was requested after a September Naabik’iytai meeting that was cancelled due to lack of quorum. But the committee heard a report from Department of Justice during that September meeting and that report, given by DOJ attorney April Quinn, left the delegates questioning the tactics used by NTEC to quietly purchase three coal mines from Cloud Peak Energy without consulting anyone within the Navajo Nation government, especially since NTEC is a Navajo Nation enterprise.

Quoting from NTEC’s enabling legislation, Quinn told the committee that NTEC is authorized to purchase assets, including off-reservation assets. “There is authorization there that they can conduct business outside of the Navajo Nation and have assets outside of the Nation,” she said at the September meeting. However, the sale involved NTEC waiving its sovereign immunity, which Quinn said should have been cleared with tribal attorneys.

NTEC has received much criticism and skepticism for purchasing the mines from a company that had declared bankruptcy. McLaughlin stood his ground and said the mines are exceptional and the reason Cloud Peak is in dire straights is because of bad financial decisions. “These mines, the mines themselves, are well run. They’re not the reason why Cloud Peak went bankrupt,” said McLaughlin. “Cloud Peak went bankrupt because they made a series of bad investments and took on $340 million of debt that they could not pay back.”

A board member since its inception in 2013, McLaughlin further explained the reasons behind the purchase of the Wyoming mines with the major one the need for steady revenue through 2031. “We are a coal mine that sells to one customer at Fort Worth Power Plant,” said McLaughlin. “With one coal supplier that ends in 2031, we don’t have anything after that. To make NTEC run for the long term, to make sure we have money to invest in other forms of energy, in other projects, we need to secure a revenue stream that will extend beyond 2031.”

Although NTEC was created in 2013 to buy the Navajo Mine, which McLaughlin said they had just paid off last year, NTEC’s enabling legislation requires NTEC to put 10 percent of its profits into moving the Navajo Nation toward alternative energy. “We bought a portion of the premier quality coal mine,” said McLaughlin. “It produces the highest quality of coal. It’s extremely low in sulfur. It is clean coal. It is in high demand by over 50 power plants across the United States.”

In September, the Institute for Energy Economics and Financial Analysis produced a report stating NTEC’s purchase of the Cloud Peak mines was a “questionable wager.” The report stated that production at all three mines has dropped enormously in recent years — even more so in recent months. The report noted that energy sector trends continue to move away from coal electricity generation, which threatens the economics of almost all coal produced in the Powder River Basin where the mines are located. But NTEC had its own study done explaining the investment is prudent for NTEC and for the Nation.

It stated although PRB coal will decline in volume, demand would exceed 250 million tons per year past 2030. It also stated NTEC is purchasing these mines at a low cost. Assets include one billion tons of leased coal, almost 100,000 acres of owned surface lands, and a huge fleet of mining equipment. The purchase price is $15.7 million plus a seller note of $40 million to be paid over time. NTEC won’t be assuming Cloud Peak’s debt. “IEEFA merely speculates that if customers change their purchasing practices and consolidate purchases, this would be a risk for Cloud Peak,” stated NTEC. “There is no evidence that customers will change their historic purchasing practices because these are founded in purchasing policies.”

Karl Cates, IEEFA research editor, said the institute stands by its research and its conclusion that this proposal is ill-timed and ill-advised. But as of Oct. 2, the purchase is a done deal after a U.S. District Court in Delaware approved the sale of substantially all of Cloud Peak Energy’s assets, marking the final approval needed to transfer the company’s Montana and Wyoming mines to NTEC. “If it proceeds, Navajo Nation in all likelihood will rue the day NTEC executives made Cloud Peak a Navajo-owned outfit,” Cates said in a statement to the Times.

“The business case for the acquisition remains weak, as energy markets continue to move away from coal-fired generation,” he said. “Questions about reclamation liabilities are emerging now, too, especially around Navajo Nation exposure to hundreds of millions in cleanup costs attached to the deal.”

McLaughlin countered that the decline in coal has plateaued globally, and there is an increase in consumption and production domestically and internationally.

He used Germany as an example, as that country had invested in solar and is now experiencing reliability issues with the country’s power grid. Now they are starting up their coal plants again. He said Japan, the site of the Fukushima Daiichi nuclear disaster in 2011, is building coal-fired power plants and no longer nuclear power plants. “You’ll see the demand domestically for premium coal,” said Mclaughlin.

Will cash come back?

As an NTEC shareholder representative, Budget and Finance Committee member Nathaniel Brown said the company is only obligated to have one shareholder meeting a year. He stated that the purchase was a “good risk” to take and he said other tribes who separate politics and business are “extraordinarily successful.”

But he asked McLaughlin how much of the revenue from this business venture will come back to Navajo Nation coffers. “I don’t think you can explain this enough to our Navajo people: How you will ensure us that if NTEC fails in this purchase, how would the Navajo Nation assets be protected?” asked Brown. “How (will) our people’s Sihasin, Permanent Trust Fund will be protected?” he asked.

Having been sworn into office only hours before the NTEC presentation, Delegate Carl Slater asked what would happen if the political parties change both in Congress and the U.S. presidency. He noted the Democrats are talking about regulating carbon emissions. “Thinking of money, solely, shortens our horizon,” said Slater. “Sure, it will keep us afloat for the next few years, but what happens after that?”

Bernard Masters, NTEC’s general counsel, said the current plan is to continue to operate the mines as they have been operating. Although during the September meeting committee members had expressed a more severe tone, at this meeting they were passive and grateful to NTEC for making a presentation even if it wasn’t with Clark Mosely, NTEC’s CEO, or any of the other executives they had wanted to hear from.

McLaughlin, Masters, NTEC counsel Brian Lewis and Steve Grey, director of governmental and external affairs for NTEC, were the presenters. “In 2013 … they pulled us to the side, (stating) the resounding theme that we were told by members of Council and former president,” said McLaughlin, “we were told to ‘make this work. Make this a company we are proud of. Make this a premier energy company.’ That’s what we’ve been trying to do and that’s what we are doing.”