One percent of reservation residents test positive for COVID 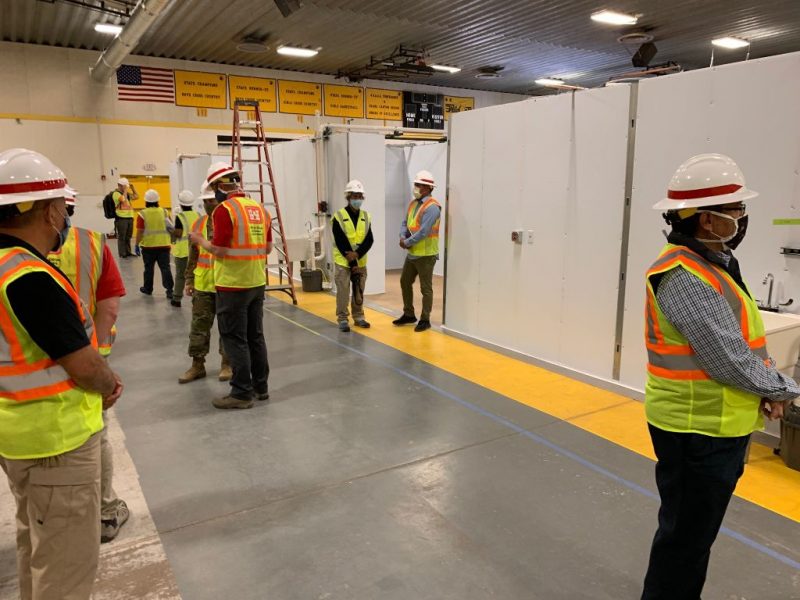 Navajo Times | Cindy Yurth
The U.S. Army Corps of Engineers is turning the Chinle Community Center into an overflow hospital for COVID-19 patients.

As of Monday evening, there are 1,769 positive COVID-19 cases on the Navajo Nation, more than one  percent of the residents on the reservation. This includes 839 males and 930 females, with an average age of 47. The total number of deaths remains at 59, which includes 39 males, 20 females, and an average age of 65 years old.

The good news is no new deaths from COVID have been officially recorded in the past three days, and the 53 new cases continue a steady decrease since the high of 180 on April 24.

“Federally recognized tribes stood together to oppose the actions of the Department of the Treasury in another attempt to undermine the first citizens of this country, but our voices were heard and Indigenous people prevailed today,” stated Navajo Nation President Jonathan Nez. “I’m sure there will be other attempts to direct these funds away from tribes, but we need to remain strong in our position and continue to ask our congressional delegation to continue fighting alongside us for our fair share of CARES (Coronavirus Air, Relief and Economic Security) Act funding.”

Last Wednesday, Navajo Nation joined in a lawsuit with 10 other tribes against the U.S. Secretary of the Treasury over COVID-19 funding.

The $8 billion was intended to help tribal governments fight the COVID-19 pandemic under the Coronavirus Relief Fund.

The Navajo Nation has been the hardest-hit Native tribe and since the first COVID-19 cases were reported Navajo has been using its own resources and donations to go toward fighting the virus while awaiting funding from the federal government.

Navajo enterprises have donated over $2.7 million, and $4 million from the Unreserved, Undesignated Fund was also allocated toward the COVID-19 battle. Nez had mentioned the tribe is looking to get reimbursed by FEMA for the $4 million. There have also been many donations from outside entities and individuals, not to mention grassroots relief groups that have been raising funds to help their communities.

“The Congressional intent of these funds is to relieve federally recognized tribal governments and most importantly, their people,” stated Vice President Myron Lizer of the CARES Act. “The ruling does not fully address everything we had asked for, but we continue to urge the Department of the Treasury to release all funds for federally recognized tribes immediately”.

During Sunday’s town hall New Mexico Gov. Michelle Lujan Grisham said the federal government is waiting too long to get much needed resources directly to Navajo. The governors of Arizona and Utah were invited to join in on the town hall but they weren’t able to participate.