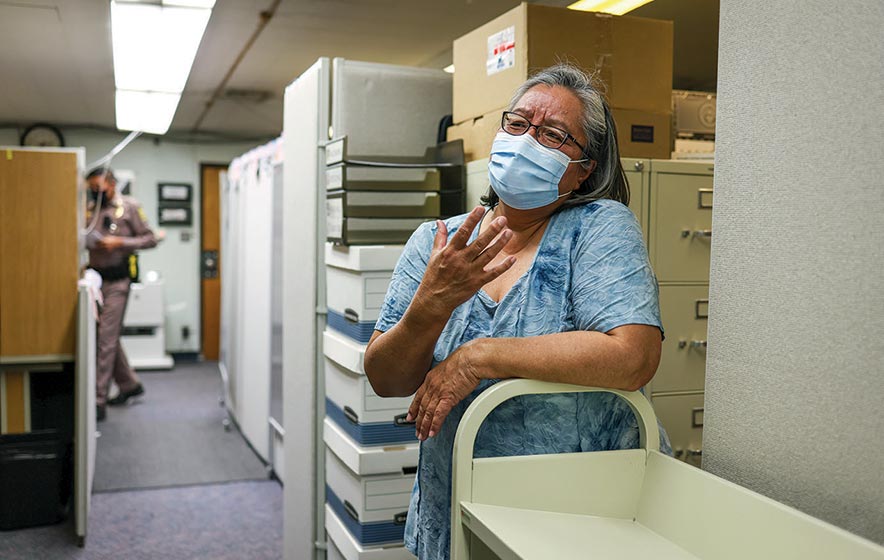 Navajo Times | Sharon Chischilly
Laverne Buffalo, account maintenance specialist, stands outside of her cubicle in a tiny office where exposed wire is seen in the background Monday at Navajo Nation Police headquarters in Window Rock.

Lavern Buffalo stood in the tiny office that she shares with four other employees at the Navajo Nation Police headquarters.

One would think it was a storage closet but, no, it’s an overcrowded office were Buffalo, Bertha Largo, Adrienne Joe, and another colleague come to work every day.

These women are the paper pushers of the Navajo Nation Police, the ones who make sure officers get paid, get their equipment, get hired … and they do it in a tiny corner with little ventilation, asbestos lurking in the walls, and no room or security.

“The ventilation … there’s a hole up there,” said Buffalo, an accounts maintenance specialist who deals with purchasing for the police department, and has worked at the NNPD for over 30 years.

“The cold air will blow in and we have to stuff paper up there,” she said. “Then it gets hot and we take out the paper again. These other vents are constantly closed because they blow cold air.”

There is a door leading to the outside that they open for air, but the last time they did that a snake came in.

Buffalo and a former colleague who shared the office both contracted COVID-19.

From the beginning of the pandemic, they had no choice but to come in and work. When other Navajo Nation employees were able to leave and work remotely, and lawmakers were able to meet telephonically, these ladies, along with Chief Phillip Francisco, his officers, and the rest of the staff continued to come in and work in a building that everyone, including lawmakers, knows should be condemned.

“All of us here, we do our best,” said Francisco, who has been trying to find a new home for his officers and support staff since he was hired as chief nearly five years ago.

“They work hard,” he said. “We have no choice. We can’t just stop working like other departments and go home. Things have to be purchased; officers need to get paid. We haven’t stopped this entire time.”

Francisco remembered when he was first hired and saw the Navajo Police headquarters he’d be working in and thought, “What am I getting myself into?”

In his first office, when it rained the water would drip out of the ceiling and flood the carpet, leaving a moldy stain.

When inside the building for long periods, he experiences severe headaches, lethargy and watery eyes.

He’s not the only one. Many staff members, including Joe, have reported health effects from the building.

“Before the masks, before COVID, I got sick a lot,” said Joe, as she stood near the filing “rotisserie” that is built inside the wall and holds hundreds of personnel files as well as asbestos.

“Now that I’m wearing masks, now it’s been OK,” she said. “Our building in the summer is extremely hot and in the winter it’s extremely cold.”

But because these ladies weren’t seen as frontline workers according to the hazard pay rules and guidelines set by the controller’s office, they weren’t eligible to receive hazard pay.

He said these ladies are “the unsung heroes” who get little recognition from the outside.

The issue of who deserves hazard pay was also addressed during a March special session of the Navajo Nation Council when Attorney General Doreen McPaul had to explain to lawmakers why her attorneys “sitting behind a desk” deserved hazard pay.

But even after she explained, delegates did not necessarily agree.

“My administrative staff deserves hazard pay as they were required to work and put themselves on the front line to continue to provide essential support for our police officers,” said Francisco.

Joe’s cubicle has been fitted with a sliding shower door — the only kind of door that will fit in the tiny space — because it holds sensitive personnel documents.

It may have helped protect her when Buffalo and a colleague both got COVID — Joe’s cubicle is in between those of the two women.

Joe, who has been working at the headquarters for 10 years, said they were told a few times they’d be moving into a safer building, so moving boxes are ready. But that day hasn’t come yet.

Francisco had hoped that he could move his staff out of the building this spring but that plan ultimately fell through.

It took Navajo lawmakers weeks to approve over $300,000 to purchase the prefab building used by the U.S. Census so that NPD could move into it.

But because the lawmakers took too long to get legislation through the process, the owners of the building grew tired of waiting and decided to keep the building. Now they are back where they started.

“My staff said, ‘Just get comfortable because who knows?’” said Francisco, who added he’s inquired about other abandoned buildings in the area but was turned down for one reason or another.

The vacant Navajo Pine grocery store, the abandoned credit union building and another building next to Navajo Housing Authority were all denied him.

He even asked Navajo Department of Transportation to use some of their offices, but that wasn’t allowed.

The current plan is to purchase a modular building from an Albuquerque company that costs more than the Census building, not to mention purchasing all the necessary accouterments to make it into a police station.

In a 2015, an indoor air quality investigation conducted by EnviroScience Consultation on the 1952 building reported there was evidence of excess slab settling, jeopardizing the structural integrity of the building.

The investigation revealed constant moving and shifting of the walls. Due to roof system failures and failed plumbing systems, several parts of the building have been water-damaged, resulting in microbial growth and deterioration of building materials.

These are just a few examples of issues that need to be addressed. The report was concluded a year before Francisco took office. Since this investigation was done the second floor, which housed several courtrooms, was vacated.

Lawmakers have brought up the building issues on several occasions, but never come up with a solution. When police issues are discussed at committee or Council level, delegates — most of whom have never worked in law enforcement or were officers decades ago — criticize Francisco’s leadership, highlight what they see police officers are lacking in, and regurgitate unconfirmed anecdotes and claims given to them by their constituents.

“We continue to not get a good response or cooperation (on a) solution in regards to how do we address these issues,” Law and Order Committee member Vince James told Canyon De Chelly National Monument Superintendent Lyn Carranza during Monday’s LOC meeting, which kicked off Police Week.

“We try to ask for answers,” James said. “We are always being bad-mouthed as LOC for picking on chief of police and (Public Safety) Director Jess Delmar.”

Francisco said he has the answers to questions delegates may have but they never meet with him directly, and none of them have visited him at his office inside the aged police department.

He said lawmakers usually wait for livestreamed meetings to bring up their concerns, and he feels he’s being censored by either being cut off while talking or not given a chance to speak during meetings.

Delegates have stated Francisco’s need for more officers is just an excuse not to respond to calls.

Francisco cites a recent study done by a consultant who found NPD needs 500 officers realistically to cover the span of the Navajo Nation. Right now it has fewer than 200.

Three years into this administration, Francisco feels the unceasing lack of support from lawmakers has his department at a standstill, but the officers and support staff continue to work.
As for the women, Buffalo and Largo are planning their retirement. Joe will be moving to Shiprock District, and this worries Francisco because replacing their knowledge and experience will be difficult.

“We are the backbone of our officers,” said Joe. “We take care of our officers. I was looking forward to the Census building … but even that wouldn’t have taken care of the job because they were going to cram everyone in that building.”