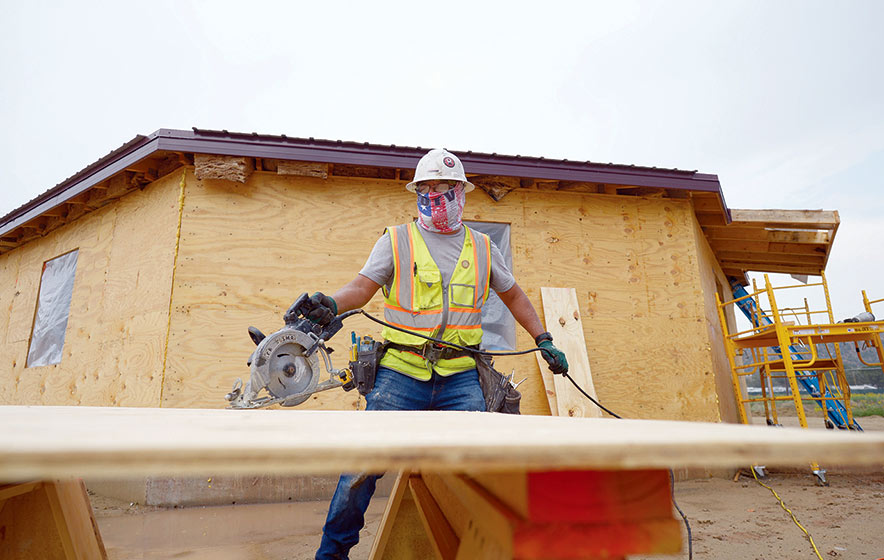 Navajo Times | Donovan Quintero
Gil Bia, from Albuquerque and originally from White Clay near Sawmill, Ariz., prepares to place a board for the roof of the prototype hogan for veterans on Monday in Tse Bonito, N.M.

More than 1,400 Navajo military veterans who have been on a waiting list – some for more than 40 years – to get a home may not have to wait for much longer.

The hogan under construction, for which eligible veterans will begin the long, red-tape process to get, is a 1,200 square-foot, two-bedroom hogan with a kitchen and bathroom.

Zwierlein said the homes could have three bedrooms.

The home is American with Disabilities Act compliant. Each two-bedroom home is estimated to cost $130,000, including materials, labor, and transporting the houses to communities.

But because of the coronavirus pandemic, material costs have risen considerably, Zwierlein said, bringing costs to between $250,000 and $300,000.

“It is still under the average that’s authorized by HUD (Housing and Urban Development) for NHA (Navajo Housing Authority) to build a two-bedroom home,” Zwierlein said.

Design issues and delays in material supply – such as windows and doors – have hindered construction. But that is expected in the construction industry, said Zwierlein.

Once the prototype is completed, it will include a skylight and furniture, possibly from Ashley Furniture in Gallup. Zwierlein said he was awaiting a response from the company.

The red tape entangling the housing program is being restrung, Zwierlein said, but while a resolution was going through the Resource & Development Committee, the Veterans Administration mistakenly created a new position.

The new position was assigned all the responsibilities of the program. The resolution is being “fixed,” said Zwierlein.

“That allows the floodgates to open, and we can start turning and burning on everything,” he said.

“They will assess all of the applications to check, double-check, triple-check to make sure that nobody is putting any bias or favoritism or discrimination against any of the applications,” he said. “So the veterans are all treated equally and fairly.”

To apply for a home with the Navajo Veterans Administration, honorably discharged veterans need to provide required documents: DD214; land ownership documents like a home-site lease; Certificate of Indian Blood; home-site area map; VA Disability Rating Documentation; certified chapter resolution that states they are displaced if their home burned or if a natural disaster destroyed their home, or if they’re homeless; birth certificate; marriage license or divorce documentation; birth certificates or custody for dependents under the age of 18; transcripts or other current educational program documentation; employment status, like a paycheck stub; and other income.

Once all the documentation is gathered, the veteran must turn them in at their local veterans’ agency office. A housing specialist then certifies if the veteran has all the required documents before signing off and sending them to the housing selection committee, which has not yet been created.

To ensure no discrimination or favoritism influences the eligibility status, the veteran’s name will be redacted, said Zwierlein.

Or if they do not make the home their permanent residence; or fail to disclose they have a pending application with another governmental housing agency within the last 15 years; or if they attempt to sell or transfer the home to someone without prior written consent from the NNVA executive director.

Zwierlein said the NNVA has not built a home for a veteran in the last four years. No one knows how many Navajo veterans there are, but NHA estimates there are about 10,492 Navajo veterans across the reservation.

“It’s hard to say,” Zwierlein said when asked when a Navajo veteran could be handed the key to a new hogan.

He said the NNVA has applied for American Rescue Plan Act funding because housing shortages are directly COVID-19 related.

“The definition of homeless veterans that we use is a veteran that does not have a permanent place to live,” Zwierlein said, “and typically finds shelter living with family or friends under the same roof. That creates what we define as overcrowded housing conditions.”

Building veterans housing would reduce the spread of COVID-19, he said.

“If we are able to get ARPA funding, in the amount that we’re asking for from the Navajo Nation Council, we have to expend it in three and a half years,” he said. ‘So that would allow us to build about 500 homes a year for the next three years. And that will clear our wait list.”

Gil Bia, from Albuquerque, originally from White Clay near Sawmill, Arizona, said his family and his wife’s family have military veterans.

When he talks to them about his involvement in helping construct the prototype hogan for NNVA, they mention the paperwork.

“The long paperwork process, that’s the only thing they don’t like about it,” Bia said, who is a superintendent with the Sparrow Group, a Native-owned contractor and construction services company based in Albuquerque.

Bia said he tells his veteran relatives not to give up.

“I told them just keep applying, you know,” he said. “Keep trying and eventually you’ll get it, you know, because we’re here, we’re here to build these houses for these guys.”