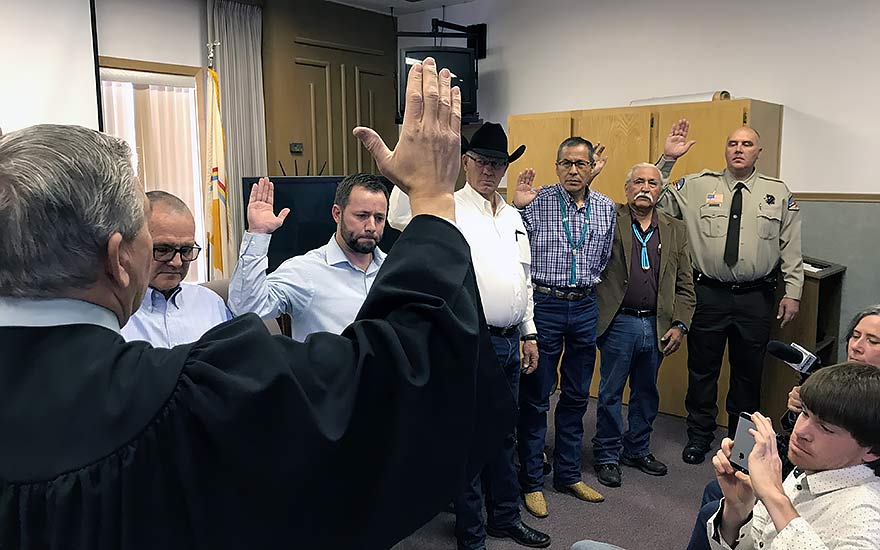 Navajo Times | Cindy Yurth
Willie Greyeyes and Kenneth Maryboy (second and third from right, respectively) are sworn in by a judge along with other elected officials on Jan. 7, 2019.

When Mark Maryboy took the oath to be San Juan County’s first Navajo commissioner back in 1985, he recalled, there were three people in the audience.

Today, as Willie Grayeyes and Mark’s brother Kenneth Maryboy were sworn in to the county’s first majority Navajo commission, it was standing room only.

“The world is changing,” observed Mark Maryboy, “and that includes San Juan County.”

It’s been a long road to this change, including multiple lawsuits against the county that finally prompted a redrawing of decades-old voting districts that the Navajo Nation had argued were balanced toward the county’s white minority.

And it’s not over yet … Grayeyes’ Republican opponent, Kelly Laws, last week filed a suit against Grayeyes alleging he doesn’t live in the county.

“I imagine there’s going to be more of that,” Maryboy predicted grimly. “Some people in this county don’t like giving up their power.”

If the continuing legal battle was affecting Grayeyes’ mood, he didn’t show it as he beamed and accepted congratulations from supporters and family members.

“I question why he would do something like that at the 11th hour,” shrugged the new commissioner when asked about Laws’ suit. “Maybe he’s jealous because I’m getting all this publicity.”

Grayeyes quickly deflected the publicity, though.

“This is not my accomplishment,” he said. “It’s all the people that voted. You should be talking to them.”