“The Indigenous people have been fighting for decades,” said Holiday, a Train Rock, Utah, resident. “(Bears Ears) is a healing ritual for our people. Don’t take that away from us.” 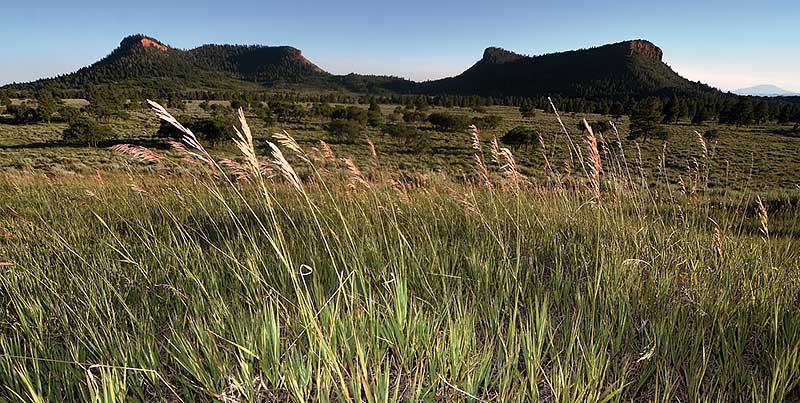 Jean said her late father, John Holiday Sr., who was a hataałii, and her late brother, Albert Holiday, were two of the first advocates of Bears Ears.

They joined the five tribes – and their supporters – that formed the Bears Ears Inter-Tribal Coalition and pressed former President Barack Obama for a monument designation.

“My father was a medicine man from that area, and he told us (his family) stories about how Bears Ears is a temple to our people,” Jean said. “(Bears Ears) is where we go to pray to our deities, and it can provide medicine for us to heal.

“These Bilagáana don’t understand,” she said. “They come here (to our country) and say, ‘religious freedom’ and took our religion. Now they’re taking what little we have left to protect, and they want it all. To me, it’s inhuman.”

Jean says the Diné ancestors lived here for many years and their history and culture are essential to Diné today.

Jean fears the land could come up for auction one day as drilling and mining threats are inching closer to the national monument.

On Dec. 4, 2017, Trump sharply reduced Bears Ears and Grand Staircase-Escalante by some two million acres and pushed for fewer restrictions and more development on public lands.

On behalf of the Hopi, Zuni and the Ute Mountain Ute tribes, the Native American Rights Fund on Nov. 2, 2019 filed an amended complaint to protect Bears Ears.

The Hopi v. Trump complaint indicated that drilling, mining and other activities had occurred since Trump signed the proclamation to revoke Bears Ears.

“But we stand by (President Joe) Biden, and I hope he stands by us,” Jean said. “Indigenous people have been fighting for decades, and we will continue to fight. (Bears Ears) deserves to be protected, and we will keep fighting for it.”

Jean says Natives used to live around the Bears Ears area over countless generations and developed an understanding of the environment that they rely on for physical and spiritual sustenance.

The ancestors were scientists in a way. They made sense of the world through questioning, hypothesizing, and observing and shared it through songs, stories and oral transmissions that non-Natives may not understand.

“The reason is that they’re always bringing up laws, regulations, and procedures,” Jean said. “And they build fences around it, and we can’t get into it today.”

Jean said when she was a middle-schooler, she traveled with her father to Bears Ears for tá’dídíín dootł’izh when a non-Native rancher showed up and asked what they were doing there.

Her father, who spoke only Navajo, asked his daughter to tell the rancher they were there to gather herbs. Jean remembers an argument that ensued from his questioning.

“I think they continue to do that,” Jean said, “even when you’re collecting sagebrush. How greedy can they get making all these procedures and policies and regulations (that) seem like toward us.

“Let’s not quit here and abandoned our ancestors and how they valued the land around Bears Ears,” she added. “The younger generation, they need to continue to fight.”

Utah and two of its counties are challenging the Biden administration’s designations of Bears Ears and Grand Staircase.

The BlueRibbon Coalition, an Idaho-based motorized-use advocacy group, made similar arguments and filed suit, claiming the monument designations pose the risk of “destroying their livelihoods” if allowed to stand.

The coalition, “dedicated to preserving motorized access to public lands,” and others argued that the restoration of the national monuments was much broader than the Monuments and Antiquities Act of 1906 allows.

Ben Burr, executive director for BlueRibbon, said in a statement that Biden’s proclamations make a mockery of the Antiquities Act and “transform it into a power without any discernible limit to set aside vast and amorphous expanses of terrain above and below sea,” quoting Chief Justice John G. Roberts.

“President Biden’s abuse of power will have – and is now having – profound practical consequences for the people in our community,” Burr wrote in a statement.

“In its simplest form,” he said, “a ‘national monument’ designation means lands that were once open for multiple uses for public benefit are now shut off to the public to accommodate the narrow interests of politically connected stakeholders.”

Burr said unless the courts step in, the threats would be irreversible.

“President Biden’s proclamations are the latest in a long line of attempted executive power grabs that take old or vague statutes and try to resolve major policy issues without broad support from the American people as expressed through their elected members of Congress,” Burr said.