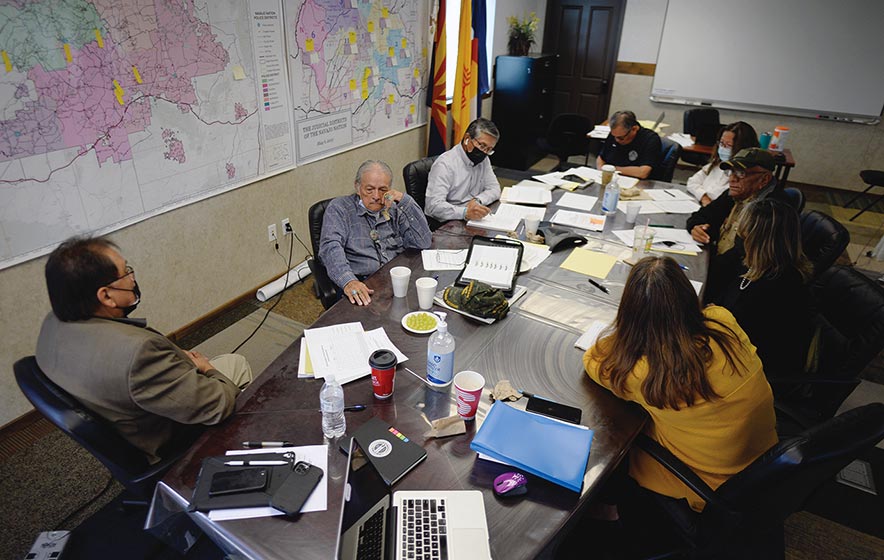 Navajo Times | Donovan Quintero
Board member Young Jeff Tom, center, looks tired after a day of discussion over the certification of the recount of the Primary Election vote for president. The Navajo Board of Election Supervisors decided to table the issue.

The Navajo Board of Election Supervisors’ attempt to certify the recount of the 2022 Primary Election for president did not go as planned.

Nearly three weeks after the first-ever recount of all 110 chapters, the election office met with its board last Thursday during a regular meeting in Window Rock.

On the agenda was to finalize proposed legislation that would canvass and certify the Primary Election results in the presidential race. They also worked on a proposed resolution for the Navajo Nation Council delegate races.

When the proposed resolution was read into the record, board Chair Melvin Harrison said he wanted the resolution to reflect only the hand recount.

“This is only hand-count numbers, not the machine count,” Harrison said last Thursday. “We should just do the hand count because it’s more accurate because the hand count was counted numerous times.

“The numbers were maybe off by one or two or whatever, but in the end, it came out correct,” he said. “I think it’s better that we utilize the hand count.”

Harrison added he wanted the hand-recount results read into the record, despite a concern raised by Raymond Maxx, who represents Western Navajo, who said he “wished” they had a before and after comparison they could look at.

“But all we have is the recount that we have from Friday. Let’s provide those numbers,” Maxx said.

“This is from the hand count that was conducted during the week of Aug. 29 through Sept. 2,” Kelly told the board.

Incumbent Jonathan Nez had the most significant increase of the 15 presidential candidates — his numbers went from 17,073 to 17,191.

Votes for Frankie Davis and Kevin Cody remain unchanged. Greg Bigman was the only candidate with votes taken away — from an official 1,198 votes to 1,192 votes.

“These numbers are all comprehensive from the five agencies: Chinle, Eastern, Fort Defiance, Northern, and Western Agency,” Kelly said after she read the recount numbers.

At first, it seemed like the numbers collected during the five-day recount would be certified by the election board.

Election board member Arlene Nakai Brown said she wanted Kelly to post the recount numbers on the election administration’s website as soon as possible.

“The folks that are here with us, those are the final numbers that came out of the recount,” said Maxx, the election board vice chair. “Get this information out right away by whatever means we have.”

Arbin Mitchell, who represents Fort Defiance Agency, said he was in a conflict of interest because he is a paid staff member of the Nez administration and asked for a complete summary of the canvassing process after an election.

Ellison, Branch, and Jumbo-Fitch called out Mitchell for his political affiliations.

“The process is that your office does the canvassing after the 10th day, but this didn’t happen because there was a grievance that was filed for a recount,” Mitchell said. “Maybe that’s why a canvassing was not done.

“We could have gotten to those unopened ballots with canvass,” he said. “So, maybe explain that process. That way, the public who are listening can say we were about to canvass the ballots anyway before the grievance.”

Kelly said since a complete recount of all 110 chapters has never been done before, the election office had to develop procedures. And working with Automated Election Services, she said, they created a system to do a recount of all 110 chapters. Kelly also highlighted that her office still needed to prepare for the Nov. 8 General Election, which is less than two months away.

“So, we still have to get ready for that,” Kelly said.

“Some of them don’t do it. So, the ones that didn’t recommend poll workers, it falls back on election administration to find poll workers,” Kelly said.

“Some of these poll workers called in at the 11th hour, the night before the election, called in saying that they came down with Covid or they had another engagement, so they won’t be showing up,” she said.

Ellison, who joined the board meeting by phone, said a lack of election personnel also meant a lack of personnel with training.

Ellison suggested that Kelly squeeze the board members with influence and political experience, like Mitchell and board member Young J. Tom, both of whom could request funds from the president’s office or Council, and those funds could help pay for training.

“If you want to improve this process, that’s what you have to do,” Ellison said. “But yeah, you’ve got board members there, Ms. Kelly, who has some influences. Lean on them – Mr. Mitchell, Mr. Tom can deliver.”

At the end of the recount, Jumbo-Fitch identified 89 discrepancies from 104 chapters, seven of which they audited.

On the fourth day of the recount, she identified Teesto Chapter was allegedly missing 101 ballots.

But those ballots were located, Jumbo-Fitch said, stating election officials from the chapter told the candidates the lost ballots had mixed in with unused ballots still sealed inside their plastic wrapping.

Ballot boxes made of plywood and suitcases used to keep ballots secure were also noted as not being secure enough, which could lead to possible vote tampering.

Jumbo-Fitch, a Chinle native, said tribal leaders seemed to work against the young people they encouraged to go to college and earn an education.

She earned a doctorate in curriculum and instruction from Northern Arizona University and started a construction company while in school.

“When we come home, it seems like we’re met with this opposition by our leaders, instead of assisting and acknowledging the fact that we have an issue that we all need to address together,” Jumbo-Fitch said last Thursday.

“As Navajo people, we continue to fight our own,” she said. “And this is a perfect example here of trying to change something for the better.”

Branch, who encouraged her supporters to vote early so they wouldn’t encounter long lines on Election Day, said she was disturbed that the tribe was not taking the voice of Diné and the right of the people to vote seriously.

The former Navajo Nation attorney general said the voting rights of absentee voters were predominately less under tribal practices and its political system.

Branch explained a Navajo voting absentee in a tribal election had to overcome a bombardment of obstacles that began with submitting a request to get an absentee ballot, which they had to do by mail.

Between 20 to 30 days later, they’d get an application, which had to be notarized, in addition to showing proof of identity with a valid government-issued photo ID.

“We’re treating our absentee voters unfairly and creating all these hurdles for them,” Branch said. “And so, to me to know that there are so many people who request, who jumped through all those hoops to get their absentee ballot and to exercise their right to vote.

“They never got that opportunity because they never received their absentee ballots,” she said.

Davis said her attorney, David Jordan, on Monday, filed an injunction to halt the certification of the election for president recount last Friday.

“The injunction is going to stop everything right now,” Davis said. “I believe we do need a halt to reassess to see and look at what has transpired.

“We need to step back,” she said. “Instead of just accepting to believing that the board knows better or that they’re doing their best or they’re being honest, we have learned that that’s not the case. So, we need to say stop – let’s reassess.”

During the Sept. 8 meeting, Maxx suggested the board take a recess when a staff member said the recount numbers weren’t adding up.

“The way that we are working as best as we can to make the amendments or changes and it’s still not adding up, but we’re doing the best we can,” a staffer said to Maxx.
“Review the numbers and make sure they’re accurate,” Maxx said.

Voter registration specialist Virginia Nelson chimed in and told Maxx the company, AES, that helped with the recount had not yet shared any documents they could use to compare their recount.

“This is not good,” Maxx said.

Harrison agreed with him.

Maxx suggested the board recess for an hour so staff could correctly tally the recount.

An hour later, the board reconvened. Mitchell asked Kelly if any of the top four positions had changed.

Kelly said there was no change in the positions, but some vote counts changed.

Kelly told the board Manson’s recount tally had decreased by two votes, going from 777 votes to 775.

Kelly was interrupted by one of her staffers who said she had the wrong recount numbers. Sounds of dissatisfied grunts and sighs quickly filled the room from board members and Kelly.

A second attempt to ensure the numbers were accurate was made, and the attempt opened a can of worms for the election board and staff.

Earlier, Kelly read into the record that Nygren’s hand recount was 12,994. But Harrison saw that the new numbers changed drastically, dropping to 12,825. Election staffer Vera Morgan added the numbers for Nez’s challenger and tallied a whole new vote count: 13,005.

Harrison then asked why Manson’s numbers went down.

“You need to check all these numbers. I don’t think a number should go down,” Harrison said. “It should most likely go up or remain the same.”

Maxx then ordered the staff to hurry.

“Can you recheck that? As well as the next one for Bigman – it was 1192 on the one before we went to lunch, and the current one is 1128, so that went down,” Harrison said. “And the one for Jumbo-Fitch went down by two as well. So, I think those need to be rechecked.”

“Please understand that I’m working under pressure, and I’m trying to do the best I can,” Morgan told Harrison.

A poll official from the Chinle Agency joined the board meeting and said votes from the Forest Lake Chapter were incorrect for Branch, Bigman, Dayish, and Jumbo-Fitch. They were corrected and sent to Morgan, the election board was told.

“Yeah, I think we should table this,” Harrison said.

“I would like for us to table this specific resolution and bring it back up in two weeks to make sure everything is accurate,” she said.

The next regular Navajo Board of Election Supervisors is scheduled for next Thursday at 9 a.m.