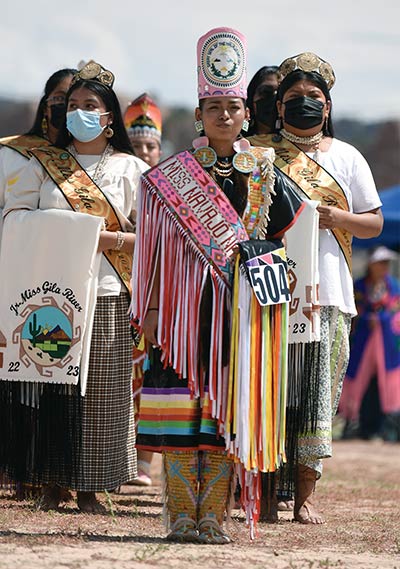 Reflecting on the large and enthusiastic turnout at the Navajo Nation Fair Powwow last weekend, longtime Powwow Coordinator/MC Mike Salabiye said it’s like a “revitalization of life” is happening now after COVID-19.

“There are so many things that have been rekindled in terms of the spirit of the dance,” said Salabiye.

This includes the profound and sacred way songs and dances affect everybody, spiritually and emotionally, bringing happiness and harmony, he said.

“After being cooped up, now being able to come back out into the public, while still maintaining measures of safety, we’re able to get back together and hear those songs and see those dances,” said Salabiye.

More than 250 dancers participated in the powwow and gourd dance, Salabiye reported, with eight drum groups present and bleachers full of spectators for a good portion of the weekend.

“There are so many teachings within the circle and also around the drums that people shed tears, some of them in memory of people who didn’t make it, but also just the celebration of life,” Salabiye said.

Although there were several major powwows happening last weekend, Salabiye said people still flocked to the Navajo Nation Fair powwow because of all of the other special events offered.

“We have the huge rodeo, song and dance, the queen pageant, the parade, and Navajo arts and crafts,” he said.

The Navajo Nation Fair also provides the opportunity for Diné living off reservation, including many who participate in powwows, to come home, he said.

“We have championship drum groups and dancers that win across the country, from tiny tots to elders,” he said. “It’s a good time for them to showcase their talents and visit with their elders who aren’t able to travel across the United States.”

“It was people, all throughout the fair – the exhibits, the carnival, the powwow – so glad to be able to see each other again, reuniting and continuing how we used to live before the pandemic,” said Shebala.

“We all realized how important and precious our relationships are as blood relatives, clan relatives, friends and acquaintances,” he said.

The songs and the heartfelt words that people spoke at the powwow also had a special resonance this year, he said.

“Yes, the competition is always there and people came with aspirations to win, but more so they weren’t actually there to compete,” said Shebala.

“Just the feeling of the songs,” he said, “being able to step out onto the floor, able to dance to the beat, was the greatest feeling.”

Salabiye said now, in the wake of the pandemic, the word “resiliency” has even more meaning.

“At the onset of the pandemic, it was really scary because we were losing a lot of people,” he said. “People were staying home and being very cautious.”

With the help of Western medicine, vaccinations and the strong Navajo public health response, Diné rallied against COVID-19, he said, much like generations before overcame illness and hardship.

“It’s a community – we’ve been able to come out of our shelters, get back to Mother Earth and fellowship and celebrate being victorious over the latest enemy, COVID-19,” said Salabiye.
“It’s a celebration of survival, again,” he said. 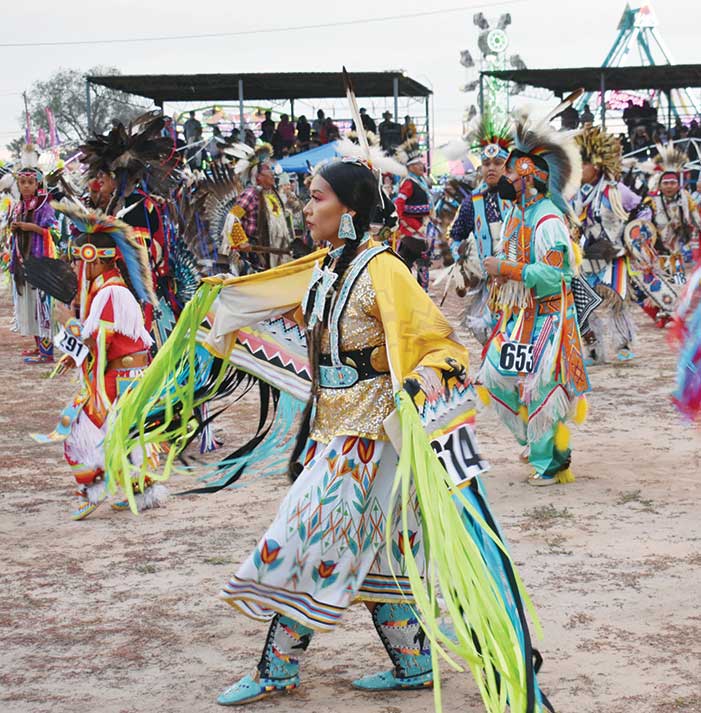 Looking back to when ceremonies stopped in 2020 due to COVID-19 safety concerns, Salabiye said individuals and households had to resort to looking to themselves and their own faith, belief and prayers because they couldn’t visit with healers.

“They had to say, ‘What do I have inside myself?’” he said. “I think every household upped their level of spirituality and prayer in however way they believe and practice.”

He said after the pandemic, the power of traditions, songs and dances in healing are appreciated even more.

“We all took it for granted, not realizing how much we’d miss it,” he said. “Hopefully that realization sticks so that we will take better care of it and we will be more humbled by illnesses like Covid that we can’t control.”

Salabiye said. “If we’re going to survive for the next hundred years, it’s up to all of us to have a purpose and learn for the future.”

With many tribes losing their language and traditional ways, Salabiye said the inclusiveness of the powwow circle provides many Native Americans an avenue to carry on their traditions.
“Powwow is pan-Indian,” he said. “A lot of people come and discover something they can identify with to maintain Native culture.

“They have pride that they are Indigenous people,” he said, “the original inhabitants of this land.”

Newly crowned Navajo Nation Fair Powwow Princess Viviana Toya described herself being up for the task of carrying on time-honored traditions of her royalty duties.

“I’m honored to be representing the Navajo Nation and to be on this journey,” said the 16-year-old Gallup High junior, who is also earning her associates in science at McKinley Academy.

Toya said she’s used to travelling to powwows so the Navajo Nation Powwow princess win is just an extension of what she has already been doing for years.

“My family has been going to powwows for generations and generations,” she said. “I will do my best to fulfill these duties as a princess.”

Toya, who is Kiowa, Pecos and Kewa Pueblo said she’s been dancing since she could walk.

“I’ve been in the powwow circle ever since I was born,” said Toya. “Even when I was in my mom’s womb, she was dancing with me in there.”

Her mother, Tamara Toya-Begay, is a well-known Northern traditional dancer.

Toya competed against two other contestants for the powwow princess title, which involved submitting a biography, an essay and showcasing their dancing styles, which for her were fancy shawl, jingle dress and Southern traditional.

“She’s going to be an excellent ambassador for our Navajo Nation Fair Powwow,” said Salabiye. “She comes from generations of very well-known powwow people.”

At a young age, Toya is already a champion dancer, he said, and has many other interests she’s pursuing.

“She’s very tough, well-travelled and has enormous experience in other arenas across the United States and Canada,” said Salabiye.

For other young people who are interested in joining the powwow circle, Toya encourages, “Just do it.

“It’s great to embrace and learn your culture,” she said.

“It’s very fun and educational because I get to see friends and family, and experience new cultures,” said Toya. “I get to do the things that I love to do the most.”