Slow down and take your time when covering Native news was the primary message Miss Navajo Nation and a panel of Native journalists advised a roomful of writers and reporters at the 2022 New Mexico Press Women conference.

Niagara Rockbridge, Miss Navajo Nation 2021-22, was the featured speaker on Saturday evening of the conference held on March 11 and 12. 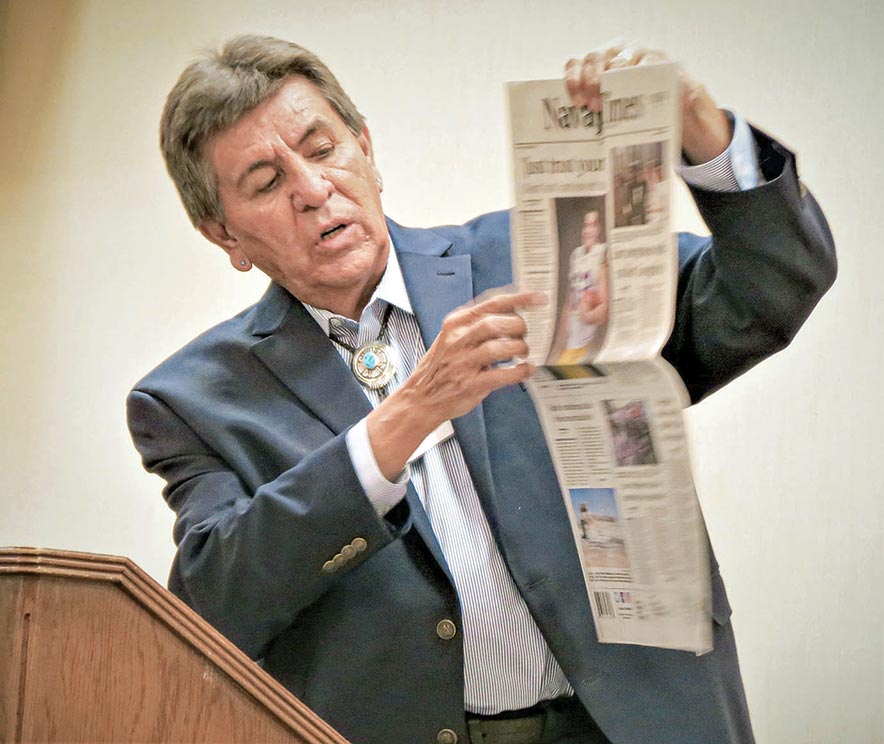 She’s from the Piñon/Cottonwood community about an hour west of Chinle.

“That’s where my footsteps started as a young child, raised in a hogan by my grandmother,” she said.

She arrived for the conference hours earlier than expected to sit, chat, and get to know the attendees from all parts of the state to participate in this year’s conference titled, “Listening to Native American voices, past and present.”

“The most important thing for non-Natives coming into Navajo communities is really having that sense of respect for the people and wanting to know who they are and where they came from,” Rockbridge said.

“Through that understanding, you can better write and develop your stories having a deeper connection to (the people and the community),” she said.

Sherry Robinson, a former reporter for the Gallup Independent found that taking her time improved her newsgathering and storytelling.

“Anglos don’t realize this, but we come on too strong,” Strong said. “We are always in a hurry. We are loud and expect answers just like that. To Native people, that’s rude.

“I had to mentally calm down and approach them (slowly), instead of barraging them with questions,” she said. “It would be a long interview, but I learned later on that could work in a lot of situations. It was a good lesson.” 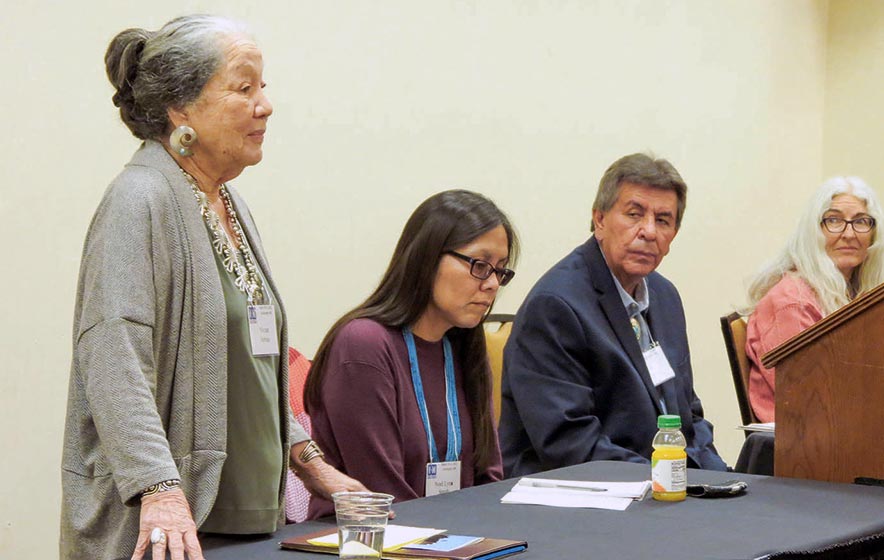 “This panel is going to share some stories, tips, and resources with you so that when you go out to Indian Country and do some writing about Native communities, there are some things to be aware of,” said Arviso, the moderator of the morning session.

When asked how she built trust to cover stories in Native communities, Yurth, whose home is in Chinle, said it helped that she lives in a tribal community.
“I volunteer a lot, and I am an official band mom,” she said.

Her husband is the band teacher at Chinle High.

“People get to know you when you are there for the long haul, and I always try to do a good job and be objective,” Yurth said. “If you are a good journalist, people will start trusting you.”

Tom Arviso said, “She was tested early on by the Navajos, but she always got at the truth. She could do journalism that makes a difference and helps people learn what is really going on in the community.”

Yurth worked for the Navajo Times for 17 years as a reporter, assistant editor, and editor.

Smith worked for the Navajo Times before reporting for the Farmington Daily Times. She said if you want to get a story to become a familiar face.

“Familiarize yourself with the people,” she said. “Let them know (who you are). Get to know them as a person.”

Besides how they gained trust, Yurth and Smith shared reporting experiences. Smith talked about covering the Navajo Nation government and politics.

“I appreciate your work. I’m glad you are there,” said one attendee who reads the Daily Times every day and always looks for Smith’s stories.

Yurth talked about some of her favorite stories, like when she rock-climbed and waded through running water to discover a hidden apple orchard deep in Canyon de Chelly.

“That’s the best part of it,” she said, “you get to find these treasures.”

Vivian Arviso, an educational consultant who worked in several Navajo administrations during her remarkable career, gave insight into the evolution of the Navajo Times, which was founded in 1959 and became an independent entity separate from the government.

“Vivian is one of our strongest advocates for freedom of the press,” publisher Arviso said, adding that the Navajo Times is the only fully owned and operated Native American newspaper publishing company in the country.

“The newspaper plays a very important role to help the public,” Vivian Arviso said. “It also helps leadership to learn where things are going.”

Speaking in Navajo and English, Rockbridge shared what it was like to compete for the royal title.

“(The competition) tests the whole woman,” she said. “It tests your true knowledge of your family lineage and heritage.”

Pointing to the silver buttons on her sash, she explained that they represent competition categories, including best butcher, best food, best essay, Miss Photogenic, and Miss Congeniality. Rockbridge placed highest in four out of five, giving her the most points.

Wearing the signature silver crown and traditional attire representing the foundation of Navajo culture and beliefs, Rockbridge looked out at the attentive audience.

“So, this crown is not just a crown to look pretty,” she said. “It represents the female holy deities – White Shell Woman, Changing Woman, and Spider Woman.

“I wear this crown for my Navajo people and all of you because these holy deities are actual examples of a mother, grandmother, an auntie, a friend,” she said. “(Like the holy people), Miss Navajo Nation is all of these people.”

In her role as Miss Navajo Nation, she wants to bring more attention to issues impacting Native people.

Addressing the ongoing tragedy of missing and murdered indigenous women, Rockbridge pointed out that one out of three Native women is targeted across North America.

“It is a real danger!” she stressed, encouraging women to protect themselves and take self-defense classes.

Wrapping up her comments, Rockbridge had final words of encouragement for the group, including men and women.

“The last thing I will tell you by way of encouragement was told (to me) by my grandmother,” she said. “Whatever you work towards, you will accomplish. The only things that you put work into will come to life.

“Go out there and experience Native communities, so you get first-hand knowledge,” she said, adding to take time and be respectful.

“There are many stories out there to be told,” she said.