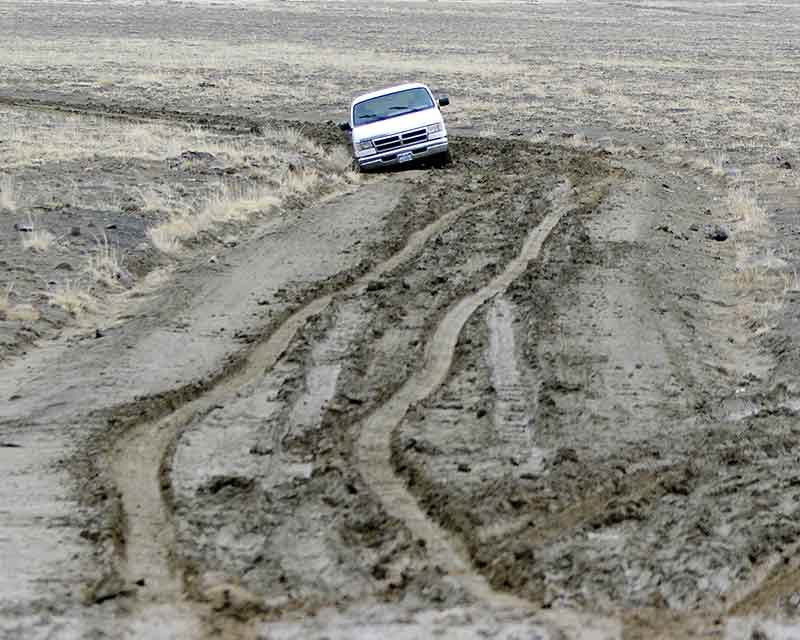 A van sits stuck in the mud about 500 feet from U.S. Highway 491 on Monday afternoon north of Naschitti, N.M. Recent storms that has been bringing much needed moisture to the area has caught some folks living on the reservation off guard. (Times photo - Donovan Quintero)

A van sits stuck in the mud about 500 feet from U.S. Highway 491 on Monday afternoon north of Naschitti, N.M. Recent storms that has been bringing much needed moisture to the area has caught some folks living on the reservation off guard. (Times photo – Donovan Quintero)

In his Chevy truck with chains on the tires, Allen Bryant parked along side New Mexico State Highway 164 waiting for his grandson to arrive on the school bus.

The 58-year-old from Sagebrush Valley, N.M., which is a hamlet in the middle of the Chooshgai Mountains, says the conditions where he lives are “mud, snow and water.”

The turnoff where he drops off and picks up his grandson – twice per day at 6:16 a.m. and 4 p.m. – is five miles west of Sheep Springs Chapter and another 3.7 miles off the highway.

“More water will be great without the muddy roads,” said Bryant, who lives in Sagebrush Valley year-round. “We really do need it.”

He added that his neighbors – Roy and Lewis Benally – live further up in the mountains and from what he knows, they’re staying put as evidenced by the lack of any tire tracks.

In addition, the Silversmiths and Denetclaw families, who also live up in the mountains, aren’t going anywhere either.
“I saw a person going up there when I was coming down,” Bryant said about members of the Naschitti ALERT.

Bryant explained that the road conditions are extreme, noting that without four-wheel drive or chains his truck would sink into the muddy, watery conditions.

The families mentioned by Bryant are just a few of a possible several hundred across the Navajo Nation to be stranded by muddy roads after a storm dumped up to two feet of snow in the higher elevations over the weekend, followed by above-freezing temperatures and rain.

Other chapters that have declared a state of emergency include Chilchinbeto, Shonto and Coppermine, all of which are in Western Navajo Agency.

In Tse AlNaoztii, one of the hardest-hit chapters, six to seven high-risk families that have had no communication with the chapter officials and are still being investigated for possible rescue.

The other hard-hit area was Western Agency, whose broad expanses, lack of pavement and scattered population were making relief efforts a nightmare.

Kayenta Chapter Administrative Assistant Mariah Cly described conditions Wednesday as “still pretty bad,” although she said a collaborative effort between the school district, Navajo County and the Navajo Department of Transportation resulted in the major dirt routes being “somewhat taken care of.”

Monument Valley schools have only been open one full day — last Thursday — in the past two weeks, and other school districts on Western Navajos have decided to call school off for the rest of the week.

Utah school systems in Bluff, Montezuma Creek, and Tsébiindzisgaii are among those that have suspended all activities and classes through Friday, March 6.

All other schools such in the San Juan School District, however, are on their regular schedule.

Shonto Preparatory School and the Tuba City Unified School District on Monday closed their schools due to the road conditions as well.

In Flagstaff, cleanup is now underway after the winter storm brought 7 inches to the area. Streets along downtown were lined with piles of snow as crews worked March 3 to clear sidewalks and streets.

Classes were back in session for Northern Arizona University students on Tuesday after the campus closed at 2 p.m. on Monday due to worsening storm conditions.

In Lake Powell Country, the sun managed to peek through the clouds throughout the storm and helped the melting process, but rainfall added to the mess around the Kaibeto and Ts’ah Bii Kin areas.

The sun was out Wednesday across most of the Navajo Nation but calls were still coming in at the emergency operations center set up by the Department of Emergency Management, a DEM employee said, with several chapters working on their state of emergency declarations.

Residents in Chinle reported a series of brief power outages Saturday, and Chinle Unified School District closed its schools Monday, Tuesday and Wednesday, although the BIE elementary and high school in Many Farms remained open.
As much havoc as the storm caused, however, it didn’t make a dent in the ongoing drought.

The storm was also spotty, with the Chuskas faring far better than the Defiance Plateau. In the Chuskas, March is already the wettest month so far this year, with the equivalent of about three-and-a-half inches of moisture. Farther south, where the storm just grazed the mountains, March is so far the driest month, with only about a half-inch.