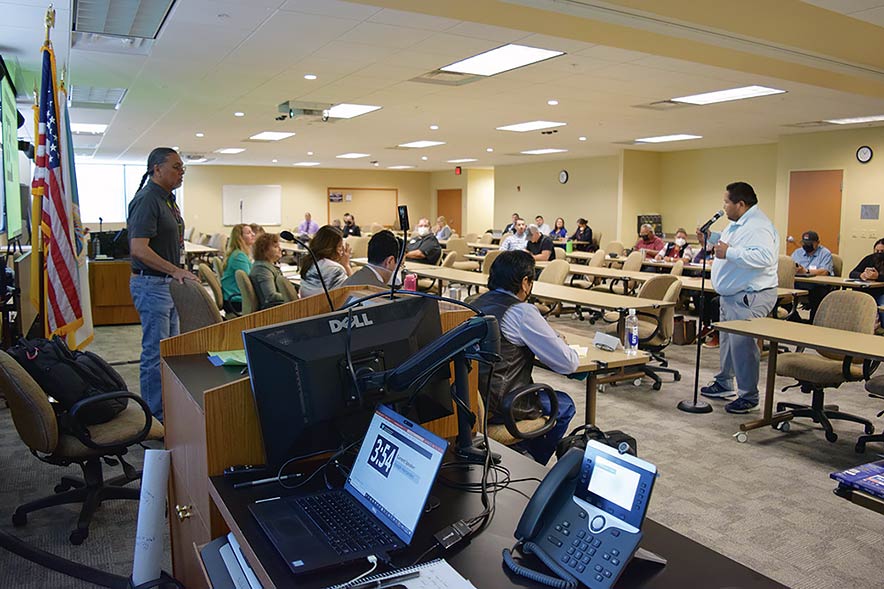 Special to the Times | Diane Joy Schmidt
Joseph Hernandez, from Shiprock, a NAVA Education Project energy representative, on April 29 speaks to the panel during the final Chaco Canyon withdrawal listening session held by the Bureau of Land Management.

A 10-mile buffer zone is proposed for new extractive leases around Chaco Canyon, but the problem is, it won’t ban existing drilling, for which communities never had any say to begin with.

Comments can still be made through May 6 (see below).

While initially the Navajo Nation Council was supportive of the 10-mile proposal, they then voted to oppose.

Despite their opposition on the one hand, and the public outcry for years by Native groups and environmentalists, it is dispiriting how little the withdrawal will actually accomplish.

Mark Armao, Indigenous affairs fellow for environmental publication Grist.org, reported on Feb. 17, “In Chaco Canyon, a moratorium on oil and gas leases might be too little too late.”

Armao points out that “companies with existing leases” within the proposed 10-mile withdrawal buffer zone “can continue to extract minerals within its boundaries,” so it is a “superficial fix.”

While the plan will prevent new leasing, data provided to Grist by the BLM shows there are already 310 active wells on 88 active federal leases.

Carol Davis, director of Dine CARE, a Navajo-led environmental group, said, “There’s still going to be development going on in that 10-mile buffer, and there’s nothing to prohibit that.”
The Biden administration, while promising to limit development, has recently bowed to pressures to allow more fossil energy extraction.

As announced on April 16 (NPR-Colorado), “The Interior Department on Friday said it’s moving forward with the first onshore sales of public oil and natural gas drilling leases under President Joe Biden… A federal judge in Louisiana ordered the sales to resume, saying Interior officials had offered no ‘rational explanation’ for canceling them.”

George Werito, president of Ojo Encino Chapter and the Tri-chapter Alliance, which includes Counselor, Ojo Encino, and Torreon, has called for years for attention from the federal government to the effects of the active drilling on communities next to Chaco.

Werito said that he supported the Chaco withdrawal, but he wanted to confront problems already caused by drilling.

He pointed out that the drilling may benefit some individual allottees there, but not the community.

“I’m against more drilling,” he said. “Things are really booming in my area. They don’t actually consult the community. Most of the work is being done (with approvals) by the BLM.”
Werito also laid blame on Window Rock.

“Roads are the big issue,” he said. “Every day where we have school bus routes, the oil field trucks are speeding. They take over, they don’t respect rights of ways.

“How are you going to help us?” he asked. “Allottees are getting money off the royalties, money goes to the state and federal, but as a community, no.”

Noting the deliberate way the land was broken up into checkerboard areas to weaken Native control, he said, “There is trust land, fee land, BLM, state, Indian allotments.”

“You have to be there to understand the situation,” he said. “We need to be treated better. If you’re going to drill, can I get water, new roads, build us some infrastructure?”

The roads, which have never been good, have become pitted with dangerous potholes from the heavy trucks using them.

Speakers supported the proposed Chaco buffer, but the irony of the situation was not lost on them and many said more must be done.

Doreen Bird, Santo Domingo Pueblo, a Ph.D. with a master’s in public health, said, “The land calls us as matriarchs, as people to come speak for it, because it’s not given the opportunity to speak words, though the climate issues that we’re having—that’s one way that our land is able to speak up for itself.

“But (here) we need to use English words, we need to use documents, things like the Constitution,” she said. “But that’s not always appropriate for us as Indigenous people.

“I don’t give consent,” she said. “Neither do my children, or my family, we don’t give consent for any extractive industry. We’re here to say no, no more. And this is only the beginning. The 10-mile radius does the very bare minimum.”

“Follow the leadership of our governors,” she said, “because they really are thinking about seven generations down the line, not just for our communities, but non-indigenous folks as well, having that birthright to clean water, clean air and clean soil.”

Joseph Hernandez, Navajo from Shiprock, a NAVA Education Project energy representative, said, “We’re asking that we keep what’s in the ground, keep it in the ground.

“We’re asking that we allow our relatives there to continue their traditional culture, traditional practice of harvesting the medicine in the area,” he said. “And this is a complex issue. It’s complicated on every hand, because my relatives were chased out of the park when the park was established.

“And because of that historical trauma, our Navajo elders have a hard time taking your word, the federal government,” he said. I’m just thinking about the next generation, about the grandkids. That’s why I’m here. Ahéhee’.”

Friday May 6, is the last day comments can be entered in the federal record for the Chaco Canyon withdrawal.