‘The people’s president’ Kelsey Begaye is honored with tears, tributes 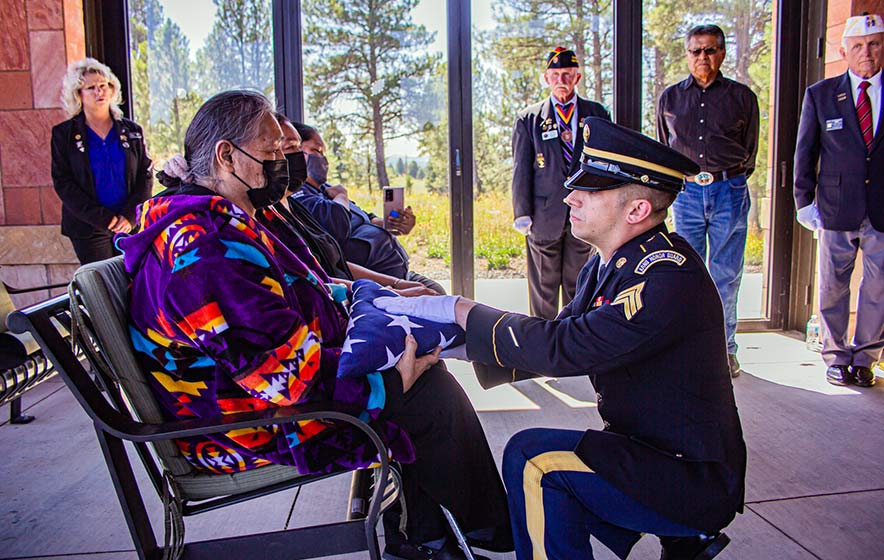 Navajo Times | Cyrus Norcross
Marie Begaye is presented with the American flag after it was folded 13 times at the Arizona Veterans Memorial Cemetary at Bellemont, Ariz.

Former Navajo Nation President Kelsey A. Begaye was remembered Friday at a memorial service that evoked the Vietnam veteran’s unbreakable will, the father and grandfather and the leader devoted to his people.

Begaye served as the fifth president of the Navajo Nation from 1999 to 2003.

The late president was buried Tuesday at the Arizona Veterans Memorial Cemetery at Camp Navajo in Bellemont, Arizona, ending four days of honoring the man who knew hardship, disappointment, sacrifice, and moments of contentment.

Begaye was born and raised in Kaibeto, Arizona. He had two brothers and four sisters. 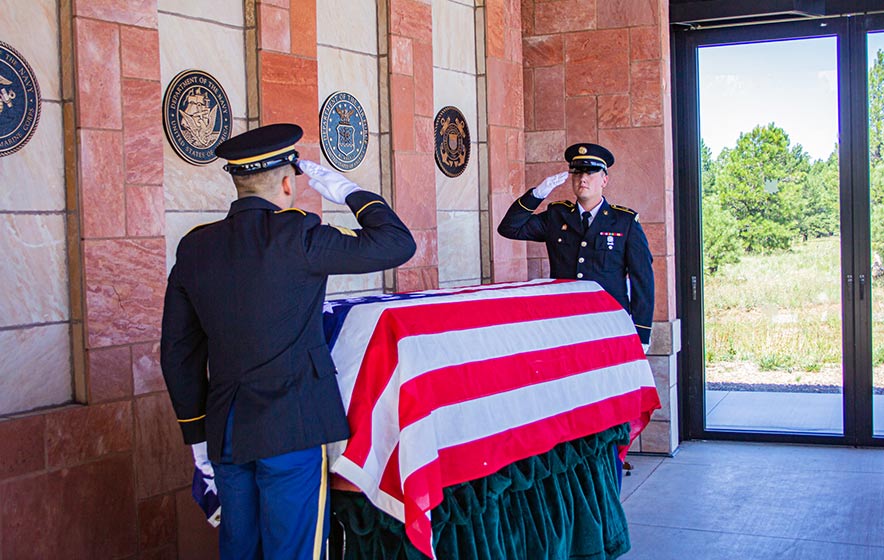 “My father, Kelsey Begaye, overcame many obstacles and struggles during his life’s journey,” said Begaye’s eldest daughter, Kellie. “And this is just part of his story.

“My father was working on a book that he started in August 1990, so a lot of what I have to share with you is from his own writings,” Kellie said. “He’s always wanted to put together a book.”

That book though, his autobiography, was never finished.

Kellie said her father had the time of his life when he was growing up and herding sheep in K’ai’bii’tó. He was the happiest when he was in seclusion.

“To think that a young child who was happiest in solitude would one day become one of the most public figures in the Navajo Nation,” Kellie said. “‘The people’s president,’ they called him. And his presidency was completely committed to the people, especially the youth.

“School children would cheer at the side of my father, hugging him and giggling,” Kellie said. “He signed autographs until his pen ran dry. He had a soft spot for the youth, for the next generation.”

Kellie said her father understood that young people are inclined to follow desires and to succumb to appetites and passions such as substance abuse, trying to overcome addiction, and relapsing.

Begaye attended Kaibeto Boarding School in 1958, during which he bought bags of popcorn for 25 cents, including candy, soda and a pack of gum.

“He always talked about how Christmas time was fun because he received gifts and candy,” Kellie said. “And during school breaks, my father and his younger brother, Jerry, would herd sheep and hunt rabbits.

“He recalled some of his memories in boarding school – standing in line for meals, holding hands with girls into the dining room and pulling out chairs for the girls to sit down, pulling girls’ hair … putting lizards in the teachers’ desk, singing Christmas carols, and learning to square dance,” Kellie said.

Begaye was herding sheep one day in 1963 when he decided to take a break and went to the trading post for some goodies. He ran into two of his cousins who were waiting for a bus ride to school in Albuquerque.

He decided on a whim that he’s going to get on the bus too and got in.

“I’ll always remember what my mother and uncle Ray Martin used to tell me about going out on our own and leading the world,” Begaye wrote for his autobiography. “They told me that someday I’d be on my own and I can’t always look to my mother or other relatives.

“Being independent would allow me to accomplish my past and fulfill my obligations to God,” he wrote.

Kellie said her father made friends quickly at school where he blended in with the other students. He was also part of a “border town” boxing club where he earned the nickname, “Choo-choo,” for his boxing talent.

Begaye attended Monument Valley High in Tódinéeshzhee’ and graduated in 1969. This is where he began experiencing alcohol, said Kellie.

“My father would sneak sips of alcohol from the school locker,” Kellie said, adding that he was placed on academic probation at one time.

“Just as herding sheep helped him escape as a child,” she said, “alcohol became an escape from some of the negative experiences from his childhood.”

Kellie said her father didn’t go to college after high school, preferring instead to enlist in the U.S. Army. He served in Vietnam.

“It is no surprise that my father experimented with drugs during this time,” she said. “Drugs were everywhere. Heroin was plentiful and so were opiates.

“Despite the work that my father had to manage communication as a soldier, he was devoted to an entry-level private,” she said. “Stresses of war and drugs dominated my father’s life for around 13 months. But just as my father left one battle, he entered a new one at home.”

Begaye turned down a re-enlistment bonus and didn’t return to Vietnam and moved to Los Angeles where he lived with his sisters and worked on different jobs.

“At the same time, my father’s alcohol had worsened,” Kellie said. “His self-destructive behaviors continued for months. It would not be long before he was homeless (in Skid Row, a neighborhood in downtown Los Angeles).

“He would get by with the help of churches, shelters, his sisters, and park benches,” she said.

Kellie added, “In my father’s words, he was ‘a mess.’ After living the homeless life in California for two years, he returned home to Kaibeto, Arizona.”

Unfortunately, he fell into the routine of crime, court, and jail. He returned to Los Angeles where he was homeless again for two more years.

“Recognizing his life was at a standstill, he traveled (home) one last time to seek the help of his relatives,” Kellie said.

At home, he spent more time “partying” with friends in the park in Page, Arizona, where police officers would arrest him and take him to the drunk tank to sober up.

One day, his friends dared him to sell a watch to a particular woman.

That woman was Marie, who didn’t buy his watch because she knew he’d use the money to buy more alcohol. Marie offered to buy him a meal and Begaye declined. 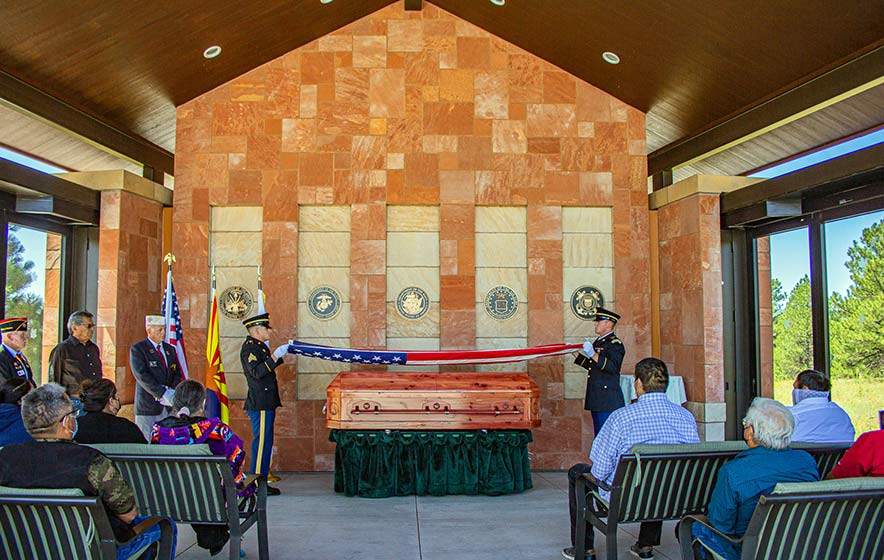 Navajo Times | Cyrus Norcross
The U.S. Army Honor Guard folds the America flag into a triangle on Aug. 24 at the Arizona Veterans Memorial Cemetery at Bellemont, Ariz. The folding of the flag represents American values and honoring the dead.

Begaye one day was hitchhiking when a car pulled up. The driver was the woman who had declined to buy his watch. The two began dating and the rest is history, said Kellie.

Begaye and Marie have 18 grandchildren and three great-grandchildren. They were married for 45 years.

“He later told (us), ‘It doesn’t matter how much you fall down; you get back up and dust yourself off,’” Kellie said.

“In 1999, my father became the fifth president of the Navajo Nation alongside the late Dr. Taylor McKenzie,” Kellie said. “Among many other accomplishments, he secured funding to establish a Boys and Girls Club. He worked to modernize Navajo communities and (bring) broadband access.

“He signed a treaty with the San Juan Southern Paiute Tribe … for a land conflict,” she said. “His presidency was a shining point in his life and the story to get there came with a story of ups and downs.”

Begaye was elected to the Navajo Nation Council, representing Kaibeto Chapter in 1991. Then he was elected as speaker of the Council in 1996. He served two terms.

He ran for tribal president at the advice of the late Buster Nez Sr. from Kaibeto.

Begaye in July 2011 was given an honorary doctorate degree from the United Graduate College and Seminary in North Carolina, for his national advocacy in education and health.

Kellie said her father was someone who was caring, compassionate, kind, and gentle.

She said her father always said his positives outgrew his negatives.