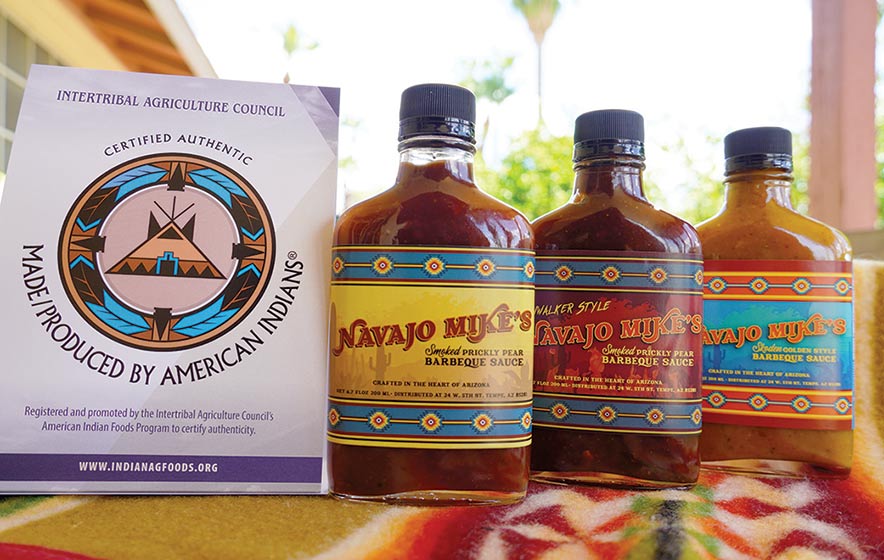 Courtesy photo
Navajo Mike’s barbecue sauces are shown next to his certification card for being a business whose products are produced by American Indians, awarded by the Intertribal Agriculture Council.

After waiting little more than a week, Michael John opened his email and saw for the first time his dream taking focus – a bottle label designed for Navajo Mike’s BBQ sauce.

John, a Tempe-based Diné chef, started Navajo Mike’s in 2020 due to the COVID-19 pandemic and its impact on the restaurant industry and its employees.

“During the pandemic, pretty much I didn’t have a job, so I just thought, ‘Why don’t we make some barbecue sauce?’” said John.

Before the pandemic and during the early weeks of it, John was executive chef at Sunbar in Tempe.

With measures taken by restaurants across the country to either close or switch to pick-up-only, John found 15 years of industry experience uprooted in a matter of days.

He now had the time to take his kitchen skills in a more personal direction.

“I always talked about it, one of the spots that I worked at, I would jokingly say, ‘One of these days I’m going to make a barbecue sauce or something,’” he said. “It was always just joking around and talking with other employees.”

Then the pandemic struck and everything was shut down.

It took John about two batches to figure out what he wanted the barbecue sauce to taste like – and be about.

Centered on the prickly pear of the Southwest, John chose both the vegetable and fruit as a start to the recipe and flavor of Navajo Mike’s.

He handles everything from crafting the sauce to bottling it.

“Right now, the kitchen I’m in, the owner is letting me use his kitchen when it’s down or closed,” he said. “I do all the stuff there. I bottle it, pick up the labels, label it – it’s just a one-man show right now.”

Navajo Mike’s offers three sauces: the original style Smoked Prickly Pear and “Skinwalker Style,” a hotter version, and “Skoden Style,” with no prickly pear but a mustard and honey combination.

Starting a business was another new challenge for John and he had to figure out on the go.

“Being a first-time business owner, I didn’t know marketing or where to even start with any of this,” he said. “I just made a website and was just like, OK, let’s see for 10 dollars. Now I got it down to seven dollars per bottle.”

In the first few months, John donated part of his profits to the Navajo Nation COVID Relief Fund.

“For a month, for every bottle I would donate 10 percent of sales to a nonprofit up there (Navajo Nation) to help the COVID relief,” he said. “I think I got like $60 worth of sales and I just ended up sending them $100.”

John wants to continue this tradition of donating a percentage of sales to nonprofits to benefit Four Corners region people. Before moving to a monthly donation basis, he first wants to take care of himself and his family.

“I filled out their application, they needed the proof of Indian blood, I sent proof of that certificate in,” he said. “It was like a week or two and I got this email that said, ‘Congratulations! You are certified made/produced by American Indians,’” said John.

“They sent me this gift box with a bunch of stuff and this official seal that I can put on my bottles now,” he said. “It was really cool they had that.”

In the future, John hopes to explore hot sauces, festivals and possibly a food truck or distribution center in the Window Rock/St. Michaels area where his family is from.

John is currently back at Sunbar full-time as an executive chef and operates Navajo Mike’s on his off time. He urges other Natives in the industry who are thinking of opening their own food business to take that personal journey.

“Just jump for it,” he said. “That’s the thing. Sacrifice time to get your business going and do something. It’s worth it.”

You can find Navajo Mike’s barbecue sauce on the official website.