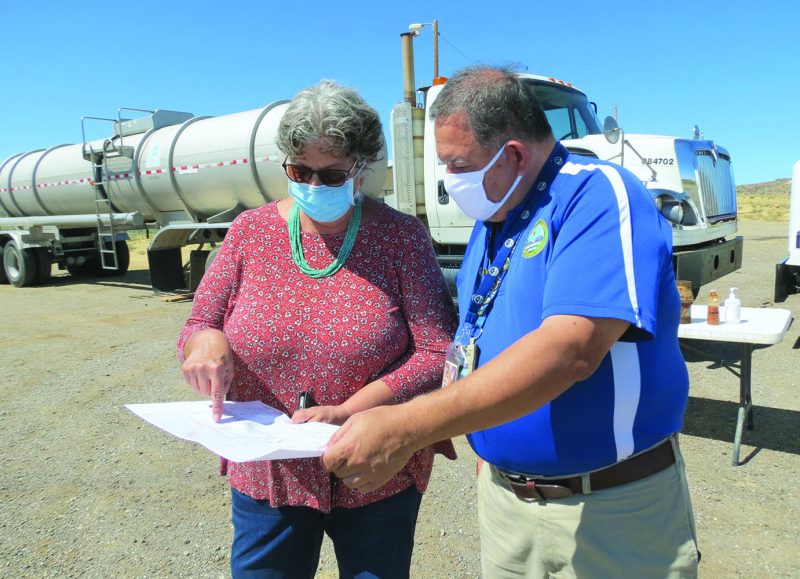 On July 29, New Mexico Rep. Harry Garcia, D-Grants, who doubles as a truck driver, drove a wide-framed truck loaded with 2,500 one-gallon bottles of water and parked it behind a city/county tanker truck near the Tohajiilee Chapter House where a loudspeaker and mic was set up for a press conference.

Bernalillo County Commissioner Debbie O’Malley (District 1) organized the press conference with chapter President Mark Begay, as part of a call to action to bring national attention to the water crises at To’hajiilee. To’hajiilee is located about 24 miles west of Albuquerque.

“The wells that supply clean water to To’hajiilee have all but dried up,” O’Malley wrote in an online call to action. “All clean drinking water for all households, (the clinic and school) must be shipped in. There’s no question, this a humanitarian crisis.”

“Two years ago, we started having trouble with our well No. 5,” Begay said. “If that well goes out, everything shuts down,” said Begay.

Besides the local water well breaking down intermittently, community member Leela Platero said the quality of water is unacceptable. “These are Third World conditions here,” she said. “Most people don’t drink the water. It smells worse than rotten eggs.” Platero is especially concerned for her great-grandchildren and all the children in the community.

Helen Johnson, a teaching assistant at the To’Hajiilee Community School, also expressed concern for the younger generation. “We are in dire need for water,” she said.

Pointing to the trucks behind him holding tons of water for the community, Garcia said, “This is a Band-Aid (approach).” He stressed that everyone needs to support To’hajiilee in its efforts to secure the long-term solution of a water pipeline connecting To’hajiilee to the Albuquerque water system.

“Fortunately, the Navajo Nation has water it can convey to To’hajiilee. It’s just a matter of building 7.4 miles of pipeline from Albuquerque,” Begay said. But the proposed pipeline plan has been stalled for two years because the asset managers for an Albuquerque westside development have repeatedly dodged requests to negotiate terms for an easement through their property.

Jeff Garrett and Mathew Look of the Garrett Development Corporation of Arizona represent Western Albuquerque Land Holdings, or WALH. The July 9 Navajo Times story “To’hajiilee’s fresh water blocked – county steps in,” tells how Begay and project engineer George Mihalik from Souder, Miller and Associates, have been trying to get Garrett and Look to come to the table to negotiate before and during the ongoing COVID-19 pandemic. The call for action also aims to put pressure on financiers of the sprawling westside development, one of which is the British bank, Barclays.

“It’s for the world to see there is a need here,” stated Henio, as he addressed members of the community and the press. Henio added that the Navajo Nation Council is doing its part. He reported that $8 million for the Albuquerque/To’hajiilee water connection has been included in the Navajo Nation’s CARES Act budget. The budget is pending approval by President Jonathan Nez.

Calling out Barclay’s Bank, Shendo pointed out, “As a bank, you have bottom lines. Here we are talking about lives. That’s (our) bottom line. Our families can’t turn on the water like folks in the city.”

Preston Sanchez, Jemez/Laguna and Diné, an attorney who works on indigenous justice issues for the ACLU, attended the press event. “This is clearly an issue that is oppressive and is racial discrimination against indigenous people in New Mexico,” he said in a phone call with the Times after the event. Sanchez said it would benefit the company if they acted like a good neighbor and came to the table to negotiate. “If they don’t act soon, the label of being a corporation that is racially discriminatory is going to have an impact on their business,” he said.

In an editorial in the June 10, 2015, issue of Albuquerque Business First, Jeff Garrett described the expansive WALH development. “From just about anywhere in our city (looking west from Albuquerque) you can see WALH’s property, it is on either side of I-40 beginning around Unser and continuing to where it crosses over the horizon … 55,000 acres for future growth and economic development opportunities,” he stated.

While Garrett promotes how WAHL is advancing urban growth, O’Malley pointed out that WAHL has benefited from numerous state and county resources – for example: planning, zoning, tax breaks, entitlements and road improvements.

“I (am) so angry, especially that they have benefitted from how much we have done and this is the way they are acting. That is not right,” she said expressing concern for her constituents. “It can only be corporate greed on the part of WAHL that is driving their decision to deny their neighbor access to water. How can a person think otherwise?” she added in the online call for action. O’Malley stressed that she will continue to encourage groups and individuals to pressure the GDC and financiers like Barclays Bank to come to the table to negotiate. Sanchez said, “The awareness needs to be brought to a national level so it spreads the name of this company that ought to be avoided (by those businesses and individuals) who take any kind of a stand against racial discrimination.”

Word about the blocked water pipeline reached U.S. Senator Martin Heinrich, D-N.M. “I find it unconscionable that Western Albuquerque Land Holdings and Garrett Development Corporation have been unwilling to come to the negotiating table to help the To’hajiilee Chapter secure access to clean water,” Heinrich said. This is truly a humanitarian crisis and we need a solution immediately.” Johnson holds out hope that the Garrett group and Barclays Bank will respond positively.

Platero said, “We hope something gets done for our community and our people. We have to have good water, clean water. That is my hope and that is what I am praying for.”

The 2,500 gallons of water was provided by the Homestake Mining Company. Bernalillo County has started the process of condemnation and will proceed if WALH representatives don’t respond to requests for negotiation. Phone calls from the Times to the GDC were not returned. Information: Commissioner O’Malley on Facebook and Barclays.co.uk, gdc-az.com, aclu-nm.org.