Traffic stop on I-40 finds 2 with stolen tribal property 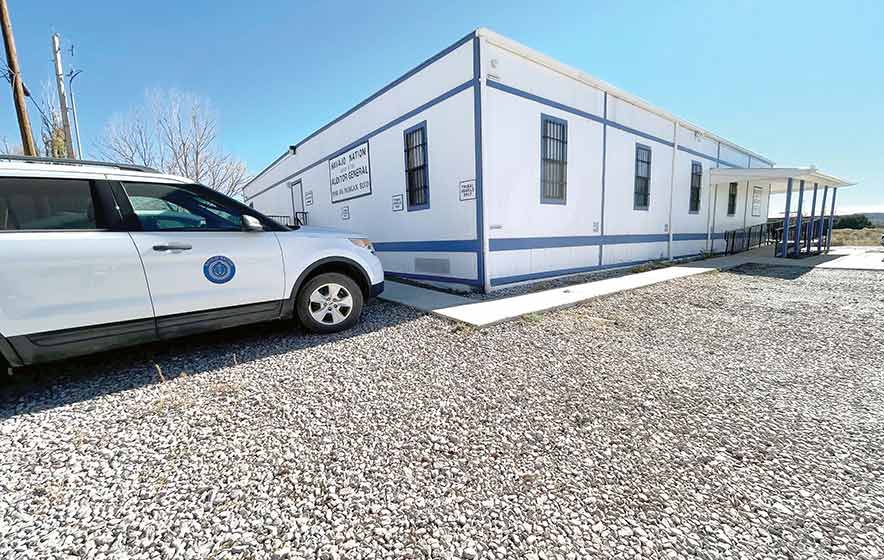 A man and woman were arrested by Arizona DPS officers on I-40 on Sunday and electronic equipment was found bearing Navajo Nation property information.

The arrest of the two was unrelated to a break-in and robbery that occurred last weekend at a modular building housing offices for the auditor general and Navajo Government Development.

From photographs of the items found, Navajo Police determined they were the property of the Navajo auditor general, said Christina Tsosie, public information officer for the Navajo Police.

Tribal charges against the two are pending.

While the official police report on the robbery is not yet available, on Monday the speaker’s office confirmed that there was a break-in and theft that occurred last weekend.

“The building was fairly damaged,” Communications Director Alray Nelson said Monday afternoon. “My understanding from the Navajo Police was that the front door was pried open and several doors throughout the building were also vandalized.”

Laptops and other equipment were taken and the alleged thieves also helped themselves to employee’s food, which was left out, he said.

Nelson said according to staffers the majority of their cubicles were also “trashed up.”

Nelson said Speaker Seth Damon, who oversees the offices as head of the legislative branch, did not yet wish to comment on the incident until after he had a chance to read the police report when it is released.

“It’s an ongoing investigation, because I know there were several questions around what documents were taken and what’s on the laptops of these employees,” said Nelson. “We don’t have that information right now.”

As his spokesperson, Nelson indicated that Damon is concerned over whether sensitive information is on the laptops that were taken.

“The main thing is that we’re going to continue to cooperate with the Office of Criminal Investigations that’s already been involved now since Sunday with the officers that were on duty that day,” said Nelson. “Right now, there’s no complete report of what information was taken and what laptops were taken as well.”

Nelson said that naturally staffers had expressed concerns over their safety and sought approval from the speaker’s office to take the day off on Monday.

He said he thought the speaker’s office had hired a cleaning company to come in on Tuesday to “disinfect the whole location.”

“From my understanding, the staff from Government Development and the Auditor General workers, they are all going to be on leave for the next two days as the cleaning process happens,” said Nelson. “The expectation is that the staff will be able to return to their offices on Wednesday.”

DuWayne Crank, delegated director of Government Development, told Navajo Times that he was still in the office on Monday afternoon helping to assess damage to the office and inventory office equipment.

“Since this is an ongoing investigation, I can say that, yes, the Offices of the Auditor and Government Development were broken into and items were taken from our office and portions of the office were vandalized,” said Crank. “They did leave the office in disarray with papers here and there.”

He said he wasn’t sure exactly what time the break-in occurred but it was some time over the weekend.

“Right now, we are on administrative leave for today while we are looking into damages and working with Maintenance and Risk Management for insurance purposes,” he said. “We have to make sure we account for everything so that’s what we’re doing now.”

Nelson said that when it is released, the police report should have more details from the officers who were there.

In the meantime, Nelson said he’s just on standby until he gets more information from the “higher ups.”

Crank indicated that his office did have security protections on the laptops that were taken, but he couldn’t speak for the auditor general’s office.

Helen Brown, delegated director of the auditor general’s office, did not respond to an email request for comment on the break-in and theft and no one answered the main phone line at her office all day on Monday.

When asked if he felt safe being in the office, Crank responded, “No, I don’t feel safe at all here, currently.”

“With what’s going on, I would say the way our office has been left, it’s violating,” he said. “It feels violated in our own offices where we should feel safe.”

He confirmed that employees will be out at least until a deep cleaning is done in the office.

“We’re not sure of the status of the individuals who broke into our office,” he said. “We just want to make sure to take steps to the office is clean and our staff is safe from any possible COVID or any other diseases.”

Nelson indicated it goes without saying that Damon is concerned.

“It’s very disheartening… especially for two entities that are just trying to work for the people,” said Crank. “This is something that really breaks into our spirit but at the same time my staff here at ONGD are resilient and we will definitely be coming back to full force again shortly, hopefully.”