Treaty is here! One of Only 2 Copies Now in Nation’s Hands 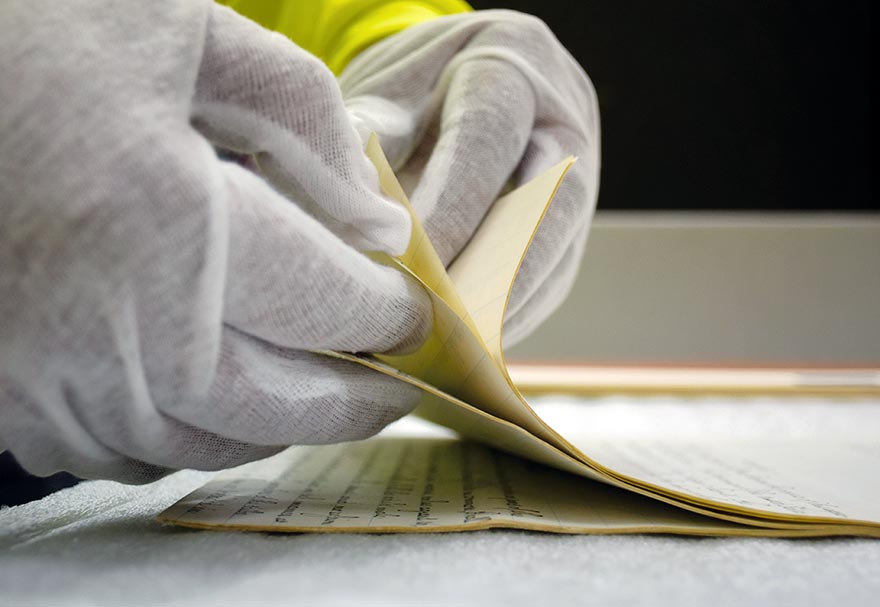 Navajo Times | Ravonelle Yazzie
A copy of the original 151-year-old Treaty of 1868 will be unveiled at a press conference on May 29 at the Navajo Nation Museum in Window Rock. 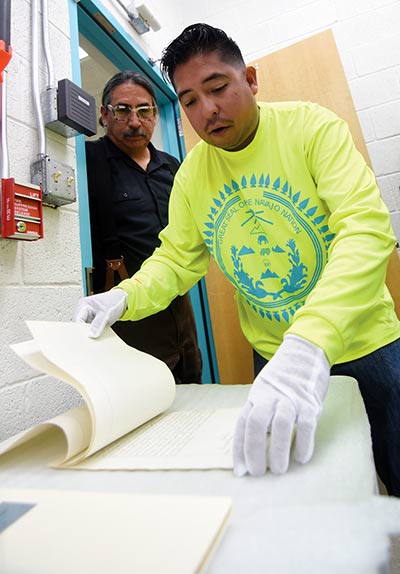 A copy of the Treaty of 1868 — one of only two known surviving copies — arrived at the Navajo Nation Museum this week and will be unveiled at a press conference today.

The Navajo Times was given exclusive access today to the “Tappan copy,” which was in the possession of Indian Peace Commission member Samuel F. Tappan’s family until it was donated to the Navajo Nation this week by Tappan’s great-grandniece Kitty Weaver of Manchester, Massachusetts.

The museum had been negotiating with Weaver to obtain the treaty since last fall.

The museum’s associate registrar, Ben Sorrell, spent the morning combing the treaty for differences between it and the copy from the National Archives, which was on display at the museum last summer.

The Tappan treaty is “kind of abridged,” he reported. “It has all the same stuff in it, but the language is shortened.”

Museum Director Manuelito Wheeler said that’s probably because it was a draft kept by Tappan for his own reference.

There are other very slight differences: numerical amounts are listed in figures as well as hand-written (in the archived copy they are only spelled out), and the words “in lieu thereof,” with regards to goods that were to be distributed among the Navajo, were inserted in a different place in the original, although the meaning is the same. 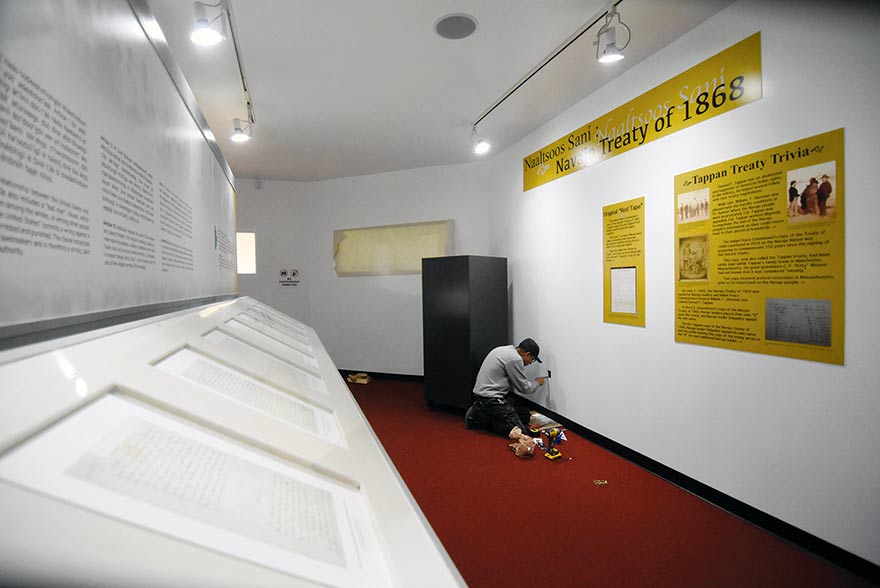 Interestingly, Chief Delgadito, the only one of the signers to write out his name instead of just marking an “X,” also signed this copy of the treaty although the other Navajo headmen did not appear to have signed their marks. There are X’s by their names, but they are in the same hand, according to Wheeler, meaning that the drafter probably placed the X’s to signify that the chiefs had signed the original.

“Did the scribe try to duplicate his signature? Did Delgadito insist on signing both? Did different people help him to write his name? We don’t know,” said Wheeler.

Both Sorrell and Wheeler pronounced the 151-year-old document remarkably well preserved, considering it was sitting in an attic for a century before the family discovered it in the 1970s.

“It got lucky,” said Wheeler, explaining that the enemy of paper documents is fluctuations in temperature, light and humidity. “It was in a trunk undisturbed for most of those years.”

Or maybe it wasn’t luck, Wheeler added, noting that many traditionalists, including himself, believe the “Naaltsoos Sani” has a spirit.

“Maybe it was taking good care of itself so it could come back here and be among us,” he postulated.

The Nabik’iyati’i Committee is expected to approve legislation this afternoon formally accepting the gift on the part of the Nation.