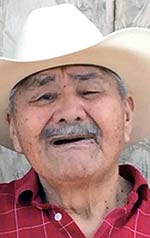 GALLUP — Funeral services for Johnnie Howe, 78, will be held Friday, May 31, at 10 a.m. at Rollie Mortuary in Gallup. Burial will follow at the family plot in Rock Springs, New Mexico.

Sen. John Pinto was born Dec. 15, 1924, in Lupton, Arizona, to Jim and Ellen Pinto. He was the oldest of seven children.

Sen. Pinto entered school at the age of 12 and graduated from high school in Torrance, California. He enlisted in the U.S. Marine Corps and was trained as a Navajo Code Talker. He was honorably discharged at age 21. Sen. Pinto began working for the Department of Social Services where he met his wife, Joanne Dennison Pinto. They had four children together, Flora, Cecil, Galen and Karen.

Sen. Pinto returned to school at the age of 35 to receive his bachelor’s degree in elementary education. He then continued on to earn a master’s degree.

Sen. Pinto was elected McKinley County commissioner at age 46. In 1977, at age 52, he was elected to his first term as a New Mexico state senator where he served for over 40 years until his passing.

When not in session he continued to work for the Navajo Nation Department of Transportation.

On May 17, 2019, at age 94, he received an honorary doctorate of public service from Navajo Technical University.

Sen. Pinto dedicated his life to serving his people and his family. He was a dedicated public servant and a strong advocate for issues affecting Native Americans. He was truly a people’s champion.

Sen. Pinto was a source of great pride for his family and his people. What his family treasured most was the love and wisdom he shared. He maintained a clear division between who he was as a senator and his responsibilities as a husband, father and grandfather. To each and everyone he gave his utmost.

“My philosophy is to be happy, to meet people, to love people, all the races, because they all need help. They all need good water to drink, good food to eat, a good warm place to stay and they need good jobs. That’s the basic needs.” — Sen. John Pinto

ST. MICHAELS, Ariz. — Funeral services for Jay Logg, 62, of Klagetoh, Arizona, will be held Friday, May 31, at 10 a.m. at the St. Michaels Mission in St. Michaels, Arizona, with Father Jose Gutay officiating. Burial will follow in Klagetoh.

Jay graduated from Window Rock High School and was currently a student at Northland Pioneer College. He was employed as an ironworker with International Association of Bridge, Structural, Ornamental and Reinforcing Iron Workers AFL-CIO Local Union 75.

Jay was founder and president of Oak Ridge Eight Second Thunder Bull Riding. He was the Arizona State High School Bull Riding Champion in 1976 and won numerous buckles and awards for bull riding. Jay also played basketball for the Window Rock Scouts and was a certified official for the High School Basketball Association.

A reception will take place at the Klagetoh Chapter House, following services.

REHOBOTH, N.M. — Funeral services for Duane Lee Morris, 36, will be held Friday, May 31, at 10 a.m. at the Rehoboth Christian Reformed Church in Rehoboth, New Mexico. Burial will follow at the Rehoboth cemetery.

Duane was born Jan. 29, 1983, in Gallup, into the Tl’ógí (Hairy Ones Clan), born for Tó’aheedlíinii (Water Flow Together Clan). His nali is Kiyaa’áanii (Towering House); chei is Táchii’nii (Red Running Into the Water People).

He passed away May 25, 2019, in Jamestown, New Mexico. Duane graduated from Rehoboth Christian High School in 2001 and received an associate’s degree in animal science from New Mexico State University. He was employed at Home Depot and enjoyed ranch work and spending time with his family.

GALLUP — Funeral services for Herbert Morgan Jr., 74, will be held Friday, May 31, at 2 p.m. at Rollie Mortuary in Gallup. Burial will follow at the Santa Fe National Cemetery on Friday, June 7, at 11 a.m.

Herbert graduated from Gallup High School and enlisted in the U.S. Army, receiving the National Defense Service Medal and Sharpshooter M-14 medals. Herbert was an avid chess and card player. He was an excellent sandcasting silversmith, rancher and dedicated family member.

Herbert is survived by his brothers, Herbert Morgan and Henry Morgan.

CRYSTAL, N.M. — Funeral services for Everett Yazzie, 84, of Crystal and Naschitti, New Mexico, were held May 29 at the LDS Church in Crystal, with Lafe Damon officiating. Interment followed at the family plot in Crystal.

Everett attended Sherman Institute and worked as a carpenter in San Jose, California, retiring from the BIA Facility Maintenance. He was also a self-employed plumber and rancher.

Everett enjoyed taking care of his animals, participating in family ceremonies and helping the community. Everett is survived by his wife, Agnes Yazzie; sons, David Yazzie and Walter Yazzie; daughters, Sandra Yazzie and Rita Adair; and 15 grandchildren and 11 great-grandchildren. Everett is preceded in death by his parents, Margrett Begay and Monahan Yazzie.