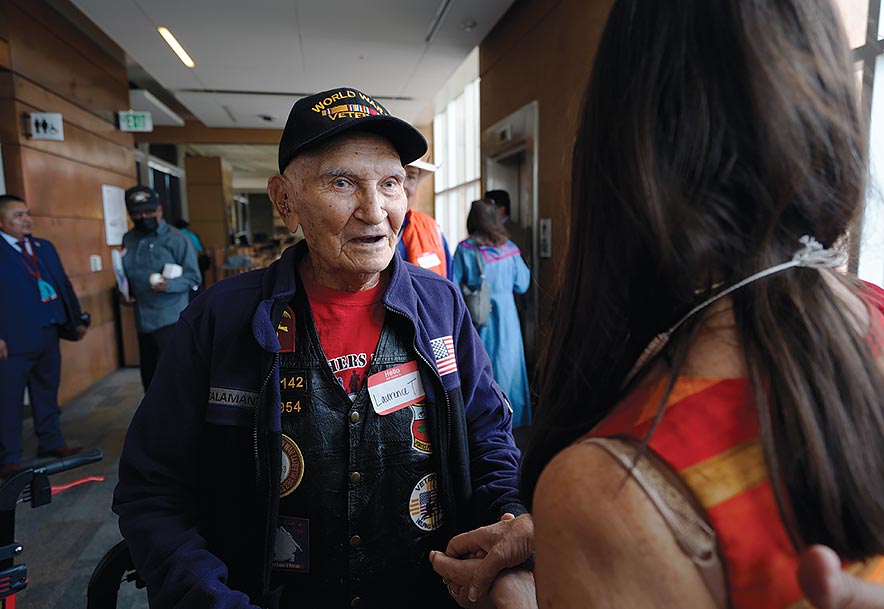 He had to leave the world to combat his demons.

Olin Kieyoomia, an Army veteran, decided the answer to handling his military-induced traumas was to take his own life.

“I hung myself,” Kieyoomia told Rep. Teresa Leger Fernandez. “I wasn’t on this earth for 15 minutes.”

He comments were on on Friday during a Voices for Veterans listening session held at the University of New Mexico-Gallup.

“The emotions and everything I felt that day just got too much, and I did it, not knowing that I’m hurting my wife and my kids and the people who cared about me in my community,” he said.

Lisa Hudson from Thoreau, New Mexico, and the wife of a Vietnam War veteran, said her husband turned to alcohol to deal with his combat demons.

“He had no place to get help,” Hudson said. “He did try, but there is no help out there.”

Eventually after battling with PTSD, alcohol took her husband’s life in 1987.

Kieyoomia said he shared his story as proof of how PTSD could trigger a veteran to take his life. 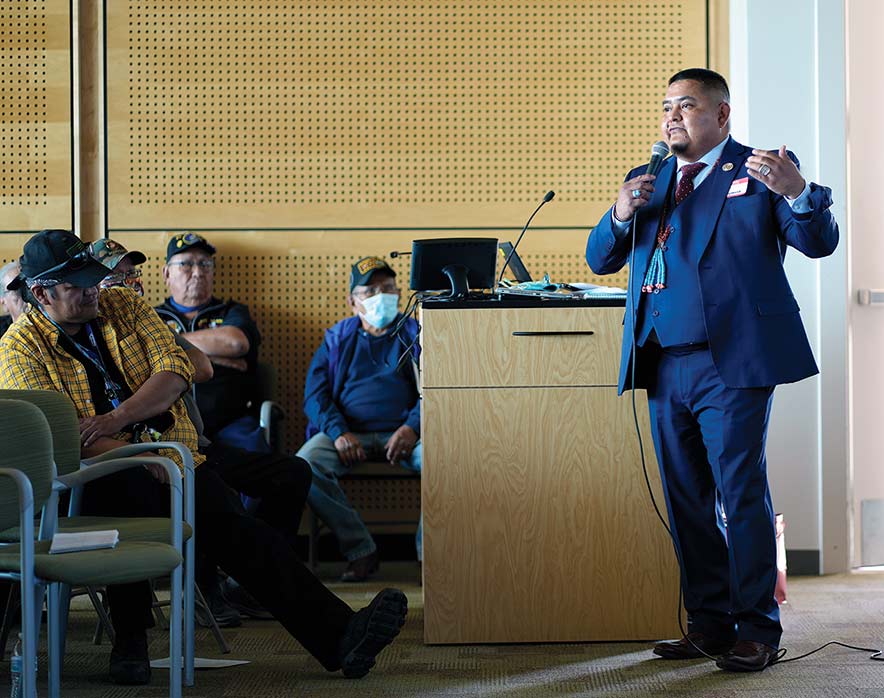 Navajo Times | Donovan Quintero
Army veteran Olin Kieyoomia from Tohatchi, N.M., shares with a room full of veterans how he tried ending his life because of his traumas from the military on May 6 in Gallup.

After its closure, the VA wrote in its report that it would collaborate with the Indian Health Service to provide primary care and outpatient mental health services to its 1,770 veterans registered in McKinley County.

The proposed closing is due to a projected decrease in the number of veterans for which CBOC provides care. The VA predicts the number to decrease to 1,654.

It isn’t just the Gallup CBOC that is facing possible closure. Veteran’s clinics in Las Vegas, Raton and Espanola are also recommended for closure.

The VA report said veterans in Apache County in Arizona would no longer be using health-care services in Gallup but would have to travel to Prescott.

Fernández told the veterans in attendance that they should not have to travel to Albuquerque to receive care.

“Those services that you deserve and that you have earned must be provided everywhere,” she said. “And we want to remind you that this clinic is not closing.”

Fernández blamed the proposal to close the facility on the Trump administration, and the report was done in 2019-20.

Fernández referenced the CBOC staff shortage was short by 65%.

According to the New Mexico Health Care Workforce Committee, as of December 2020, there were 10,156 licensed physicians, 3,386 certified nurse practitioners, 1,607 primary care physicians, 229 obstetricians and gynecologists, 154 general surgeons, 305 psychiatrists, and 4,739 practices in New Mexico.

If the current providers were not redistributed, New Mexico would need 328 additional primary care physicians, 117 psychiatrists, and 6,223 registered nurses to meet the national health-care staffing standards.

According to the University of Arizona’s Economic and Business Center, in Arizona, 488,061, or 9%, made up the state’s total veteran population.

Females who served their country and living in New Mexico made up 9.8% of the state’s population and 8.9% of Arizona’s total veteran population.

Fernández said she heard similar stories from Raton, Espanola, and Las Vegas, that if the clinics had shuttered their facilities they would have lost veterans.

Kieyoomia said when he heard of the proposed closure of the veteran clinic in Gallup, he had to go into action for the 70% of Navajo and Zuni veterans who used the VA clinic.

“It’s pretty sad that the Navajo Nation had no representation,” said Kieyoomia, saying that no tribal officials did not attend the listening session. “I expected a lot more from the Navajo Nation to be a participant.”

The Tohatchi native and Army veteran said he isn’t perfect and has trouble dealing with the traumas from his service.

“I had real trouble at the beginning when I got out of the military, trying to adjust,” he said. “There were no services out there on the Navajo Nation and in New Mexico.

“But with a lot of encouragement from my community, my veterans, somehow I came out of it,” he said. “I just like to say that people make mistakes in life, but be the determination, or shouldn’t be labeled as that, that they can always come out as something better.”

Fernández said she would be taking the stories the veterans shared with her back to the Secretary of the Veterans Affairs Denis R. McDonough and let him know the veterans in her district rejected the VA report.

“It is really to take that pain that we are hearing from the veterans that they suffer every day and the importance that this clinic is for them – and to save their lives – to help heal their lives. We need to take those stories and take them back,” the congresswoman said.

Exactly when the clinic could close is unknown, but the VA is currently in talks with IHS and has entered into an agreement with the Navajo Nation to study sites for a replacement in Gallup, the report stated.