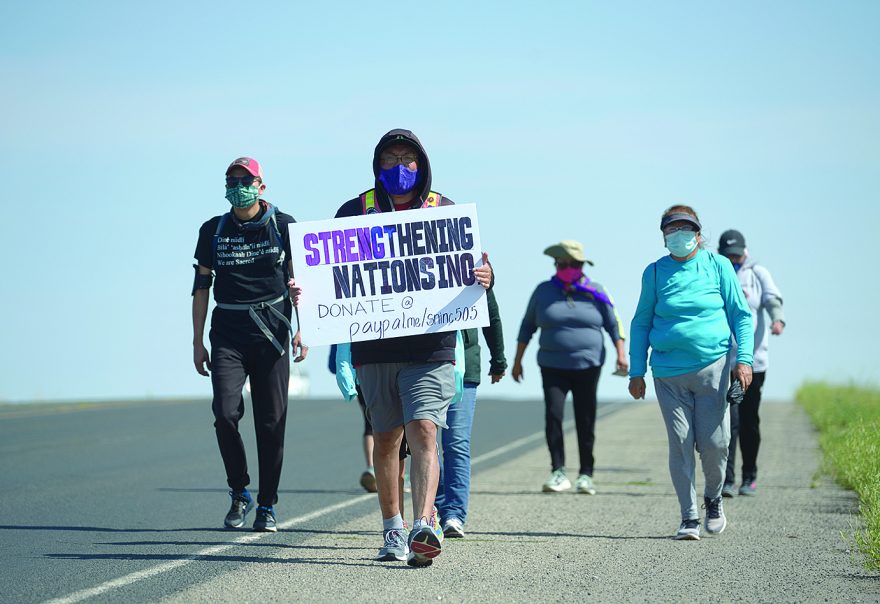 John Tsosie, founder of Walking the Healing Path Inc., leads a small group of people on Tuesday as they walk to raise awareness of domestic violence shelters not getting any funding form the tribe.

For 17 years, John Tsosie has walked to bring awareness of domestic violence and sexual assault.

After learning Amá Dóó Áhchíní Bíghan Inc., the Chinle domestic violence shelter that’s been helping victims of domestic violence since 1989, was not getting its federal pass-through funding from the Navajo Nation because of technical problems with its contract, Tsosie, founder of Walking the Healing Path Inc., decided to bring awareness to what was going on.

“Once again, these nonprofits are being ignored,” Tsosie said. “I think if they weren’t (being ignored), we wouldn’t have to do this.”

On Monday morning, he and his father, Ernie Tsosie Sr., laced up their sneakers.

“We kick off our Journey for Our Non-Profit Shelters & Organizations,” Tsosie wrote on his awareness Facebook page on Monday morning.

He said they would also walk for another DV program, Strengthening Nations Inc., based in Gallup.

On Tuesday, Tsosie said a representative from Johns Hopkins Center for American Indian Health stopped by his walk and donated a number of items that included baby wipes and infant formula.

As Tsosie began his awareness campaign to shed light on ADABI’s funding problem, its executive director, Lorena Halwood said the effort to try to appease the Navajo Nation Division of Social Services so its annual contract could be signed was “emotionally draining.”

ADABI and the other nonprofit domestic violence programs finally got their contracts last Friday. Halwood said Wednesday she was debating whether to sign it, because she wasn’t sure she could legitimately spend the $250,000 federal grant in two months. The U.S. fiscal year ends Sept. 30.

DSS Principal Accountant Brenda Tsosie said Wednesday a no-cost extension can be granted to contracts that have not expended their funds within the allotted time.

According to Halwood, ADABI works with 15 chapters within the Chinle Agency as well as surrounding areas.

“We assist any victim of domestic violence and sexual assault,” the 23-year-old executive director said. “We provide services to 25-35 victims a month, in July we have provided services to 44 victims.”

In May, the Health, Education & Human Services Committee asked the shelters to provide a budget for possible allocations of CARES Act funding.

A July 3 news release from the Navajo Nation Council stated the Council “held more than a dozen work sessions,” to hear how the CARES Act money could be used to help “Navajo Nation partners on COVID-19-related needs.” One of those partners mentioned are domestic violence shelters.

Through their efforts under the new Dzil Asdzaan collective, Halwood said a total of $75,000 was raised for ADABI after equipping the program’s website with a donate button.

In addition, Jewel and Yeung also procured a sponsorship to help ADABI with diapers. Not only that, plans are in the making to purchase the shelter a vehicle with OnStar “so victims who are quarantined due to COVID-19 can still access the internet when we go to help them with protection order and victim compensation applications and other documents,” Halwood said.

During his walk, Tsosie said a passer-by donated $44 to the shelters.

Nelson and Vasquez started the domestic violence program in August 2019 and said they have both been working for free, directing all of its funding towards sheltering victims in hotel rooms, ensuring victims’ court documents were done correctly, and fundraising.

Since the pandemic hit the area, Nelson and Vasquez said they’ve focused their efforts on helping distribute 13,000 boxes of donated food to families living within McKinley County and the Navajo Nation.

They too, Nelson said, have been surviving on donations, but the work to help those in need is more important than the money and why they could not afford to close their doors.

“It’s our passion,” Nelson said. “Caring for other people and families besides our own is something Christian and I both share in our values. It’s possible we may never know how it’s helped individuals or families, but it could save a life or give hope and that’s what makes it worth it.”

Halwood also said she could not thank her staff enough for what they’ve done to keep the shelter from closing.

“I commend my staff and volunteers for never giving up and they kept showing up even with no pay,” she said. “They really do have compassion for the survivors and our priority has always been their safety.”

Tsosie said they’ll begin their walk this morning (Thursday) from the Lowe’s parking lot in Burnside at 8 a.m. and will stop at the ADABI office in Chinle on Monday. Then, from Aug. 13 to 20, their walk begins from the Holiday Inn parking lot in Chinle and stops at the Navajo Pine Market in Navajo, New Mexico.

The final stage of the walk will start from Quality Inn in Window Rock on Aug. 26, and end at the Rio West Mall parking lot in Gallup on Aug. 28.