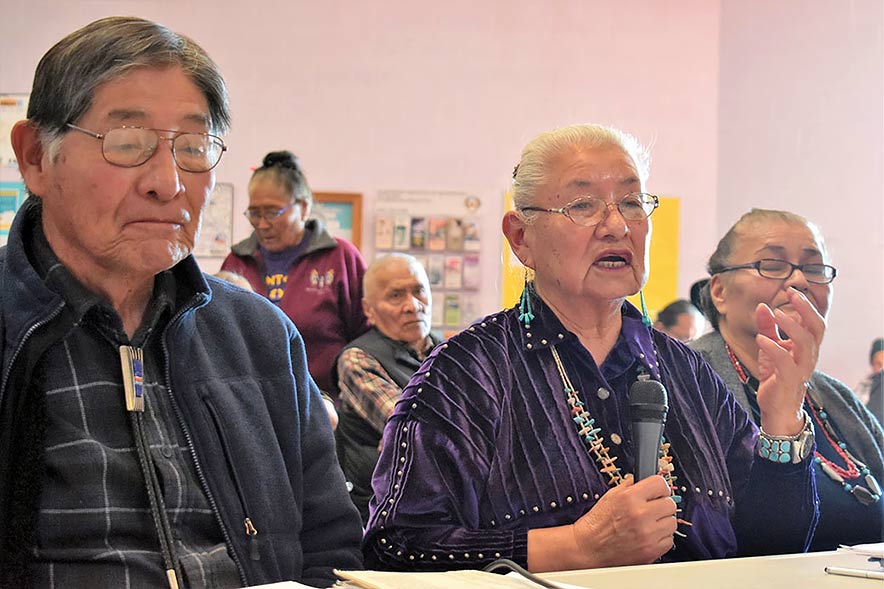 Percy Deal remembers his mother and father, who lived to be 97 and 100, respectively, as very traditional people who relied heavily on Mother Earth and her natural resources for their livelihood and well-being.

“They would speak to the Spirit, the Creator, about their needs and their planning for the future,” said Deal.

His father would tell stories that were potent with life’s lessons.

“My Dad used to say that before an infant is conceived, the Spirit knew there was going to be a child,” said Deal. “The Spirit would get together and talk about the unborn child and what type of special gifts they would give to this child.”

Those gifts would come with no instructions, and part of the plan was for each individual to learn how to solve life’s challenges using them, he said.

“It would be up to this child as he or she grows to figure out what these special gifts were and what their purpose is,” he added. “The infant would also be blessed with a heart to love and to care.”

Deal explained that Spirit is always watching as a child grows into adulthood.

If Spirit sees that someone is not using any or all of the special gifts they were blessed with, or if they are using them improperly, Spirit will send an issue to this person so that they can remember their gifts in order to overcome the issue, he said.

“It would serve as a reminder,” said Deal.

It could be an individual, family or community issue, or even a Navajo Nation-wide issue.

“It all depends on what the Spirit sees as being abused or misused,” said Deal. “If we’re not using these special gifts, then the spirit will send an issue down to us.”

Deal believes that’s what is happening now with the emergence of the coronavirus.

“I believe the Spirit has come to the conclusion that we are abusing something extremely valuable — Mother Earth, the water and the air,” he said.

These are the three most important gifts to all people, he said, for without one or the other there will virtually be no life.

The government, whether it be federal or Navajo, has been allowing extractive industry to come in and destroy these gifts, he said.

“It’s been such a major abuse that the Spirit decided to send this monster to remind us that we have an obligation to Mother Earth,” he said.

That monster is the coronavirus.

“It’s time that we, as people, begin to piece together the special gifts that we are made of and figure our way out of this,” said Deal.

At 71, Deal feels he has a responsibility to make sure his grandchildren will have a clean world to live in, with clean water and air to breathe.

“I have to exercise that and voice my opinion,” he said.

Deal believes that all of the elders on the Navajo Nation need to play a role.

“I think it’s a matter of education by the elderly people,” he said. “That’s our responsibility, to talk to our kids and grandkids.”

He says it’s critical that each Navajo Nation Council delegate and the president also listen to the elders.

“Every one of those people have elderlies in their family,” he said. “They need to sit down and talk with them so that they can learn, rather than just focusing on what comes from D.C. on paper. They need to get away from this Window Rock business.”

In terms of the Coronavirus, Aid, Relief, and Economic Security Act monies that were given to the Navajo Nation, Deal believes that is only there to react to the damage and the harm that has already been done by the virus.

“We need something more than that for the sake of future generations so that this is not repeated,” he said.

Deal sees that the Navajo Nation governing body is now challenged to respond to the crisis in the right way while navigating the stringent federal guidelines and policies that came with the CARES Act funds.

“The federal government really doesn’t know us,” he said. “It doesn’t have any idea what our culture, our religion, our beliefs are. I think the Navajo Nation has to take a stand to say we have a belief and we have traditional guidance we want to use.”

Deal believes the medicine people need to be relied on for guidance during this time.

“We need to find out, talking to the Spirit and the Creator, and ask, ‘What do we need to do to work our way out of this? Who do we go to to request forgiveness and right the wrongs that we’ve done?’” he said.

The medicine people can then send out a message to the Navajo people about what sort of correction needs to be made, he said.

Deal says this would be far better than throwing money at the effects that have already taken place in a reactive manner.

“Yes, we need water, equipment and supplies to address the condition, but we need to go beyond that,” he said. “I think the president was absolutely wrong to veto the funds to the Diné Hataalii Association.”

All faith-based organizations on the Navajo Nation should get together and find common ground, suggested Deal.

“Fundamental law is there for a reason and purpose, to protect our culture, ourselves, Mother Earth, the water, the air, the plants, and all the living creatures,” he said. “We need to re-embrace that.

“Fundamental law that tells us that we are stewards of the land and if we’re not going to uphold our responsibility there are going to be consequences, and consequence is upon us,” he said.

Deal says that where he lives in the Big Mountain area between Hard Rock and Forest Lake chapters, the aquifer is the sole water source and yet none of the homes have running water.

“For over 50 years, the Navajo Nation dedicated the aquifer to Peabody mine to support their operation,” he said. “Prior to Peabody, no man ever touched the aquifer, which is precious, pristine water.”

Living without water all of their lives, people in the Black Mesa region have learned how to save water and care for the water, said Deal.

“Our parents used to tell us, ‘You don’t waste water,’” he said.

The impacts of the mine, the drought, and now the coronavirus have been devastating and have left community members at great risk, he said.

“The virus is probably the most horrible disease that has ever visited the Navajo Nation,” said Deal. “All of the health professionals are telling us, ‘You are so susceptible to the disease if you don’t have any water.’”

Because of the virus, the Indian Health Service and Navajo Nation finally decided that residents should have water and now they are planning to survey the area to provide rights-of-way for waterlines, he said.

“That’s one thing the virus has done for us,” said Deal. “If it wasn’t for the virus, there would still be no plan to provide the water.”

So the impacts have been both negative and positive, he said.

The virus has also highlighted the insufficient infrastructure overall, including lack of housing, power, health care, essential businesses, and the inadequacy of the education system.

Deal says the government has realized that even the $714 million from the CARES Act is not enough to address all problems, especially with the deadline of Dec. 31 to spend it.

“There’s no way that the Navajo Nation is going to meet that deadline,” he said. “You can’t box us in between March and December.”

In the eyes of the federal government, the funds are sufficient but yet the guidelines and the timeline are unreasonable, said Deal.

“When the deadline comes they’re going to take everything that’s not used and then say, ‘We gave you enough resources and you returned it,’” he suggested. “I think it’s a trick that the administration has up its sleeve.”

Deal believes this is a perfect moment for tribal leaders to approach Congress and the Department of the Interior to remind them of the obligations of the U.S. government.

“The federal government has responsibilities to all Indian Nations for taking their land, their water and so forth,” he said.

He believes the Navajo Nation should outline all of the obligations and federal promises that were made, whether by treaty, congressional act, executive order or federal court order.

“The Navajo Nation needs to use the legal instruments already there to fight and say, ‘You can’t impose these stringent guidelines on us and you cannot impose a deadline on us,’” he said. “They need to take a stand on that and all the other tribes will join the Navajo Nation. They can win this thing.”

Deal says that at the local level, the Navajo Nation’ s coronavirus relief efforts have been less than sufficient.

“Ever since this whole thing started there’s been total confusion and chaos within the chapter,” he said.

He said the only people working at the Hardrock Chapter are the community health representative and senior center supervisor and there has been very little information coming to them from the Chinle Agency or Window Rock.

The chapter house has been closed and was also contaminated with the virus.

“The only direct services out here was when the president came out one day for a couple of hours to deliver food boxes,” he said. “That was about it.”

Beyond that, he said, most direct relief and assistance has come from non-governmental organizations like the Navajo & Hopi Families COVID-19 Relief Fund.

“I would say about 90 percent of donations have come from non-Navajo organizations,” he said.

Deal also wonders what has happened to all the money that was donated to the Navajo Nation government.

“My understanding is that the Navajo Nation is sitting on over $7.4 million dollars in donations that hasn’t been used the way the donors wanted it to be used,” he said. “That was meant as a direct benefit to the people, which we have never seen. I don’t know if we’ll ever see it.”

Deal says the Navajo Nation government needs to appreciate what the NGOs are doing.

“These people are very caring and the majority of them are not on payroll,” he said.

The work they are doing is out of the kindness of their heart and their love for the people and the environment, he said.

“They know that we are at the very edge of whether we’re going to survive or terminate ourselves,” said Deal. “They decided to join the fight against the virus. It’s too bad the Navajo Nation government doesn’t understand that. They think that these people are interfering when they’re doing everything they can at zero expense to the Nation.”

Deal says in order to ensure a good future for the younger generations, everyone must be united.

“We still have those special gifts that we were blessed with by the Spirit,” he said. “We need to bring those out and work with that – all of us.”