Woman may have seen missing man 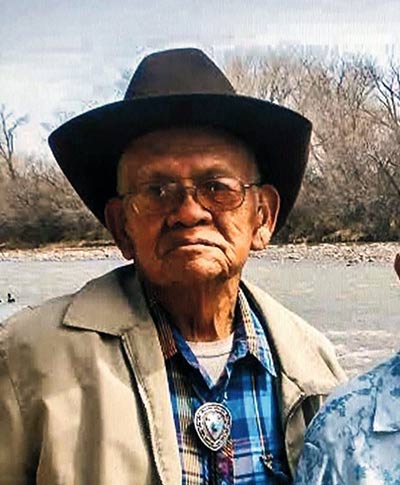 Navajo Police are searching for Dennis Hardy, 94, who was last seen at his home located west of the Veterans Cemetery in Fort Defiance. Anyone with any information is asked to call the Window Rock Police District at 928-871-6111/6112.

A witness told Apache County Sheriff’s Deputies she may have seen Dennis Hardy Sr., 94, who has been missing for five days, early Sunday morning near his home in Fort Defiance.

The description the witness gave police of the man’s clothing matched the clothing Hardy was last seen in, said Sgt. Tony Notah with the Apache County Sheriff’s Office.

Notah said the witness, from Gallup, said she saw a person lying on the side of Navajo Route 12 around 3 to 3:30 a.m. Sunday near the Veterans Cemetery in Fort Defiance.

The woman told Notah she stopped and noticed it was an elderly man wearing a chocolate-colored Carhartt jacket, blue jeans, with a wooden walking stick, and a camouflage Oregon State University baseball cap. She asked him if he needed help. The man reportedly told her to leave him alone and said “I got somewhere to go.”

A Silver Alert was issued around 2:30 p.m. on Friday stating Hardy was on foot and was last seen wearing a brown hoodie and blue jeans.

According to Notah, the witness said the elder got up and began to walk south along the highway. She followed him for about 20-30 minutes. She last saw him about 500 yards south of his residence.

Police, volunteers and family members on foot, horseback, and ATVs, armed with drones — even a helicopter from the Arizona Department of Public Safety — have been searching for Hardy since Sunday. Notah said Hardy’s daughter stated she last saw her father Saturday night around 9 p.m.

The following morning, after searching the house for him, she and other family members began searching for him around the Fort Defiance area.

Since Sunday, the search, which included family and friends’ residences in Sawmill, Tse Bonito, Lupton, along Interstate 40, and Pine Springs, has been unsuccessful.

Hardy is described as being 5 feet 2 inches tall, 150 pounds, with brown eyes and gray hair, wearing silver framed glasses. Notah added that he is diabetic.