A year ago, after a rash of complaints about non-emergency transport services on the reservation, the Navajo Nation Department of Health implemented strict new rules for such companies.

The rules, which included hefty application fees, criminal background checks for all drivers, drug test results and a Navajo Nation business license, winnowed out a lot of transport companies, both Navajo- and non-Native owned. As of 2020, only four Navajo-owned NEMT fleets are doing business on the Nation, and of the original 200 or so companies based off the reservation, 88 were registered to perform transports on the reservation as of last week. But a local towing company says no one is enforcing the regulations, and as proof, its employees gave this reporter a tour through their junkyard. 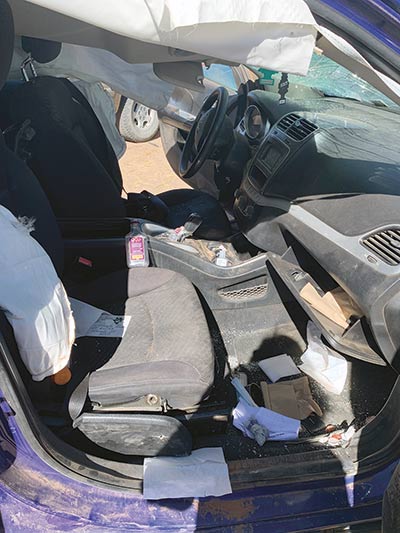 They asked that both their names and the name of their company be withheld, as it’s not their standard procedure to allow people access to the wrecked vehicles they store. “We thought that this was important enough to put that policy aside,” said the owner. “People need to know about this.”

According to the owner and employees, the company gets an average of a call a week about an accident involving a non-emergency transport vehicle. (Navajo Nation Police Department spokeswoman Christina Tsosie did not return an email to confirm what percentage of accidents involve NEMT cars.) The junkyard tour was shocking.

Not only were the NEMT vehicles banged up enough that anyone in them was probably injured, but most of them were a complete mess, filled with fast-food wrappers, scattered papers, clothes and other debris.

Of the four NEMT vehicles that were in the lot the day the Times visited, two had multiple empty and partially full bottles of alcohol scattered on the seats and the floor. According to the employees, all of the vehicles were from off-reservation companies.

“The Navajo companies that are left, they’re the ones that are following the rules,” one employee said. “But these off-rez companies, nobody’s watching them.”

“When I think of elderlies, children, disabled people riding in these vehicles, I’m just on fire,” added another.

Most Medicaid beneficiaries   — about 90 percent — get their Medicaid insurance through one of several contracted health plans which also contract for medical transport when necessary, but since American Indians are eligible to get their health care at Indian Health Service institutions, they aren’t required to use a contracted health plan, Capriotti explained.

“They can use what we call fee-for-service reimbursement, which means we pay the transport companies directly,” she said.

While there are basic requirements all the companies have to meet, like training for drivers, each tribe can add its own slate of rules for companies to operate on their reservations, as the Navajo Nation did last year. A glance at the AHCCCS reimbursement rate chart at first makes one wonder how these companies stay afloat.

One dollar and 53 cents per mile hardly seems like enough to pay a driver, maintain a fleet of vehicles and carry the $1 million worth of insurance per accident the Navajo Nation requires. But, a Navajo in the business explained, there are a lot of extra charges that can be tacked on. If the driver has to wait for a patient who is at the doctor, he can charge a waiting fee of $4.59 per half-hour. A fee of $14.74 is added for each client pickup, and so on. “A transport from Window Rock to Flagstaff can amount to approximately $560 per client,” the industry representative said.

That’s assuming the companies are honest. Each driver is supposed to keep a record of each trip, which is later submitted to AHCCCS, but it’s hard to police. In 2017, a Fort Defiance family was convicted of bilking AHCCCS out of $3 million simply by submitting forms for trips that never took place. The towing company employees suspect this is still going on. They showed this reporter a stack of pre-filled trip reports they found on the floor of one vehicle.

“Here’s one dated September for a transport to an AA meeting in Show Low,” one said. “AA hasn’t met since COVID started.” Showing a stack of partially filled-out trip reports, she added, “These are like blank checks.”

The wrecked vehicles also reveal other dirty little secrets. A vehicle with an odometer reading over 300,000 is not supposed to be used for medical transport, but the employees say they see readings over that figure all the time.

And remember that $1 million in insurance the companies are supposed to have? “Half the time, they don’t even come to claim the vehicles,” said the towing company owner. “That tells me they’re not reporting the accident and they don’t have insurance.”

Capriotti said that while AHCCCS can take complaints about companies billing fraudulently and such, the tribes are expected to enforce their own rules. In the Navajo Nation’s case, that’s the responsibility of the Department of Health … but according to the towing company employees, no one is specifically assigned to enforce the rules. The companies can also hide behind medical privacy laws when pressed for details on a transport, according to one of the towing company employees.

Jill Jim, director of the health department, did not return either of two phone calls to ask for more information on how the rules are enforced. Also not returning calls was White Horse Medical Transportation LLC, which had a badly damaged vehicle in the lot that day, complete with an empty liquor bottle in the front seat.

The first call was answered by a text asking if the company could call back later … it never did. A second call turned up a full voice mailbox. Ironically, the company has an A+ rating from the Better Business Bureau, and no reviews. At Prescott Dial-a-Ride LLC, another company that recently had one of its vehicles end up in the scrapyard, the call was answered by a dispatcher. After this reporter explained the purpose of the call and asked to speak to an owner or manager, the dispatcher transferred the call to a line that played a recorded “I am unreachable,” followed by the call being dropped.

“That’s why I’m saying we have to do a better job of enforcing these rules,” said the towing company owner. “As it is, they’re only penalizing the people who are following them.”