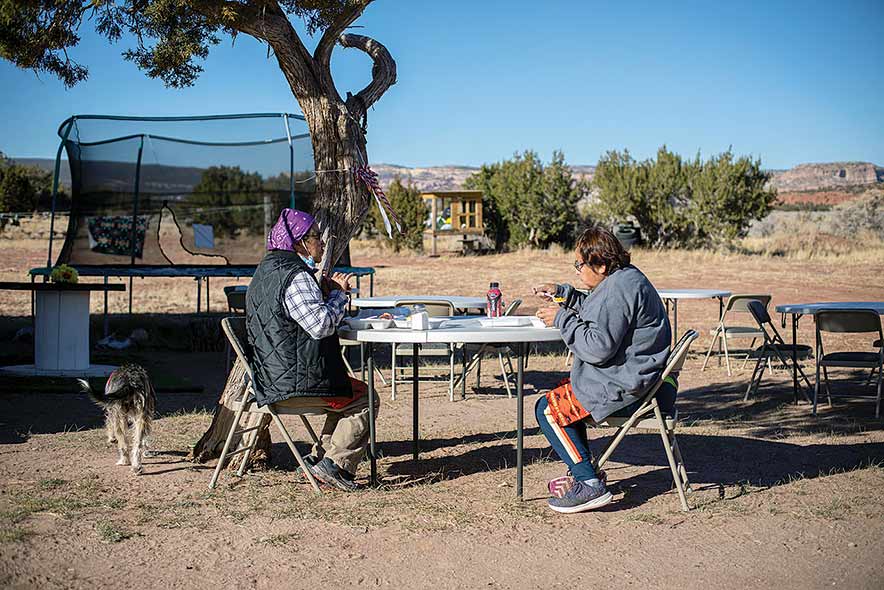 Navajo Times | Sharon Chischilly
Two women enjoy an outdoor, socially distanced Thanksgiving dinner, but since it's unlikely many people were that compliant with CDC recommendations, the Navajo Nation, along with the rest of the country, is bracing for an increase in COVID-19 cases.

After a few promising days in September with no new coronavirus cases, the Navajo Nation may have let its guard down too soon. It’s currently riding the second wave of COVID-19 infections, and at its peak Nov. 22, it was half again as bad as the first.

Since then, following the Nation’s Nov. 18 shelter-in-place order, new cases have declined somewhat — but Dr. Thiery Va, an internal medicine specialist with the Indian Health Service, and epidemiologist Larissa Cruz, representing the Navajo Epidemiology Center, cautioned a group of education leaders meeting by Zoom Tuesday not to put too much credence in the graph’s downward trend.

“There is likely a delay in reporting because of the Thanksgiving holiday,” Cruz explained, adding that the Nation hasn’t even started seeing the effects of the holiday, when many families gathered in spite of admonitions to scale down celebrations to the immediate household.

This is bad news because, by every measure, the Nation is currently teetering on the brink of being overwhelmed, Va and Cruz told the educators. The positivity rate for testing has crept up from 18.5% to 19.5% in the past week, 80% of intensive care beds on the Nation are full, and the Nation is back to “Stage Zero” in terms of restrictions, meaning the experts recommend President Jonathan Nez’s non-essential business closure and shelter-in-place order remain in effect. (Nez, who was in attendance, hinted that he was probably going to announce that Wednesday.)

If the Navajo Nation were a state, the women said, it would be second only to North Dakota in infections per capita. How is COVID spreading so rapidly on Navajo? In the last month, large family gatherings were again the main culprit, according to contact tracing, but Va added rodeos and roping competitions to the list.

“We’ve had quite a few cases from those events,” she said. She added that the large number of men who work off the reservation, in the construction fields or on the railroad, are bringing the virus home to their families while they’re still in the asymptomatic stage and don’t even know they’re sick. “From there, it spreads from household to household to household,” she said. “You get it from people you know.”

There is some good news in terms of the recent successful vaccine trials, and Nez revealed he had written a letter to the Centers for Disease Control’s advisory committee on vaccine distribution asking that the Navajo Nation and other Native American tribes be among the first to receive the vaccine because of their high rates of infection and death.

He added the IHS has already rolled out a plan to first install the infrastructure (both the Pfizer-BioNtech and Moderna vaccines, which are being considered for emergency approval, have to be kept very cold) and then start administering the vaccines.

The advisory committee met Tuesday and decided that priority for the first 40 million doses of the vaccine, expected to be delivered by the end of December, should be health care workers and residents of nursing homes. These are just recommendations and states will be in charge of the distribution within their borders. Native American tribes may decide to have their vaccines distributed either by the state (or states, in the case of the Navajo Nation) or the Indian Health Service.

Nez told the group that of the eight IHS and PL .638 health districts on the Navajo Nation, seven have decided to go with the IHS. Only the Utah Navajo Health System has decided to be part of the state distribution plan.

Va noted that the IHS plan is pretty much exactly the same as the CDC recommendations. First responders and health care workers will get first dibs, because it makes sense to give priority to the people who are most likely to come in contact with the virus.

“They’re doing it in four tiers,” she explained. “Within the next few months, Tier 1 will get the first doses. That includes people who have direct contact with infected people, like health care workers, and the elderly, who have the highest morbidity (death) rate.”

Teachers and other school employees will probably be in the second tier, and school-age children, who have a low risk of dying from the virus, will be in Tier 3 and 4.

“In order to get things back to normal, we have to vaccinate a majority of the population,” Va explained. “That probably won’t happen until April, May, even next summer.”

This was bad news to the educators, some of whom had hoped to hear schools could re-open in person after Christmas break.

Nez said as of now, the Navajo Nation’s recommendation is for schools to remain online-only through the school year, although “we’ll be re-evaluating that” as new statistics come in. The president said he consults with a team of the Nation’s health experts before making any orders or recommendations concerning the virus.

Nez also pointed out the COVID vaccine is voluntary, and many Navajos have been posting on social media that they won’t take it. He added that most Navajos have had their childhood vaccines, and many get an annual flu shot, so the COVID-19 vaccine shouldn’t be all that scary just because it’s new.

“To have herd immunity, 50% or more of us would have to get the virus, and we’re not willing for that to happen,” he said.

Currently, a little less than 10% of the reservation population has tested positive for COVID.

Nez thanked the Navajo citizens who are staying home and shopping locally whenever possible, saying he believes close to 80% of the population is following the orders now that local grocery stores and gas stations are allowed to remain open between 7 a.m. and 3 p.m. “Our new saying is, ‘Stay local, stay safe,’” he said.