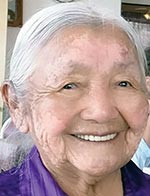 Irene was a homemaker, silversmith, and child of God who enjoyed making rugs. 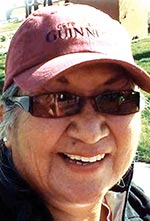 Wilma was born May 10, 1961, in Otis, New Mexico, to Nelwood Werito and Bessie Yazzie, into the ‘Áshįįhí (Salt People Clan), born for Bit’ahnii (Under His Cover Clan). She passed away March 16, 2021, in Bloomfield, New Mexico.

Wilma attended elementary and middle school at Crownpoint Boarding School and graduated from Bloomfield High School. She went on to San Juan College for a few years and worked in Counselor, New Mexico, running the post office, store and apartment complex. Later, she was a deli/baker in Fort Duchesne, Utah.

Wilma was a great homemaker, raising three of her grandchildren, Layne, JJ, and Abigail Lawrence. She served in the U.S. Army for seven years and was honorably discharged.

Cope Memorial Chapel of Kirtland was in charge of arrangements. Those who wish to express their condolences may do so at www.serenityandcompany.com. 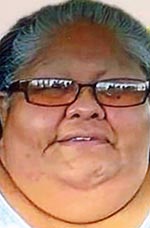 Over 65 years ago — at the age of 10 — Marmon took his first photograph, at the urging of his father. Young Lee’s photo was of a truck accident on New Mexico’s old Route 66, and several weeks later, he sold the photograph to an insurance company investigating the accident.

Since that very first photograph, Marmon has dedicated his life, and his art, to his people, the Pueblo Tribe of Laguna. Publicly, he has become one of America’s premier Native American photographers and one of the country’s greatest contemporary photographers. At home, among his people, he has documented the last 70 years in their lives, guided by his appreciation of their unique current events. He has been there for Laguna, documenting the generations of his neighbors’ families. To this day, he treasures the joy he can give to a friend when he finds their loved one’s image in his files.

Marmon’s collected work displays a technical virtuosity combined with a lyrical beauty achieved only by his having spent hours in the darkroom and by his having a scientist’s grasp of light.

“Christmas Eve at Acoma” shows the San Esteban del Rey Mission illuminated solely by the moon and hundreds of luminarias; “White Man’s Moccasins” communicates irony and wit along with an extraordinary use of light and texture; “Eagle Dancers” provides the perspective of an eagle soaring above as the dancers below make their offering to the master of the sky; and “Buffalo Dancers on a Sand Dunes” connects the viewer with the primordial elements of earth, sky, ritual, and worship.

In addition to portraits of tribal elders, artists, dancers, and holy people, Marmon’s camera has documented the political history of Laguna Pueblo. In 1949, with his 4 x 5 Speed Graphic, he photographed the citizens of Laguna exercising their right to vote, for the first time, in an organized national election.

Almost immediately Marmon’s talent was recognized, and more importantly, appreciated. His photos have been shared with an international audience by the International Gallery of the Smithsonian Museum in Washington D.C., the National Museum of the American Indian in New York City, and the Barbican Gallery in London, as well as at dozens of exhibitions in New Mexico and throughout the American Southwest.

By the 1970s, Marmon was receiving commissions and invitations to work, and to show his work. He has been kept busy by accompanying a delegation of 13 Pueblo Indian potters, organized by Ms. Nancy Winslow, to the White House to meet President and Mrs. Richard Nixon during the administration, and with projects for the American Indian College Fund, and the Denver International Airport.

For the American Indian College Fund, Marmon was the sole photographer for a unique six-month, fund-raising project documenting 30 tribal colleges across the country. For the new International Terminal in Denver, he created 16 photo-murals featuring members of the Southern Ute and Mountain Ute tribes.

Marmon’s work has been published in Aperture, Time, Newsweek, The Saturday Evening Post, New York Magazine, The Los Angeles Times, and dozens of other publications. His artistic prints are in the prestigious collections of the White House, the Smithsonian’s National Museum of the American Indian, the Institute of American Indian Arts, the Indian Pueblo Cultural Center in Albuquerque, and the private collections of well-known, entertainment celebrities. For his work on the PBS documentary “Surviving Columbus,” he won an ADDY Award.

In October 2003, Marmon photos were published in a book of their own. The introduction by his daughter, Leslie Marmon Silko, and other contributors to the project, are also friends of his, poets Joy Harjo, a Muskogee tribal member, and Simon Ortiz from Laguna’s neighboring Pueblo, Acoma.

Marmon’s career included eight years in Palm Springs, California, as the chief photographer for the Cliff Brown Public Relations Firm. His main client was the Bob Hope Desert Classic and Ball where he photographed athletes, dignitaries, and celebrities for Palm Springs Life Magazine.

Sharon was born in August 1948 in San Francisco, California, into the Ta’neeszahnii (Tangle Clan), born for ‘Áshįįhí (Salt People Clan). She passed away April 11, 2021, in Fort Defiance.

Sharon earned a master’s degree in social work and worked for the Navajo Tribe and Veterans Administration. She enjoyed spiritual healing and was a member of the Native Sundance community.

Sharon is preceded in death by her parents, Nora Cleveland and Mike Ford.