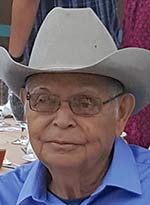 Tommy was born on Jan. 9, 1936, in Crownpoint, New Mexico. His clans are Sagebrush Hill People (Ts’ahyiisk’idnii), born for Sleep Rock Clan (Tse’nabahilnii). His maternal clan is Salt People Clan (‘Ashiihí), and his paternal clan is Zuni People (Naasht’ezhi Diné’e). He was born and raised in Crownpoint where he spent much of his youth herding sheep and taking care of the family’s horses and cattle. As the youngest child of the family, Tommy was always near his parents and his brothers and sisters and they spoke primarily in Navajo. It wasn’t until he went to school that he began to learn and speak English.

Tommy attended elementary school and junior high school at Rehoboth Christian School in Rehoboth, New Mexico. At Rehoboth, Tommy learned about the Christian faith and the Bible and that was something he held onto the rest of his life. In 8th grade, after his older brothers Art and Olsen came to get him, he transferred to Gallup High School where they were able to all go to school and play sports together. Tommy often said that was one of the best decisions he ever made in his life. He said that they were proud to play ball and run track for the Gallup High Tigers. Tommy graduated from GHS in 1955.

As a Gallup Tiger, Tommy was an excellent student and all-around athlete. He competed at the varsity level all four years of high school in football, basketball and track and field. As a junior and senior, Tommy was named to the New Mexico North All-State Team in football and basketball and was selected to the New Mexico Boys State program in 1955 where he studied state government. Along with his older brothers Leonard, Olsen and Art, and his uncle Paul Arviso, Sr., Tommy competed in the local rodeo circuit as a steer rider and bull rider and was a proud member of the Gallup High Rodeo Team. While at Gallup High, Tommy met his future wife, Katherine Watchman. They were wed on Dec. 30, 1956 and started a family not long after, eventually raising four children. Tommy and Katherine were together until Katherine died in 1992.

Tommy spent his freshman year in college on an athletic scholarship to play football and basketball at Arizona State College in Flagstaff, now known as Northern Arizona University. He started at running back for the junior varsity team his first year. But in basketball, he suffered the wrath of a mean, racist coach and spent most of his time on the bench with his other minority teammates. At the conclusion of that season, Tommy vowed he would never again put up with that kind of racial abuse and he left the team. Later in life, Tommy returned to NAU and earned his bachelor’s degree in business administration in 1972. He also earned his master’s degree in 1981 from the University of New Mexico in Albuquerque.

Tommy was employed for many years with the Bureau of Indian Affairs, Window Rock Unified School District and the Navajo Tribe. He was the general manager of the Navajo Tribal Fair and the tribal fairgrounds in the late 1960s and retired from the Navajo Nation Workforce Development Program in 2008. Tommy was an original member of the All Indian Rodeo Cowboys Association (AIRCA) and competed for many years in local rodeos as a calf roper and team roper. During the 1960s, Tommy was active in the men’s basketball leagues and All-Indian tournaments and played with the Window Rock Lodgers, Navajo Inn Redmen and the Navajo Nationals. Some of his teammates included Jack and Dean Jackson, Leo Watchman Sr., Ernest Tsosie Jr., Howard Draper, Tom Conley, Bill Frazier, Tom Gorman, Jack Pate, Pat Cleveland, Art Hubbard and Peterson Zah.

In his later life, Tommy enjoyed playing golf with his family, co-workers and his many friends. He thoroughly enjoyed spending quality time with his nieces, nephews, grandchildren and great grandkids, telling them stories of his childhood, urging them to take care of the land and the sheep and cattle, and to always remember who they were and where they came from. He encouraged everyone to pray often, to love one another and to take good care of themselves mentally, physically and spiritually. He spoke proudly of maintaining and respecting family traditions and history, Mother Earth and the environment, and all animal life. 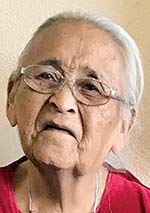 HEARTBUTTE, N.M. — Bessie Slim of Heartbutte, New Mexico, passed away April 3, 2020, at the University of New Mexico Hospital in Albuquerque.

Bessie was an exceptional wife and mother. She treasured her children and embraced every moment with them. She especially loved her role as a grandmother to 35 grandchildren and 49 great-grandchildren. She had a very caring personality and always made people around her smile. She made friends everywhere she went.

Throughout her young life, Bessie herded sheep, weaved and did silversmith work. She loved to work on puzzles, watch food and sewing tutorials, and work on arts and crafts during her spare time.

Bessie was a proud member of the Native American Church and was an active member in her community.

Bessie is preceded in death by her parents, Joe and Emma Saunders; and husband of 56 years, Johnny Slim. 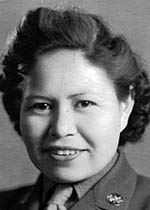 Esther was born June 20, 1920, in Sheep Springs, into the Tl’ááshchí’í (Red Bottom People Clan), born for K’aahanaanii (Living Arrow Clan). She passed away March 30, 2020, at the Little Sisters of the Poor in Gallup.

Esther graduated from Wingate High School in 1935 and worked as an educational aide with the Bureau of Indian Affairs taking care of children. She enjoyed watching TV, cooking, playing with puzzles and walking around outside.

Esther is preceded in death by her parents, Mary and Charles Denetclaw. 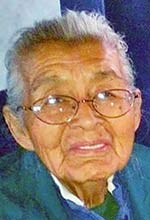 TOHATCHI, N.M. — Rose Alice Nez, 86, of Tohatchi, New Mexico, passed away March 29 with her family by her side. She was laid to rest next to her husband on family land in Tohatchi.

Rose was born Feb. 22, 1934, to Louise Manuelito and Gilbert Dennison, into the Tł’ógí (Hairy Ones Clan), born for Kinłichíi’nii (Red House People Clan).

In her childhood, Rose cared for her family’s livestock and then attended the five-year program at Stewart Indian School in Carson City, Nevada.

Rose married Frank on Sept. 16, 1952. For 64 years, Rose and Frank kept their agreement that he would work outside the home and she would care for the household and their children.

Rose was a descendant of Juanita and Manuelito, past leaders of the Diné.

Funeral arrangements were provided by Daniels Family Funerals and Cremations of Albuquerque. 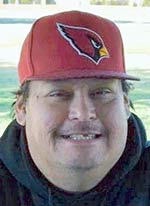 Joseph graduated from Page High School in 1988 and attended the University of Arizona in Tucson.

Joseph worked at Safeway and was a beloved co-worker and union steward.

Joseph is preceded in death by his maternal and paternal grandparents.

A memorial service will be determined at a later date.

Zhean worked for the railroad for 30 years and enjoyed ranching.

Zhean is preceded in death by his beloved wife, Lily Attakai.

Due to the COVID-19 virus, shelter in place mandate and observance of social distancing, there will be no meetings or services/receptions. We care for everyone that would have liked to be in attendance.

Donations may be sent via Zelle to Willette Edwards at 928-606-5110 or call for information.

CHINLE — Graveside service for Parker Randy Clah, 68, of Chinle, were held April 2 in Chinle, with Ben Begay officiating. A memorial service will be planned at a later date.

Parker was born July 7, 1951, in Parker, Arizona, into the Tl’ízí lání (Many Goats Clan), born for Deeshchii’nii (Start of the Red Streak People Clan). He passed away March 29, 2020, in Fort Defiance.

Parker graduated from Chinle High School and attended Central Arizona College. He was employed as a land surveyor with the government and Navajo Tribe.

Parker is preceded in death by his parents, Harry Clah and Florence Foley; brothers, Harry Clah Jr. and Chester Clah; and Edward Tah.

Honorary pallbearers were family and friends.

NAZLINI, Ariz. — Graveside service for Jerrold Van Teller, 43, of Nazlini, Arizona, were held April 3 at the family plot in Nazlini.

Jerrold was born Aug. 2, 1976, in Fort Defiance, into the Deeshchii’nii (Start of the Red Streak People Clan), born for Tó’aheedlíinii (Water Flow Together Clan). He passed away March 26, 2020, in Chinle.

Jerrold attended Chinle High School and one year at Diné College. He worked in the carpentry industry for various companies and unions as a welder, metal stud framer and dry wall. He also worked for Pic-n-Run as an automotive technician.