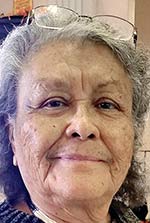 WHITEHORSE LAKE, N.M. — Funeral services for Carolyn Tolino Sandoval, 72, were held Jan. 29 at the Seven Churches Pentecostal Church in Whitehorse Lake, New Mexico. She was laid to rest on the family plot.

Carolyn had the mindset of a queen and the heart of a warrior. She was emotional, yet the rock for many. Tired, but kept going. Worried, but was still full of hope. Impatient, yet patient. Overwhelmed, but never quit. Amazing, even though she had doubts. Wonderful, even in chaos. Life changer, every single day.

Carolyn taught her children and people who asked her for advice that you can rise up from anything. You can recreate yourself. Nothing is permanent. You are not stuck. You have choices. You can think new thoughts. You can learn something new. You can create new habits. All that matters is that you decide today, to never look back and never quit. 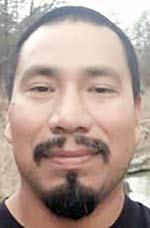 BIXBY, Okla. — Funeral services for Warren Wesley “Wes” Yazzie, 45, of Bixby, Oklahoma, were held Jan. 27 at the Clearview Baptist Church in Broken Arrow, Oklahoma, with Gary Hawkins officiating. He was laid to rest at Vernon Cemetery in Coweta, Oklahoma.

Wes was born Sept. 24, 1975, in Lawton, Oklahoma, into the Gonal Clan, born for the Wind Clan of the Muscogee Creek Nation and into the Tó’adeedlíinii (Water Flow Together Clan). He went to be with his Lord and Savior on Jan. 21, 2021, in Bixby.

Wes was the son of Das and Margie (Coon) Yazzie, the grandson of Mary (Berryhill) and Arthur Coon Sr. of Sasakwa, Oklahoma, and Bessie (Burbank) and Frank Yazzie of Fish Point, Arizona.

Wes’s passion for volleyball was born when he was 16 years old playing in the U.S. Volleyball Association with his dad as his teammate for over 20 years. He continued his love for the sport and became an avid player and was considered a well-respected teammate and referee.

Wes relocated to Tulsa, Oklahoma, and worked with his dad at Diversa Graphic as a paper cutter, die-cutter, and forklift operator for five years before committing to be a full-time dad to his children. At the time of death, he was employed by Paragon Technologies in Sapulpa, Oklahoma.

Wes’s spiritual life began at five years old when he accepted Jesus as his Savior and was baptized by the late Johnny Buckner at El Reno Indian Baptist Church in El Reno, Oklahoma.

Wes had a magnetic personality as people were drawn to him through his genuine heart and good-natured character. His hobbies included spending time with his children, fishing, volleyball, camping, fixing cars, hunting, boxing, construction, weaponry, spending time with his brother and loved ones, and challenging his parents in dominoes.

Wes would go out of his way to help others and would give anything he had to help them, and he once said to his mom that he always put other people’s needs before himself. He never left without bestowing a kiss on his loved ones.

Wes is survived by his children, Isaac, Nevada and Lilee Yazzie of Bixby; parents, Das and Margie Yazzie of Coweta; fiancé, Jessica Armstrong and baby on the way; sister, Zena (Yazzie) Stafford of Sallisaw, Oklahoma; brother, Jerome Yazzie of Broken Arrow; and six nieces, eight nephews, two great-nieces, seven great-nephews, and numerous other relatives and friends to mourn his passing. 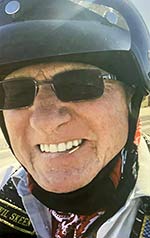 MONTROSE, Colo. — Robert (Bob) Elliot Kerr, 77, passed into glory on Jan. 27 from complications of COVID-19 at Montrose Memorial Hospital in Montrose, Colorado. He was born Dec. 28, 1943, to Henry and Carol Kerr in Standish, Michigan.

Bob spent his childhood in Saginaw, Michigan, and graduated from Saginaw High School. Right after high school he joined the U.S. Army and served from 1962 until he was honorably discharged in 1965.

Bob lived in Rehoboth, New Mexico, for 28 years and worked at Rehoboth Christian School in the kitchen, doing maintenance and driving the bus, and also at Rehoboth Hospital. He lived in Denver for 15 years before moving to Montrose in 2018 to enjoy the small-town life.

Bob’s favorite mode of transportation was his motorcycle, which he rode almost every day, rain or shine. He retired in 2005 and loved nothing better than a motorcycle ride and a cappuccino.

Bob was a member of Trinity Reformed Presbyterian Church of Montrose. He was a humble, gentle, caring man who loved the Lord and made friends with everyone he met. He regularly attended AA meetings and talked easily with struggling people. He will be missed greatly.

Bob is survived by his wife of 53 years, Phyllis; daughters, Lynn (Eddie) Padilla of Medford, Oregon, and Jennifer (Merle) Bates of Gallup; brothers, Ken (Pat) and David (Joyce), both of Michigan; and four grandchildren and many nieces and nephews.

Bob is preceded in death by his parents; brother, Louis; and sisters, Leona and Ilene.

A virtual service will be live-streamed and recorded on Feb. 20, 2021. https://youtu.be/vrHJ-bDXGCU.

Angela was a homemaker. She was born in Coalmine, New Mexico, into the ‘Áshįįhí (Salt People Clan), born for Kinyaa’áanii (Towering House Clan). She passed away Jan. 30, 2021, in Albuquerque.

WINSLOW, Ariz. — Funeral services for Marjorie Crosby, 64, will be held today, Feb. 4, at 1 p.m., at Greer’s Mortuary in Winslow, Arizona. Burial will follow at the Desert View Cemetery in Winslow.

GALLUP — Graveside service for Daniel Largo Sr., 64, of Pinedale, New Mexico, will be held Tuesday, Feb. 9, at 10 a.m., at Sunset Memorial in Gallup.

Daniel was born July 26, 1956, in Fort Defiance, into the Dziltl’ahnii (Mountain Cove Clan), born for Tsin sikaadnii (Clamp Tree Clan). His nalí is Tó baazhní’ázhí (Two Who Came To the Water); cheii is Zuni. He passed away Jan. 31, 2021, in Albuquerque.

Daniel attended school up to the 9th grade and worked for Gallup McKinley County Schools where he retired after 24 years. He created D. Largo Rodeo Company and was a stock contractor and rancher who loved the Dallas Cowboys and spending time with his children and grandchildren.

Donations can be made to Rollie Mortuary in Daniel Largo Sr.’s name.

A drive-thru reception will take place at the Shirley residence in Deer Springs, following service.

Franklin attended Window Rock High School where he played basketball and served two years in the Air Force as Airman First Class. He was employed at Navajo Housing Authority and Window Rock School District as a warehouse supervisor.

Franklin, or Dewey, as most of his friends and family would know him, played drums for the Navajo Tribal Band for close to 20 years.

A GoFundMe account has been set up (search under Franklin Dewey Hubbard Memorial Fund) to help his daughter and grandchildren cover funeral expenses.

CHINLE — Graveside service for Elliott Towne, 50, of Chinle, was held Feb. 3 at the Chinle community cemetery with Ben Begay officiating.

Elliott was born Sept. 9, 1970, at Sage Memorial Hospital in Ganado, Arizona, into the Kinyaa’áanii (Towering House Clan), born for Táchii’nii (Red Running Into the Water People Clan). He passed away Jan. 27, 2021, at St. Joseph Hospital in Phoenix.

Elliott graduated from Chinle High School and earned a bachelor’s degree in fine arts from Arizona State University. He worked several years in the Phoenix area as a graphic designer and later worked for the University of Phoenix as an evaluator for 10 years.

In addition, Elliott did freelance graphic design for various companies and recently began his own company, Elliott Artwrx and Design, LLC. He enjoyed creating designs on the computer by making brochures, cards, posters, and creating web designs.

Elliott was creative, smart, hardworking, and had a passion for making people laugh. He enjoyed listening to 80s music and watching science fiction movies like Star Trek and Star Wars.

Dear brother, friend and son, we will remember your kindness and smile in our hearts. You will be deeply missed.

Elliott is preceded in death by his brother, Everett Towne.

CHINLE — Graveside service for Layton Brandon Eskeets, 21, of Chinle, will be held Monday, Feb. 8, at 10 a.m., in Chinle, with Oscar White officiating.

Layton graduated from Chinle High School in 2019 and was a labor worker for Cooling Towers. He enjoyed rapping, playing basketball and spending time with his friends.

Layton is preceded in death by his brother, Lance Eskeets.

A curbside drive-thru reception will take place at the Riverside House No. 154 in Chinle, following service.

CHINLE — Graveside service for Lance Ryan Eskeets, 17, of Chinle, will be held Monday, Feb. 8, at 10 a.m., in Chinle, with Oscar White officiating.

Lance was currently a senior at Chinle High School. He enjoyed riding horses, playing games on his Xbox, playing basketball, and spending time with his niece and friends.

Lance is preceded in death by his brother, Layton Eskeets.

A curbside drive-thru reception will take place at Riverside House No. 154 in Chinle, following service.