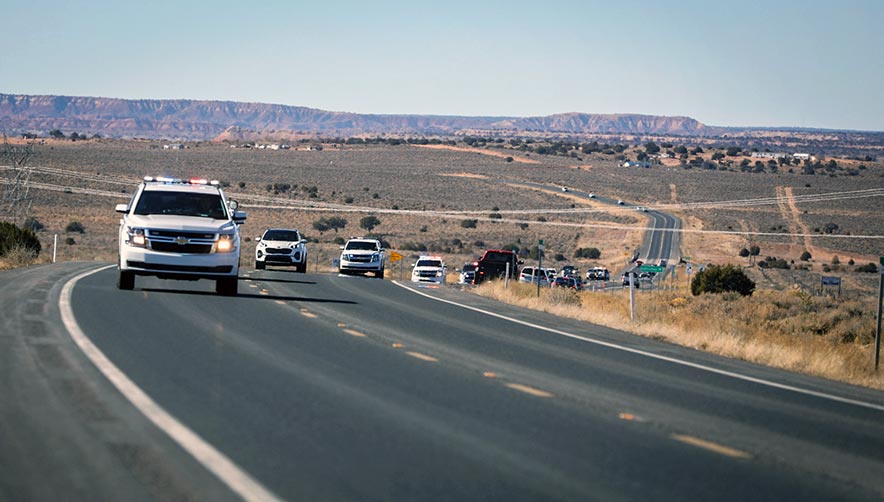 Navajo Times | Sharon Chischilly
On Thursday, Navajo Nation Police escort the hearse carrying former Navajo Nation President Albert Hale from Phoenix to St. Michaels in this view east of Ganado. Hale passed away on Feb. 2 due to complications from COVID-19.

Albert Hale, the second president of the Navajo Nation, died Tuesday, Feb. 2 of complications of COVID-19. He was 70.

Hale served as president from 1995 to 1998. He came back to politics in 2004 when he was appointed by Gov. Janet Napolitano to fill the Arizona State Senate seat vacated by Jack Jackson Sr., who had retired. He was elected to the post in 2006 and 2008. 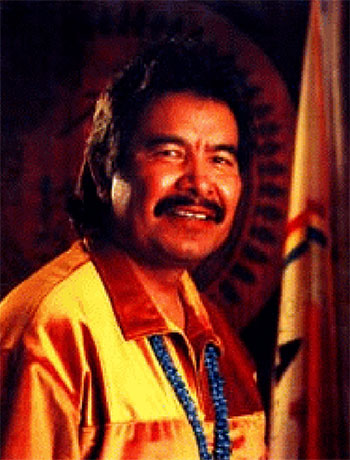 In 2011, after terming out in the Senate, he was elected to the Arizona House of Representatives and served two terms.

In the Legislature, Hale was a proponent of Arizona’s tribes getting their fair share of the transaction privilege tax, and compensation for uranium mining on tribal lands. As chairman of the Navajo Nation Water Rights Commission, he was instrumental in negotiating the San Juan River Basin Water Rights Settlement with the state of New Mexico, which brought water to many Navajo communities.

Hale was born in Ganado, Arizona, in 1950 and raised in Klagetoh, Arizona. He liked to tell the story of the late Annie Wauneka shaming him into continuing his education when she caught him playing hooky one day. It must have worked, because after graduating from Wingate High School, he went on to earn a bachelor’s degree from Arizona State University and a juris doctor from the University of New Mexico School of Law.

After going into private practice for a while, he was appointed as a judge pro tempore for the Laguna Pueblo courts. His next appointment was as assistant attorney general and special counsel to the Navajo Nation Council.

While Hale was forced to resign the presidency in 1998 rather than face a 50-count indictment for allegedly misusing tribal funds, his colleagues said he redeemed his legacy in the Legislature. Jack C. Jackson Jr. served in the statehouse with Hale for a decade. He recalled Hale as a “dauntless” lawmaker who was passionate about addressing the needs of his tribal and rural constituents in District 7.

“Whenever he spoke, most people listened with deep respect especially when he was wearing his atsá cha’h, the traditional Navajo warrior hat he was famous for wearing at significant occasions,” Jackson recalled in an email to the Times.

Peterson Zah, who served as Navajo Nation President before and after Hale, said Hale represented the first generation of Diné lawyers. In the 1960s and 70s, he said, young Navajos were going into law “so that the Navajo Nation would always be represented by our own people in court, government and the negotiation process to protect our natural resources.” Zah also lauded Hale’s lifelong dedication to improving education on the Navajo Nation.

Current Navajo Nation President Jonathan Nez remembered Hale’s “love and compassion for our people.” “He was known by many as ‘Ahbihay’ and always greeted everyone with a smile and shared his humor with all,” Nez wrote in a statement. “He stood strong on many issues and left the world a better place than he found it.”

Stated Speaker Seth Damon, “The Navajo Nation prays for the family and relatives of our leader, Hon. Albert Hale. As a former president of the Navajo Nation, he is remembered for his service and dedication to the Navajo people, which continued beyond the borders of the Nation when he was called to represent our district in the Arizona Legislature. “We recognize his positive contributions to the development of numerous initiatives that have advanced the causes of Navajo people both at home and abroad,” Damon said.

Navajo Nation Supreme Court Chief Justice JoAnn B. Jayne said Hale contributed to tribal sovereignty “as an attorney, jurist, and president. “As a statesman, Senator Hale, and later, State Representative Hale, represented constituents with honor and success to secure rights and justice and restored resources for the people through his leadership and determination,” she wrote in a statement.

Hale’s family released the following statement: “The Hale family appreciates the outpouring of prayers and condolences for our mighty leader Albert Hale. The Navajo Nation knew him as Ahbihay but we knew him as a loving and supportive dad and husband. “He deeply cared for our Diné Nation and people. His contributions were immense and we know that his work as a leader and lawyer impacted so many lives. We will carry on and honor his legacy as a leader and traditional man.”

Nez and Vice President Myron Lizer issued a proclamation calling for all flags on the Navajo Nation to be flown at half-staff through Saturday in honor of Hale. Arizona Gov. Doug Ducey ordered flags throughout the state to be lowered to half-staff Wednesday.