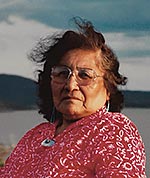 KAYENTA — Funeral services for Isabel M. Kitsale, 96, of Kayenta, were held Jan. 5 at Our Lady of Guadalupe Catholic Church in Kayenta. Interment followed at the family site near Chilchinbeto, Arizona.

Isabel was born the summer of June 15, 1922, in the Chilchinbeto region, into the Tó’aheedlíinii (Water Flow Together Clan), born for Tó’áhaní (Near the Water Clan). She passed away Dec. 30, 2018, in Gilbert, Arizona.

Isabel attended Fort Wingate School before World War II intervened, and worked at several occupations before being employed for over 30 years with the BIA Boarding School in Kayenta, before retiring. Isabel had many interests from traditional activities to modern, with a strong interest in travel, visiting her many loved ones, arts and crafts, and basketball.

She found giving and receiving love with her family and friends the most enjoyable.

Desert Ridge Mortuary of Tuba City was in charge of arrangements. 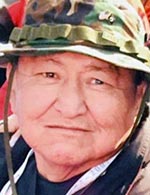 FORT DEFIANCE — Funeral services for Lee Christopher Bitsuie, 76, will be held Friday, Jan. 11, at 10 a.m. at Our Lady of Blessed Sacrament Catholic Church in Fort Defiance. Burial will follow at the Fort Defiance Veterans Cemetery.

Lee was born and raised on the Navajo Reservation. He attended and graduated from Chilocco Indian School, Oklahoma, and joined the U.S. Army and served his country honorably. Lee’s bravery on the battlefields in the Vietnam War earned him a Purple Heart and other commendations for his dedication and bravery. He served with the 25th Infantry Division, carrying out daily and nightly search-and-destroy missions, and was wounded by enemy fire.

Lee spent weeks in an overseas hospital before returning to the frontlines to serve out his tour of duty. He returned to the United States and back home on the Navajo Reservation. Lee served out his enlistment term and received an honorable discharge. The U.S. Veteran Administration certified him as 100 percent disabled American war veteran, receiving full medical and hospitalization at veteran clinics and hospitals.

The discipline and patriotism he learned in the Army never left him, as friends and family will attest. Upon returning to civilian life, Lee held various jobs and positions within the Navajo Nation government, including Navajo law enforcement and other services until he retired. He returned to the original family farm and sheep camp where he took responsibility of overseeing the family farmland and caring for the livestock.

He graciously assumed stewardship of the family grazing area and the environment.

Lee spent several years, commanding the Steamboat Veterans Organization and sought to build on the obligations, responsibility and duties of community veterans, including flag-raisings during special events, flag-bearers in parades, veteran funerals and distributions of funds to the veterans and their families. Lee was never a stranger and was known for helping anyone he came in contact with. He was close to his family and relatives.

He, his sheep and sheepherder dogs were well known in Steamboat community.

Lee is also survived by his aunts, uncles, cousins, nieces, nephews, many friends and military comrades.

Pallbearers will be named by immediate family prior to the funeral service. The family will receive relatives and friends following services at Our Lady of Blessed Sacrament Catholic Church facility in Fort Defiance. Summit Mortuary of St. Michaels, is in charge of arrangements. 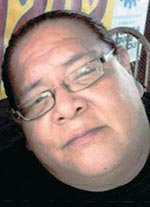 GALLUP — Funeral services for Lewis E. Becenti Jr., 40, will be held Friday, Jan. 11, at 10 a.m. at Rollie Mortuary in Gallup. Burial will follow at the Sunset Memorial Park.

Lewis was born Sept. 22, 1978, in Gallup, into the Áshiihí (Salt People Clan), born for Kinyaa’áanii (Towering House Clan). He passed away Jan. 5, 2019, in Albuquerque. Lewis was known as “King Louie” and enjoyed watching his favorite NFL team, the Tampa Bay Buccaneers, attending concerts, playing pool and basketball, and spending time with his family and granddaughter.

Jerome received his high school GED and was employed in construction. He enjoyed horses, playing football and basketball, and was a Dallas Cowboys fan.

A reception will take place at the St. Michaels gym following services. The gym will open at 8 a.m. for those who would like to set-up food for the reception.