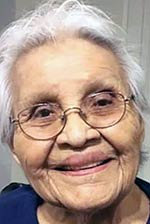 GALLUP — Funeral services for Stella Mae Freeland, 88, of Crownpoint, will be held Friday, June 18, at 10 a.m., at the Rollie Mortuary Chapel in Gallup, with Pastor Aaron Nelson officiating. Burial will follow at the Crownpoint community cemetery.

Stella attended Sherman Institute in Riverside, California, and worked as a dorm aide at Crownpoint Boarding School and manager at the Crownpoint Senior Citizen Center. She enjoyed sewing, crocheting, cooking, ceramics, and gardening. 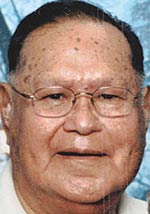 As a youth, Herbert worked at an ice plant in Kansas City. He also worked for NFPI, NHDE, and the Navajo Nation, retiring as manager of Red Lake Chapter House.

Herbert enjoyed watching western/war movies and game shows, traveling, and telling jokes in Navajo. He loved sports and was a fan of the San Francisco 49ers. 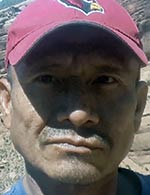 Garrick was born Feb. 5, 1979, in Albuquerque, into the Tódích’íi’nii (Bitter Water Clan), born for Honágháahnii (One-walks-around Clan). His maternal grandfather is Kinyaa’áanii (Towering House) and his paternal grandfather is ‘Áshįįhí (Salt People). He passed away May 23, 2021, in Phoenix.

Garrick received his high school diploma from Many Farms High School and attended Fort Lewis College, receiving a construction certificate from Navajo Technical University. He was a skilled carpenter and operated his own business doing home renovations and construction.

Garrick loved cooking for the family and was an expert cook at various restaurants in Chinle and Winslow, Arizona. He was multi-talented and enjoyed listening to music. His favorite teams were the Phoenix Suns and Arizona Cardinals.

Garrick volunteered to help his relatives and made monetary donations to strangers. He loved his children, family and welcomed visitors to his home offering them refreshments or cooking for them.

Garrick will be dearly missed by his wife, children, siblings, and family. We will miss his friendly greetings and his personality of a happy-go-lucky person. 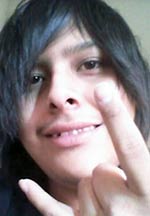 GALLUP — Funeral services for Jerry Elwood Sr., 88, will be held Monday, June 21, at 10 a.m., at Rollie Mortuary in Gallup. Burial will follow at the Gallup State Veterans Cemetery.

Jerry was a Korean War veteran and served proudly as a sergeant in the U.S. Marine Corps. He has lived in and raised his family in Standing Rock, New Mexico, since 1975.

To-go food will be served at the Gallup Community Service Center (across from the Food Pantry) in Gallup, following services.

Lillie is in the care of Desert View Funeral Home in Shiprock.

As a Korean War veteran, Paul served in the U.S. Marine Corps from 1950 to 1954. He worked for the Window Rock Unified School District, chapter official for Red Lake No. 18 Chapter, General Dynamics, and General Electric.

Paul is preceded in death by Julia R. Milford and Nathan R. Deal.